Well, it’s December 1st and, as promised, it’s time for SL Naturist or, rather, the ‘keynote’ review that forms the central part of the blogozine. And I’m beginning ‘Issue 1’, for real, with a review of the Su Casa naturist sim.

I’ve already blogged about what I think makes a great naturist sim, and Su Casa has it in spades. Not too much clutter, a sense of space, some different geography and some stuff you can do. Not overly huge, which means people are concentrated for the social element, and easily walked round in a few minutes.

I’m going to begin the tour with what I think is a fantastic, fabulous idea…art in the landscape. There are two displays of public art at Su Casa, and I shall be exploring the artists and their work more in subsequent postings. You can buy the works, and some are freebies which will look great on your apartment walls if you have a SL home. What I admire is the interactivity of the concept, and I presume these are RL artworks imported into SL, and demonstrates what an artistic, creative bunch of people you SL users are! 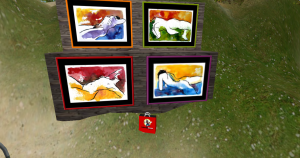 I’d like to see more of this sort of thing in SL (I’m sure it exists, it’s just that I’ve not encountered much of it before), particularly if the works are beautiful line drawings of nudes. I know little of art, other than what I like and don’t like, and I like what I’ve seen at Su Casa. As I say, I’ll drop the artists in question an IM and feature their work(s) in future posts. The blog won’t be just about nudism, but about the people involved in the SL naturist world too! Is that ‘naturism’? I think it is, because growing up used to seeing copies of UK naturist magazine ‘H&E’ in the house, I would read articles about people who were painters, sculptors and so on, who just happened to be nudists. It’s all valid for this blog.

Moving on, we come to the Su Casa balloon. Now, I’ve taken this balloon ride, and previously blogged it when contributing to another SL blog, but I can only encourage you to grab that balloon and take your camera. Stunning views from a lazy, slow moving perspective that draws your attention to things you wouldn’t see either at ground level or flying around. It’s easily worth 10 minutes of your time. 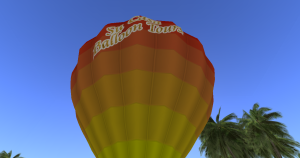 I feel a sense of ‘space’ at Su Casa, and this is demonstrated by the ‘replicating real life’ feel of the beach. Not overly cluttered, and a delightful short walk to the harbour cafe. That looks like an intelligently thought out sense of geography at the sim. In real life, mid-afternoon, mid-tanning session, sometimes it’s necessary to cool down, and a lazy wander to an ice cream vendor, or a cafe, is just perfect. I look forward to meeting more Su Casa users at the sim and, if it gets too hot, maybe doing the interviews in the cool shade of the cafe. 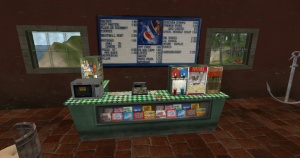 Walking around, the scenery is great, too. It feels good and with perspective. I stopped to admire the view over an inlet, where a yacht’s moored, for example, and it feels idyllic. 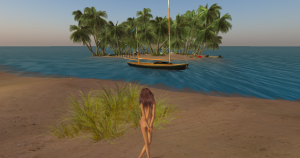 By now, having forgotten my sun tan oil, the heat was beginning to bite on my shoulders, so I popped into the beach showers to cool down further. What could be nicer than taking a cooling shower while looking out over a flat calm, sun drenched sea? 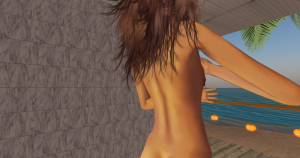 And what’s on that little island over yonder, I hear you ask. Let’s look! There’s a lovely little social area, complete with barbecue. Nice shade from the trees, too, so I sat for a while to drink the bottle of lemonade I’d purchased in the cafe, and to scribble some notes for the blog. 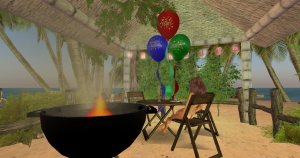 After a while I felt suitably invigorated to move on, and explore the rest of the sim, discovering a rezzable jetski point. Well, I posed for the cameras, but there’s no way I’m opening the throttle on that thing!!!! Whenever I jetski, I’ll end up rolling and tumbling up a beach, about 1/4 mile away from where I’d planned to go. Jetskis and me don’t work. I suppose I could also have tried surfing, as there are also rezzable surfboards, but again, surfboards and I don’t agree, so I passed on the opportunity to try it out. 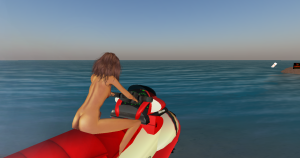 I did, however, find the Italianate styled jacuzzi, which I’m going to get back and try, soon. It looks like it, too, could be a wonderful relaxing experience with great scenery all around it. 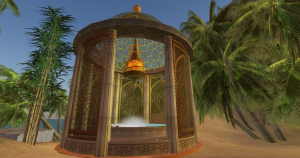 By this stage the sun was beginning to go down, and my previously burnt shoulders were now feeling a bit of a chill, so I climbed up to where a fire was burning and sat down to warm up a bit before tp’ing home to get blogging and reflect on a lovely sim that is well worth visiting, and staying at for some time. Note the absence of sex poses, too, always a plus in my view, as sex in public isn’t  part of RL naturist culture, and I commend the sim owners for their successful attempt to replicate a RL naturist beach vibe. 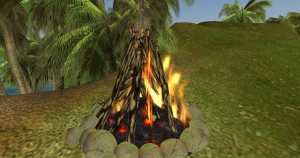 What haven’t I mentioned? Lots! The idea of this post has been to provide a simple overview of the sim and its range of activities, and that’s an approach I’ll adopt in reviewing further naturist spots in SL. Before someone mentions the fact, I’ll point it out. Yes, I’m not heavily featured in the photos, because the blog isn’t about me. It’s about you, the users of SL naturist places. And yes, there’s not too many of the most important element of any sim (naturist or otherwise), the people, featured. That will follow. The intention, with this post, has been to simply get things rolling and do a more comprehensive overview of a sim and its features. But the most important feature of all -you- will follow in due course.