As a keen, amateur, RL photographer (who has occasionally done nude/glamour work), I sometimes surf across websites, blogs, flickr, Picasa, etc to see how other photographers work, and learn from their work. And, sometimes, I will see a photograph, not necessarily nude/glamour, that I admire, and think I might try to replicate in the context of SL. 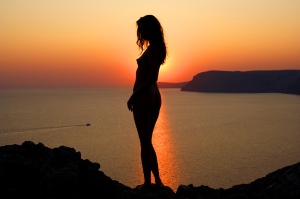 The photograph (above) is one such picture.

So, having rounded up a model (thank you, Josephine!) I attempted to re-create this beautiful photo at Buffy’s Cove, a naturist location in SL, and one that has enough of a big sky, open sea and stunning sunset, for me to attempt to re-create it.

The results are above and below.

I hope you like them, and if you’ve seen any photographs that you think you’d like to see re-done for SL, IM me and I’ll get the camera out and try to do a SL equivalent.

I would also be delighted to see your own attempts to re-create the (RL) photo at the top of the page. Feel free to send me your own efforts, and I’ll pick out the best and give L$100 to the photographer who, in my opinion, has re-created the scene best. (Entries for this competition close on Saturday, March 31st, 2012, at midnight SLT. Winner will have their photo published on the SL Naturist website, and be announced during the week commencing Monday, April 2nd. My decision is final! 🙂 )