What’s the relationship between ourselves and publisher Howie, I’ve been asked on occasion, the inference sometimes being that we bump pixels 🙂

Nothing could be further from the truth. There’s a few proper gentlemen around SL (Rok at NWAT, Elbag at Eden being others…funny how some of the prime movers and shakers in SL naturism are all nice guys!!!!)

Essentially, Howie and I bumped into one another at the Manatee naturist sim (now defunct) within days of us joining (although I predate him by a week or two) and hit it off. We’ve been SL friends since, and back then I think his framework for his SL was to look at music production within and exclusively for the grid.

We kept in touch, saying ‘hi’ on occasion when we were both online, and sometimes running into one another at naturist locations (he’s a RL naturist just as I am).

One or two of our naturist friends from real life have even ended up joining SL as a result of our enthusiasm, and I know that one current player was ‘converted’ to the SL cause as a result of my writing the ‘Postcards from Spain’ series away back in the summer and now appears in my friends list from time to time when I log in.

Howie’s role, as someone who claims not to be able to write (in a journalistic sense) or build anything, has been to effectively bankroll SLN. Yes, it’s naturism, so there’s no need to go to him and ask for L$800 for a ball gown, but whatever items I need to make this a full, rounded, as realistic as possible experience of virtual naturism, he’ll fund.

The ‘bras and panties on a line’ we used in a recent post, to illustrate how naturists hang swimwear from their beach umbrellas…that was Howie’s L$40, for example. It’s small stuff like that. Poses? Howie funds it. Sarongs, beach bags…sunglasses…all Howie’s doing. The cost of the imminent ‘Moonella’ Group, Howie’s money. Uploading of photos…Howie’s money. The beach house that is sometimes used for photo locations…Howie’s. That said, I do fund some of it myself, I’m not a freeloader, lol.

I mentioned Rok, at NWAT. That’s another fella with a big, generous heart and terrific outlook to SL, and both of them have a willingness, each in their own way, to improve and enhance the SL experience for others for nothing other than thanks.

So thank you guys, I owe both of you big time for your friendship and generosity. 🙂

And what Howie has is an enormous number of SL friends, almost all from the naturist community, or converts to it as a result of his enthusiasm. One or two of our models over the past year have been recommendations from Howie.

So Howie had a party at his home recently, to celebrate St.Nicholas’ day, and Harry spent a lot of time there shooting pics. Below, we offer a selection of what appears to have been a fabulous naturist social gathering in SL. They’re a lot of fun, and if you get an invite to any of these events, make an effort to attend. Rok also holds such events. ‘Eve’s Party Pier’ at NWAT is designed for just that purpose. I missed the last one (it began long after my RL bedtime) but I bet it was a blast, too. 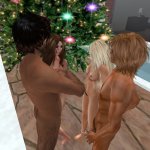