We’ve set up this little scenario by way of introducing the theme for the next issue of SLN (available in June).

In it, we’re going to ‘blur’ the edges between SL & RL naturism, linking to many external websites, and providing a guide to naturism around the world and how that is reflected (or not) in SL.

As you’ll all know by now, I’m very keen that SL sims display ‘genuine’ naturist tendencies. Nudity, yes, but not as a pretext for sex. A proper naturist sim isn’t just a short cut to a ‘free sex beach’.

This is misunderstood by many avatars (and, come to that, many people in RL), a view reinforced by lazy journalism determined to galvanise an oft held view that ‘nude = rude’. It isn’t. In its proper context, naturism is simply people enjoying social beach (and related) activity without the need for clothes. It isn’t necessarily ‘sexual’. Indeed, spend some time on a naturist beach with its variety of ‘imperfect’ bodies (in the eyes of the fashion industry and media, all reinforcing unfeasible body stereotypes) which are all ‘perfect’ in their own way. There’s no shame, and no need for it. Everybody is beautiful, naked. Every body is beautiful, naked.

I’ll pick up on this in an extended editorial (the next issue will probably be our most text heavy issue to date, and work has already begun on it) in SLN9. There’s no need for me to write that editorial for you right now, when publication’s maybe eight weeks away! 🙂

What I will say -have said elsewhere already- is that publication will happen before I head off on my first RL naturist holiday of the year, and I want to publish a couple of weeks in advance of that, take a little break from posting (to pack, and refresh the writing battery) and then pick up on posting from my holiday, continuing the theme of last year’s ‘what I saw’ week long series of posts.

In a sense, this post could well fit into SLN9, as it’s a little photo-essay of ‘what I’ve previously seen, and what I’ll encounter on every naturist holiday I’ll ever take’.

It’s a typical naturist beach scene, from any location around the globe. A group of friends gather for a lazy afternoon under a scorching sun. In Europe, certainly, locals who live close to a naturist beach often embrace a naturist lifestyle without ever calling themselves naturist. ‘I’m not a naturist, I just go naked at the beach’, would be a typical response.

A naked couple set up a spot for the afternoon. Eventually, a friend joins them. The friend may not go fully nude. She (in our photo essay, but just as typically the friend could be male) keeps their swimwear bottoms on. A variety of reasons might explain this. A girl could be having her period, and thus will be wearing bottoms to hide her sanitary wear. She might be modest. She might not be in the mood. The same goes for a male. He’s out jogging, wearing shorts, and merely halts on spying some friends and has no intention of joining them, but stops to chat briefly. There are numerous reasons why not all of a group (and quite big groups of friends can and do gather up at the beach) are naked, and are sporting a variety of swimwear.

A friend may not have properly prepared for the beach. It’s a whim of the moment thing, and so she’ll maybe just strip down to her panties (as in our photo essay).

What’s remarkable is that there’s no sense of embarrassment on display. Fully naked males or females maybe meet people of the opposite sex who are clothed, and who they maybe already know well in a social or work environment. In Spain, in France, or in Greece, I’ve often seen this, with handshakes made as part of a formal kind of introduction between someone nude and someone clothed. Try imagining yourself in this scenario with someone from work, or a family member, and you’ll get some idea of how ‘odd’ the concept is, and yet how those with an easy familiarity of naturism simply accept this as part of the norm of social existence.

The following photos try to depict such a scene. 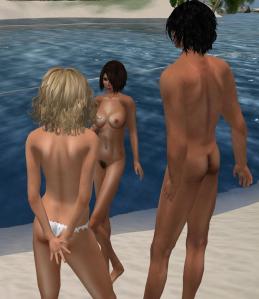 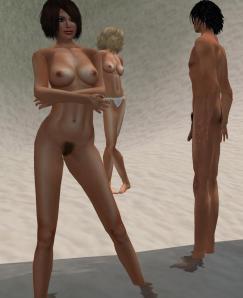 It’s highlighted in the two photos below. 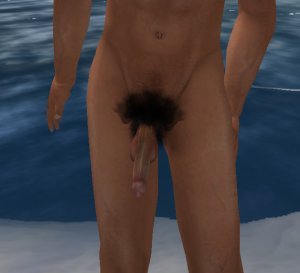 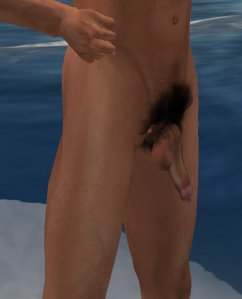 This is, quite possibly, the best looking, most realistic uncircumcised penis I think I’ve seen in SL, and so we’ll be featuring it as a ‘naturist accessory’ in a subsequent post.

I’m not going to put that post on the main page, incidentally, but put it on the ‘naturist accessories’ page, where it won’t ‘flag up’ as a photo on our home page. Click through to the ‘accessories’ page (scroll to the bottom of the page) if you wish to read a report on it (warning: it will include photos of the penis in more than a flaccid state). If you’re male, European and uncircumcised, and wish your avatar to reflect ‘the real you’, then it’s quite possibly a purchase you will want to make).