Popping into SL this afternoon I saw Ella’s post about the Skinny Dippin’ Pond, so headed on over there to see for myself.

It was my pleasure and delight to find that its owner, Nick, was tanning himself at the time, so I took the opportunity to grab a few words with him and knock off quite a number of reels of film! 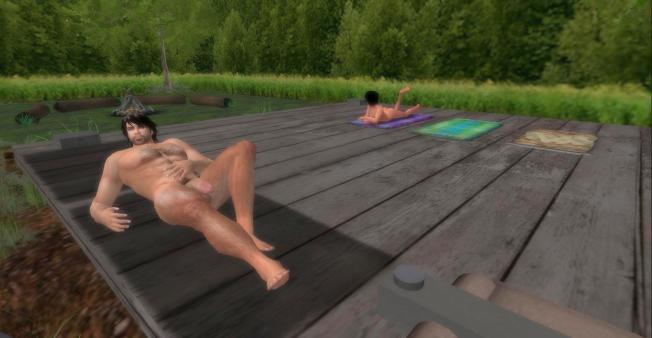 Nick looks relaxed while Pookes tops up her tan

From his profile, it’s clear that Nick is one of ‘the good guys’, a dedicated naturist and someone who holds true to the same family-orientated naturist values that we hold at SLN. And conversation with him simply reinforces this idea.

The sim is small, but no less interesting for that, precisely because –as Ella pointed out in her post– it’s a simple idea done fantastically well.

How many of us began our naturist lives in a skinny dipping environment? How many of us stole off, as a group of teenagers, to collectively strip off by a lake, a river or stream, maybe after dark, and try to steal glances of our friends’ ‘bits’ in the gloom? 🙂

It’s almost a teenage rite of passage. And that is part of what Nick’s trying to achieve here, with users being able to plug into their own memory banks of teenage (or older) skinny dipping experiences. 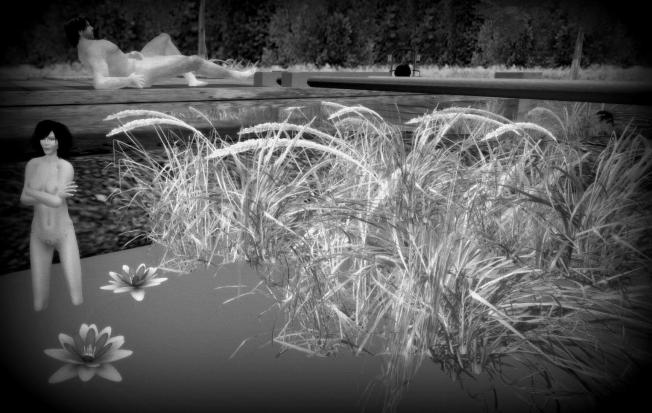 Pookes makes her way through the reed beds while Nick warns ‘careful, it’s deep out there’. He was right!

I must have been about 15 or 16 the first time I indulged, and it was that period of life where we’re moving away from being under our parents’ wings all the time, discovering ourselves. A group of us had shared a couple of bottles of cider, quite enough to get us tiddly…probably about four mouthfuls each! 🙂 bought for us by someone’s elder brother. I can’t remember which friend it was. And then someone suggested a skinny dip. So we trooped off to the river, got collectively naked in separate groups, segregated by sex, and made our way out from the overhanging branches of riverbank trees to swim and giggle a lot without actually seeing much of the guys involved!

What I do remember is the wonderful sense of swimming without a costume, and a feeling that grips me until today. In fact, I think I spent all of the weekend thinking about that experience, that feeling, and wanting to replicate it immediately. I did replicate it a few weeks later that summer, when most of our friends seemed to be off on holiday and there was only myself and one of the guys who was part of our group left at home. He’d been there that evening, and we sat and talked on some wall somewhere about it and decided we’d do it again. No cider this time, and a much more heart-palpitating moment as we were actually stripping off in each other’s presence. I didn’t fancy him, didn’t even think he was terrifically good looking, but he had what you would call a ‘great personality’. Everyone liked him, guys and girls alike, without any of the girls thinking they’d want to go out with him.

Anyway…he was the first guy I ever actually saw naked, and the naked swimming was divine! Those two nights over the course of a summer, long ago, set me on course to becoming a naturist. 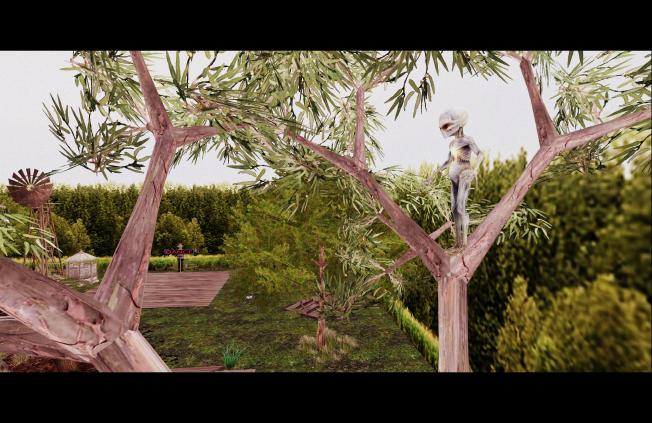 Nick has placed an alien in the trees, evoking the movie ‘Signs’, a wry little folly that reminds him of his farming roots, also reflected in the items scattered around the sim.

So when Nick says the Skinny Dippin’ Pond is meant to evoke memories, I guess that’s the sort of thing he had in mind. I certainly hadn’t thought about those incidents for many years.

Look out for the alien Nick has placed in a tree! It’s a lovely little touch, a ‘folly’ that he says reminds him of the Mel Gibson film ‘crop circles’, and farming folk’s fear of…something…spiders, rodents, aliens making crop circles! What a wonderful idea! Elements of one’s past piled into a sim, to perfectly summon up the builder’s personality!

Nick…angler, naturist, farm-raised boy, sci-fi movie watcher…and all nuanced beautifully into his Pond. We even have a tractor, a water tower and (quite possibly, I didn’t ask and am not sure) some sort of agricultural lawnmover in John Deere colours. Must ask the next time I see him!

Nick says that he enjoys the angling element of SL too, and his next project is to introduce catfish to the pond, so it’s obvious that his intention is to undertake a slow evolution of the Pond. We like that; in a fast-changing SL we like the familiar and comfortable, but with slow, subtle changes to a sim that retain users’ interest.

If it’s simplicity you want, and a chance to soak up SL’s ambience in a quiet, reflective way, unhurried by the glitz of SL’s shopping malls, then this place (is a ‘skinny dipping’ build almost a first for SL in a proper skinny dipping context?) is for you.

I will be back, frequently, to see how Nick develops it and simply to sit, chat and socialise with other users. And that’s where SL is at its best, its most effective. Removed from the need to purchase endlessly and simply enjoy it for what it is without any commercial interest. I’ve reminded Nick that we’re always keen to hear of people’s news, updates, developments on any naturist-related sim, and to keep us informed. That goes for anyone out there who is running a naturist-related sim. SLN works best to everyone’s benefit if you keep us informed of your evolving sims.