We walked back along the beach from our evening meal at a nearby restaurant. The sun had almost gone, but the Spanish like to squeeze the last out of the sun’s rays each day, and you’ll often see a few hardy souls in the rapidly descending night still enjoying the last of the beach.

So it was tonight. A naked family, Mum, Dad, and two daughters in the sea. There was also an older man, who hadn’t gone into the water, and I’m guessing he was Grandpa.

Last year, it seemed to me that shaving, for women, was resolutely ‘out’, but it seems this time around that it’s ‘in’.

Older and younger women alike, the razor has been out in force, and natural looking women are thin on the ground. But as she emerged from the sea and tugged a tank top on, ‘Mum’ turned and demonstrated that the razor is not a part of her bathroom routine.

I can’t, for several reasons, pose a family, so I searched through my wardrobe to replicate what I saw. The beach Mum’s tank top was yellow, but other than that, this is close to the scene I saw as Mum walked to the water’s edge, telling her daughters it was time to come out of the water. 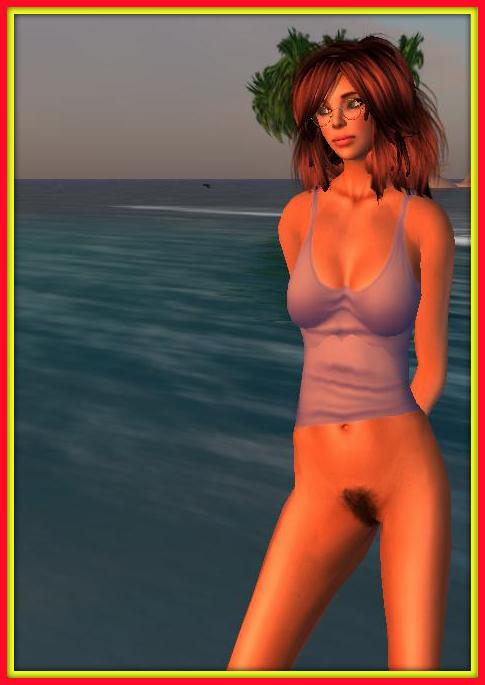 Thankfully, there isn’t much evidence of naturist ‘swingers’ around the globe, as the two things are largely mutually exclusive.

Of course, that’s not to say that no such places exist, Cap D’Agde (France) springs to mind, maybe Hedonism in the Carribean, but I suspect that almost without exception it’s ‘swingers’ using naturism to legitimise their presence.

Can you imagine if someone tried to start a ‘swingers resort’? There would be some opposition. What has happened is that ‘swingers’ have latched onto genuine naturism for their own purposes. It wouldn’t be my thing, and I’m resentful of naturism being associated with such things, but I have to acknowledge that they do exist.

I received a group notice earlier today announcing a new location ‘Amigos Swingers’ had opened up. Hispanic by language, I popped over there to check it out, and there are certainly a copious amount of sex pose balls around. I didn’t look around in depth, as it really falls outside our remit for ‘genuine’ naturism, but I thought you might like the link anyway.

I went down to the beach earlier, and followed a middle-aged couple from their apartment all the way to the sea. The photo isn’t quite accurate, in that they were both wearing sun hats and carrying beach umbrellas and bags for what looks like it was going to be a day on the playa.

The woman wore bikini briefs all the way to the beach, but shortly after setting up ‘camp’ for the day she stripped them off. Sometimes, it seems, naturists, particularly women, do like to cover up a little on the trip to and from the beach, and will don a pair of bikini briefs or a sarong.

I do this myself, sometimes. It’s as though we do feel the need for a little cover-up on the route to the beach. Thereafter, of course, we’re quite happy getting naked.