What’s a nakation, I may well hear you ask.

It’s a conflation of the words ‘naked’ and ‘vacation’ -a naked vacation becoming a ‘nakation’. More in use in north America than in Europe (I’ve never heard the word in the context of European naturism) but we like it. Would a European equivalent possibly be a ‘fkkcation‘? (from fkk…freikoerperkultur, free body culture in German, with ‘fkk’ beaches being signposted far and wide across Europe and beyond Germany and Austria’s borders. You’ll find ‘nakation’ defined at the AANR website.

How far can we push it, in the context of SL? 🙂

The best I can come up with, although not uniquely naturist, would be slolidays. 😦 No, not good, is it?

On Friday, I’m off on my own ‘nakation’. I can absolutely guarantee there won’t be any ‘postcards’, because we’re (my significant other and myself) camping in France, and we aren’t taking computers, just our ipods and phones. And I can guarantee that my phone will be switched off for the three weeks we’re away. 🙂

As a result, no posts from me over that period (unless Ella publishes a couple I’ve already submitted), but I thought it might be nice to leave you with a few ‘flag coloured’ photos, as Ella does with the Spanish flag in her ‘postcards’.

Hopefully, this is a taste of us in France for the next three weeks, as reimagined for SL. 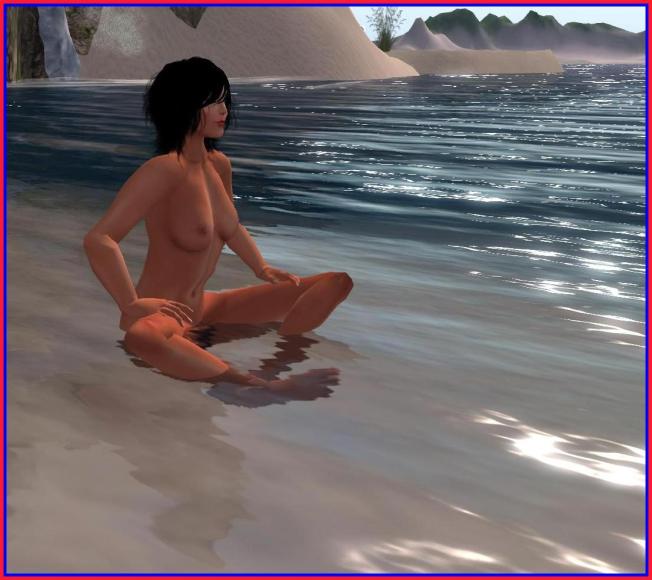 Before you ask…that’s not my significant other in the second pic, just one of my SL friends who agreed to pose with me. 🙂