Hi! Back from my holidays, refreshed and ready to go with another year’s hot bloggin’ on SLN! 🙂

Topless Tuesdays….hmmm…not my idea, not our idea, but the idea of another SL blogger, Uccello Poultry, who runs the Poultry Report blog.

Better still, Uccello isn’t afraid of a bit of skin showing (at least on Tuesdays), as the concept has it’s own Topless Tuesdays flickr page.

We also approve of the general mood and feel of Uccello’s blog, the memes, the writing, the photography, everything!!!! So much so, in fact, it has become a ‘must see’ page each time I’m in the SL mood.

I like blogs like this, with their exploration of different elements of SL, videos and so on, and I feel inspired by it, as it has provided food for thought and probably a re-evaluation on how I run a little bit of my own SL.

France was fantastic, by the way. Three weeks of endless naturist sunshine at a campsite called La Jenny, without the interruption of (much) technology. No computers, no phone signal in some parts of it. Yeah, yeah, I know! Before we went I may have mentioned that we’d maybe tour around some naturist campsites. The reality is we got out of the car, pitched our tent, looked at each other and said ‘we ain’t moving from here!’

OK…back to Topless Tuesdays. I’m not about to re-print other people’s work, but the images in the flickr group are superb, so go visit! I’ve never used flickr as a contributor for anything, so I’m not sure how it all works, other than image searches, sometimes for this blog, link me through to it. So rather than reproduce work by others, I decided I’d  do my own ‘Topless Tuesday’ (even though it’s now Wednesday) and bump up a few images captured at ‘The Trace’ sim, which Harry has used before. 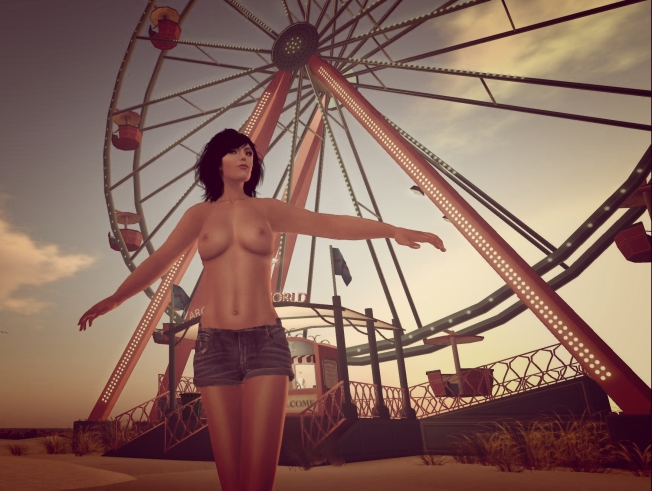 I’m wearing the shorts for that ‘nude beach outfit’ Ella mentioned the other day, and posing furiously in front of a massive ferris wheel. I also took a ride on it, and that’s a new SL experience for me. It was lovely to just sit and watch a very photogenic sim float by.

I also ended up with a little photo-essay on how I a) started grafitti taggin’ my name on the side of the…heh, heh, heh…police station at the Trace sim, and b) ended up in jail! I think I’ll post that little story tomorrow 🙂

What I would do is suggest to you that you visit…wherever you want!!!!!…and take some photos that can be added to the Topless Tuesdays flickr page. (Please don’t send them to us, we didn’t think of the idea, and we aren’t stealing anyone’s thunder).

And just popping back through our own pages, I notice next Sunday is ‘Go Topless’ day. So why not kill two birds with one stone? Go topless on Sunday, in support of that great cause, and then get the photos up on the Topless Tuesdays flickr page next Tuesday?

One thought on “Topless Tuesdays”