As the nights drop down, SL activity increases! 🙂 (And that includes us, after the post-summer blues affecting us all!)

There seems to be some sense of new, changed, reconstituted sims popping up, and Equilibrium Nude Beach is another new (to me) naturist location.

I have to say I approached it with some sense of trepidation, due to the lengthy list of sexually orientated tags (including bdsm, I think)attached to it in its description (using the ‘places” menu in search), but -other than a single sex bed I found, isolated on one side of the sim, I didn’t find anything overtly sexual at the sim. On the contrary, it was largely ‘sex free’, and actually had a sense of romanticism around its clubhouse, overlooked by a stage area, with tables set out for dining. Currently, despite the sexual search tags, it looked like it might be a rather delightful place for a romantic dinner.

I tried out their hot tub….under a scorching evening sun, but couldn’t get the water to work. 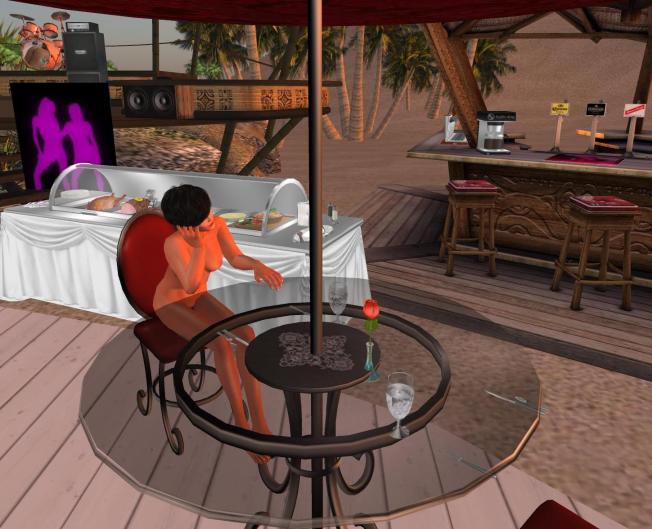 LOL! I need to find a significant SL other to share a romantic dinner with. I love the single red rose on the table at the restaurant area.

The sound was more car-crash in a wreckers’ yard, than anything approximating a rhythm, but I enjoyed hopping onto the drum kit.

The only sexual item I found was this bed, isolated from the rest of the sim, so it would never be ‘in your face’ if you choose to use Equilibrium for ‘pure’ naturist intent.

Abeltoft Nudist Village is new to me, both as a location and, possibly more excitingly, as a concept.

Owned by Jarl Ironfist, it looks as though it’s being run as some sort of game-within-the-SL-game, with a collection of what are smallholding farms where, with the aid of a separate currency (Touch Coins), you can buy the things -food, basically- produced within a kind of co-operative farm. Billing itself, also, as a ‘GS market’, I’ve not (yet) been able to establish what ‘GS farming’ (do I sound so…hmmm….urban? 🙂 ).

I’ve not yet joined the group (L$150) to get into the village and see what it’s all about, as I need to explore what the entire concept of it is first, but it would rather appear to allow renters to run their own farm, grow produce and sell it with the ‘Touch Coins’, all in a naturist setting. I hope I’ve got all this correct, it’s basically guesswork on my part, and I’ll follow up with a second report whenever Jarl, whom I’ve IM’ed, comes back to me.

I also sense some degree of ‘medieval’ farming approach (certainly a pre-Industrial Revolution one), judging by the tools available for sale at the marketplace at the village (which you can visit and enter clothed).

What I will say is that, judging by the rules of the village I read that the approach to naturism are absolutely fantastic, from an SLN naturist point of view. No poseballs, 100% genuine naturist intent.

The only photos I was able to grab, by ‘camming’ is a general overview of the farm collective. As you can see, it has a nice look and feel. It will certainly be somewhere I would re-visit, and even join, once I was clearer on the whole concept of the place.

Once again, this post is that rarest of beasts, an SLN post which doesn’t contain nude photography (I always visit new locations clothed, initially, until its genuine naturist intentions are established).

Perhaps the game-play is the main focus, with naturism merely a secondary issue, but the possibilities of such a different form of gameplay should be apparent to everyone. If it’s possible to create an SL job, i.e. farmer, that isn’t either clothes shop owner or sex-industry related, the SL landscape changes enormously. How exciting would that be? Would it be possible to run a (naturist) newspaper, then, within such a concept and for that village’s community? Would it be possible to extend the breadth of the village’s scope to include non-farming possibilites? 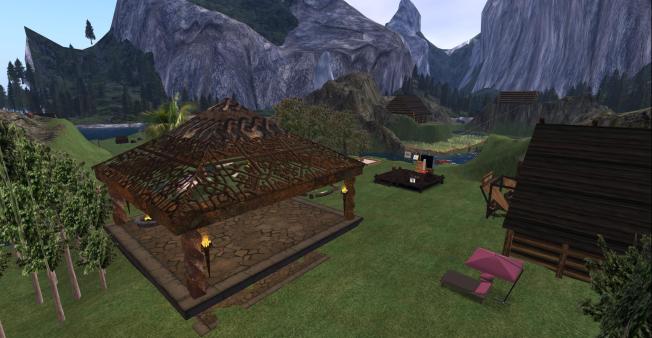