My goodness! I don’t think we’ve ever had such a response, so quickly, in the history of SLN!

It rather looks as though the whole body adornment thing is something that grips your imagination.

I’ve two posts lined up, featuring readers and their own approaches to the ideas.

First up is Jakky, who sent in a photo of herself (which Harry has cropped and framed).

Unfortunately the rest of her portfolio included some photos of a sexual nature, so we can’t use them here. Harry has volunteered to do some post-production on them, and maybe put them up on his site. We aren’t sure about this. What’s your, the reader’s, view on it?

I’ll hold two further contributions, one from an SLN reader and one a contribution from Barbara, back until later tonight or tomorrow.

I’m sure many of you use Emotions hair.

I know I have several of their styles in my inventory.

Well, if you’ve not been there recently, note that their most recent group gift is this lovely pose & hairstyle. Joining the group is L$0. And the hair and pose are also free.

A stunning pose, and excellent hair -as always- to go with it. Evie posed for us, and the results, a beautiful and almost ‘retro’ naturist pose, is reproduced below, and given a patina of ‘age’ thanks to Harry. 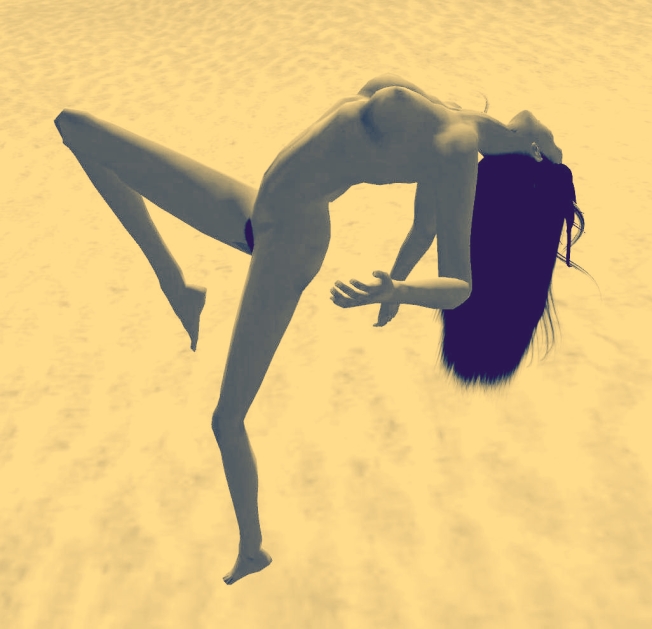 Yes, I think so, as I do see some body piercings, some tattoos and a lot of pubic depilation on males and females during my RL naturist holidays.

They aren’t things (shaving the pubic region, apart) I think we’ve ever really focussed on in the lifetime of SLN, so I thought we’d put that right today.

Meet Jim and Chelsey, who I met earlier and who agreed to pose for SLN. Partnered in SL, both have a RL love for tattoos, piercings and body hair removal.

I asked them to ‘tatt up’ to an extent, for the purposes of demonstrating that using the ‘add’ button, rather than ‘wear’, allows an avatar to add multiple layers, hence the rather heavy and messy tattooing effect. It’s not how Jim and Chelsey regularly live their SLs, but both were agreeable enough to add a few extra layers for the purposes of the camera.

‘I multi layer all the time’, Chelsey told me, ‘but it needs care to produce a ‘wow’ rather than a messy look, but it certainly can be done. Some of the ones we’re wearing today are freebies (from Nikita Freebie and Freebie Dungeon). We’ve probably both had them since we first came into SL’.

Jim goes on, ‘We do like experimenting with the look we can achieve, and we’ll often be logged into SL at the same time, searching the same or different sims for new body adornments.’

I asked Jim about his genital piercing -a Prince Albert cock piercing and an accompanying cock ring. ‘I couldn’t find any in world, but I did get these from the SL Marketplace. They’re probably my favourite SL purchases.’ Enquiring about the evidence of some pubic hair, Jim laughed and explained that ‘the join between a SL body and the genitals sometimes look really harsh. Just to soften that awkward join, I do keep some pubic hair in place, but it’s not something I would have in real life’.

Chelsey, too, wears ‘as many piercings and body jewellery  as possible’. In the photo (above) she’s wearing a nose ring, lip piercings, nipple rings, belly piercing and clit rings. ‘Like Jim, sourcing and buying stuff like this is really the fun thing about our SL together. We love it!

Both wax lyrical about the ‘Envi’ store as ‘our favourite shop for piercings because ‘they’re good and they’re affordable’. L$40 is an expensive purchase from there, they tell me!

I’m not yet ready to put ink onto myself, but I am very taken with some of the piercings (some readers will recall I have experimented in the past with nipple rings, belly piercings and a clit ring). But Jim and Chelsey do, I think you’ll agree, both look fantastic! Where’s that Envi landmark? Ah..here it is! I’ll maybe catch you over there while I indulge myself in a few purchases, maybe some of the ear adornments?

I’m sorry to say that, after much behind the scenes discussions, we’ve pretty much abandoned plans for SLN10 in its current format. The reason for this is that, because it’s a ‘political’ issue, in a manner of speaking, we’ve been sensitive to the needs of non-western cultures. SL is a world largely devoid of politics, and while there are some downsides to this, there are also benefits. 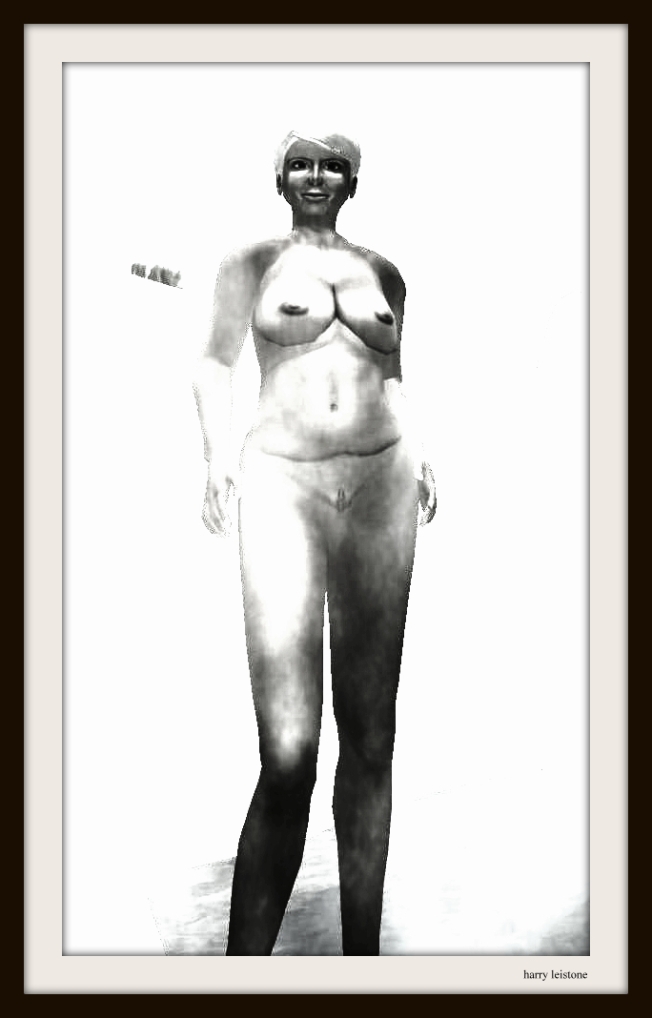 We became bogged down in the ‘political correctness’ of it all, eventually poring over every last word in case someone took offence along racial/national/religious faultlines.

This isn’t, for me, that SL is all about, and if we’re going to spend hours and days arguing over it, it’s not worth it. So SLN10 -in its ‘political’ guise- won’t happen. SLN10 will now be the Christmas issue.

My apologies for that.

Some long term readers will remember a previous attempt to undertake a ‘political’ issue also ended in failure, so it seems sage to now abandon all ideas for this type of publication. I’ve been able to rejig some of the material, and this will appear in the Christmas edition.

In the meantime, here are some new photos (above), grabbed around the grid, featuring happy SL naturists at play.

Note that some of them are no presented ‘framed’, with the photographer’s name (Diane or Harry) attached. It’s likely that many of SLN’s future photos will appear in this format. We’ve also discussed either a marketplace presence, or a ‘gallery’ in world, where you can ‘buy’ the framed works to hang on the walls of your own home. Current thinking is that most would be ‘for sale’ at L$0. What do you think?

I will also be ushering in 2014 with a few tweaks to the magazine’s format, just to keep it fresh. Minor stuff, mostly, but all part of the ‘rebirth’ process I find that I undertake in SL at year’s end every year.

That’s the time when many of us, I think, also ‘tweak’ our avatars, our homes, hairstyles, skin….whatever!…and face a new year with a new look and expectations for the SL year ahead of us.