I’ve written, previously, about my own nude debut taking place at the Cap D’Agde naturist city, in France, more years ago now than I care to remember. 🙂

Back then, almost twenty(!) years ago, it didn’t have the reputation it has now. Then, it was simply a ‘naturist city’. You could rise in the morning, use shops, cafes, walk, drive, cycle, swim, eat and do anything else you wanted to do as part of your ‘everyday’ life, nude.

Now, whether some wish to regard it as still having ‘genuine’ naturist credentials, in parts, the public perception of it in the media is as a haven for exhibitionists, swingers, of breast implants, cock rings, tattoos, piercings and public sex.

I’ve not been back since my one and only time there, and as it has descended into some sort of ‘swingers paradise’, with displays of public sex occurring on the beach, whether that offers a realistic view of the overall vibe of the place or not, I won’t be back in the near future. If people wish to indulge in displays of public sex or whatever else, that’s their prerogative, but it isn’t for me, or my family. We prefer a quieter, more wholesome variation of naturism.

One of our readers, who wishes to contribute under the name of ‘Venus‘, after the Roman goddess, visited Cap D’Agde during the summer months, and will, in the coming weeks, beginning with a ‘column’ in SLN10, report on what she and her husband found during their vacation.

A naturist poses at the Cap D’Agde harbour

Before we begin that series, it’s maybe worth me saying that, online, there appears to be huge numbers of photographs taken around the harbour, by the centre’s swimming pools, on its beaches and adjacent dunes, the latter seemingly being the prime locations for displays of public sex. There are also huge numbers of photos of guests getting dressed up for the evening , not, by any means abnormal, it seems to be a naturist trope, even in wholesome naturist locations, with the slight difference being that ‘getting dressed up in the evening’, in Agde, often means all manner or revealing and fetish styled outfits.

Agde was my first experience of naturism, and the first photograph of me in my birthday suit 🙂 was taken, by my cousin, she & I were working there for a summer season, at its harbour.

I’m reminded that the Blue Lagoon sim which is part of the Eden Naturopolis estate, and indeed Eden’s main harbour, have a little sense of Agde’s marina about them, but I suppose that could be said of many of SL’s harbours and marinas.

So I popped down into Blue Lagoon to take a couple of ‘selfies‘, in a sense, that, personally, contain a little of a feeling of nostalgia for that (wholesome) summer, and even by looking at the SL versions of the photos, give me a little sense of awareness and excitement of the summer I made my nude debut in public. 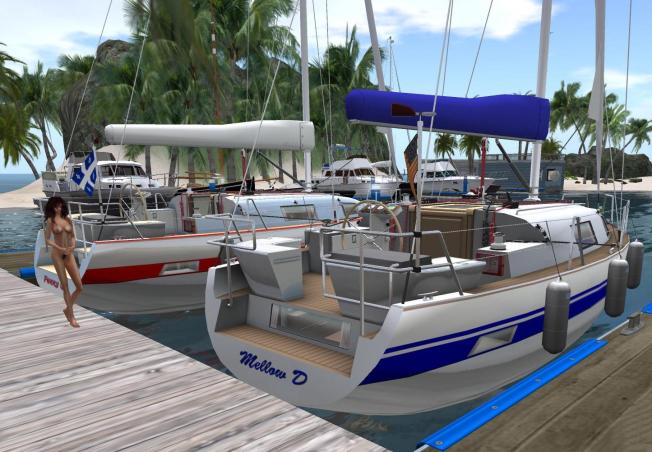 I shall give you a word of warning now, and shall also provide a caveat emptor warning in SLN10, that this is not normal SLN styled material, and I’m still unsure about how I should approach reports filed by ‘Venus’. We will be publishing, but there remains the distinct possibility, so ‘racy’ is it, that we shall externalise the reports to a different site. Stay tuned while we internalise what has been written, which goes way, way beyond what fits into our definition of naturism and is a topic of ongoing debate in the SLN office.

nb: there is no intent to suggest or suggest or infer that ‘Blue Lagoon’ has Cap D’Agde ‘values’. ‘Blue Lagoon’ has no poseballs, and very much fits with SLN’s definition of wholesome naturism. ‘Blue Lagoon’ is a wonderful addition to the ‘Eden Naturopolis’ family, and subscribes 100% to what I, SLN and Eden themselves would regard as proper naturist values. You will not find ANY form of sordid, exhibitionist ‘swinger’ type values at Blue Lagoon. If this is what you seek in SL, please seek it elsewhere. I wish to make it absolutely clear that ‘Blue Lagoon’ only features in a Cap D’Agde referencing posting because its marina reminded me of a RL location from almost two decades ago, at a time when Agde’s values were markedly different to those they embrace now. Thanks.