No, Carhenge isn’t some sort of forgotten city from the Phoenicia, an Empire that existed from modern day Spain to Syria in the 1000 years BC (or, if you’re a modernist, BCE).

It was (is?) instead a kind of art installation, thus… 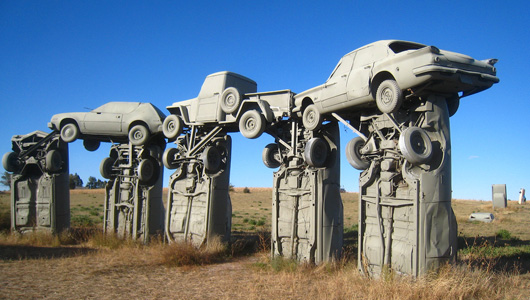 And mention of Phoenicia might also remind one of Astarte, a.k.a. Ishtar, a Mesopotamian goddess associated with fertility and sexuality. The more astute amongst you may notice the similarity between Ishtar and Easter, also a time associated with fertility and sexuality, in a sense. Think of all those hatching chicks, all those frolicing bunny rabbits.

That’s right. The Christians jammed their Easter festival onto themes associated with Ishtar (it made the process of converting others easier…a process also apparent in hijacking the pagan ‘Yule’ festival at Christmas). Note: others disagree with this claim, although my feet are firmly in the ‘Christian hijack’ camp.

Stonehenge has also been theorised as being a huge fertility symbol, intended to reflect a vagina.

With me so far as I try to draw various strands of thought together? 🙂

Anyway, I asked Diana to attempt to re-create a sort of ‘Carhenge’ in SL, so I’ll hand over to her… 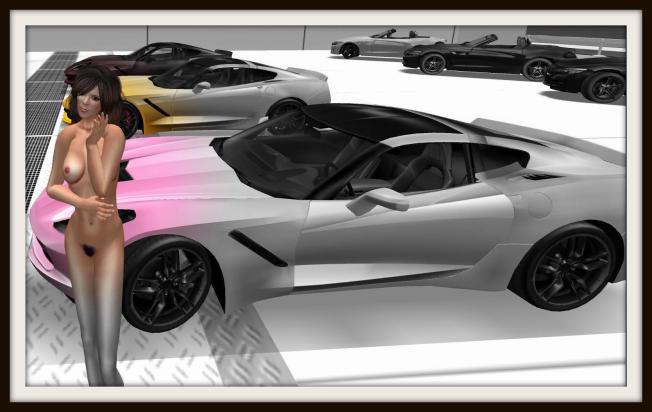 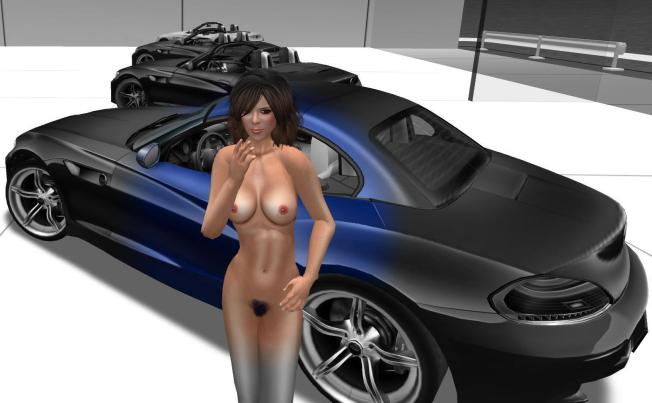 The idea was to attempt some sort of ‘Carhenge’ sculpture. Sadly, the quality of the vehicles, boxy things from the dawn of SL, I’d guess -which shows you just how far we’ve come in ten SL years- means I wasn’t entirely satisfied with the original photos. I posted the original photos and then pulled the post a couple of moments later (in case anyone happened to see this post previously and then were confused as to its disappearance.

So the following photos were then simply taken at a car showroom in SL, and intended not to be so much a reproduction of Carhenge as originally envisioned. Instead, I tried to capture the essence of something often regarded as unique to ourselves as reduced to simply an identikit piece of machinery, largely ‘greyed out’ as in the case of the the original Carhenge, to give a sense of monochromatic sameness. Henry T Ford once said you could have a car in any colour you wanted as long as it was black, remember. I’ve had to rethink the ‘art’ of the photography and what I wanted to achieve with it. I’m still not entirely happy with the photos (I couldn’t successfully mask out all of the colour) but they’re much better than ‘take 1’. As we’re a naturist SL blog, they needed a little naturism in them, and in the absence of other models around, I had to stand in myself as I tried to replicate a familiar ‘auto magazine’ meme, that of a scantily clad female (in my case, unclad) draped across the bonnet of a car in order to associate an automobile and its exceptional power and status with sexuality. So 1970s! Do auto magazines still do this? We’ve maybe thrown together a lot of vaguely linked concepts to ccome up with this post, and maybe it hangs together. You decide. What I have learned from the experiment is that -even from a 21st century female perspective which makes me disagree with the use of female  models to sell cars and fetishise them from a sexual point of view, the two do somehow work together as an image and concept, while the soft-feminist in me (i.e. I’m a 21st century woman) still disagrees. Nevertheless, Harry and I have decided it’s a theme we shall attempt to do again at some point.