Textile ‘creep’, undertaken by textile-clad creeps, is beginning to be, I feel, a bit of a problem with some of the sims, and it seems that some sort of hardened-up attitude may actually be necessary.

You can read a very erudite comment from All-Nudist here.

In other news, my lack of posts over the weekend, despite promising to get some of the backlog cleared, has been down to a domestic situation. No, he hasn’t left me, lol!

Mr Keng learned a few days ago that he’s been seconded onto a three month project which will involve working from home (which is a plus) but working to US and Japanese time zones (which is a minus because he’ll be video-conferencing long into the night). And because there’s such a tight schedule on it, it will mean him missing our first naturist holiday of the year, in June. As my mother-in-Keng would have already been moving in here to look after the children, we’ve decided to proceed with that plan, and I’ll be going on holiday as previously booked.

However, how much fun might it be on my own? Not a lot. So the weekend has been spent re-organising that.

My RL friend will now be accompanying me to Spain in June. She’s not a naturist but she’s great fun and it will make the week a lot of laughs (that’s not to suggest there’s no laughs to be had with Mr.Keng!). So the weekend was spent organising the tickets accordingly.

And you should know me by now! Never one to miss SLN potential, am I? 🙂 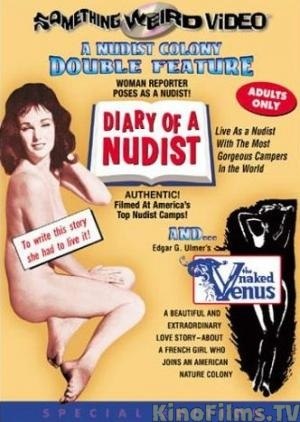 As a result, I’ve talked her into writing for SLN (she knows I write this blog and is always curious if, until now, about sim life). With the sleeve from 1961 nudesploitation move Diary of a Nudist in mind (you can also see the movie here), I’ve asked her -as a favour to me- if she can adopt the same approach as the reporter in the movie, and provide her thoughts, running in parallel with my own ‘Postcards from Spain’ series, on the naturist lifestyle. As I say, she isn’t naturist and has never expressed any desire to be one, but I’m hoping she’ll provide some posts in tandem with me from the perspective of someone exposed to the naturist lifestyle for the first time.

I think the thoughts and insights of a ‘textile’ might be interesting. I’ll introduce you to her closer to the time. In the meantime, I’ll be re-jigging the ‘Consuela’ alt I developed last year during my previous ‘Postcards’, as we followed a will-she-wont-she lady who was living in the apartment opposite ours. I hope it all works out. My friends in Spain have been reporting that they’ve lost their UK TV signals, due to the signal being sent via a different satellite, with the downside being that they’ve all hooked their TVs to their computers and it’s killing the internet in Spain stone-dead (and it wasn’t terrific to begin with, I have to say). I hope it’ll all work out for the best anyway.

‘Consuela’ will maybe be re-tooled to replicate my RL friend, so we can maybe take a few photos as the week develops. We shall see. I now need to persuade her to install a viewer on her computer so we can take some side-by-side shots.

Anyway, I’ve a lighter work week this week, followed by a slew of days off, so SLN will be publishing through the week and into the next with regularity. Stay tuned!