A familiar word in the UK, is it one that has travelled abroad? (Or did it even originate in the UK?)

This week, a funfair in Essex, a county on England’s east coast, decided to ban topless males from its grounds.

Not, strictly speaking, because overweight males put breasts larger than a thin woman on display, a display that offends some. I’m not bothered. An overweight male is likely to display such a physique, and I would suggest that, while overeating and over drinking may have made a male out of condition, and may thus be regarded as unhealthy, I also apply the naturist mantra that being comfortable in your own skin is the main issue. We’ve become obsessed with, and imprisoned by, the concept of industries…fashion, health, beauty…creating what is, for most, an unachievable yardstick to which we measure ourselves. Thus has grown a culture of fake tan, fake hair, fake nails, fake boobs….fake everything! And all because these industries must get their pound of flesh if we happen to be carrying the same in excess weight.

So men with their shirts off aren’t even something that should be making news. But they do.

The odd thing is that we, society, worships and reveres large female breasts. Yes, ‘we’…males and females alike. Men are drawn to big boobs, and there’s practically an SL sub-culture going on with the mega-boobs industry. And women, if they don’t have them, generally want them, with boob jobs being possibly one of the top earning areas of cosmetic surgery.

In RL, I’m not overly well blessed in the boob department, but I’d never contemplate the surgeon’s knife to enhance myself. 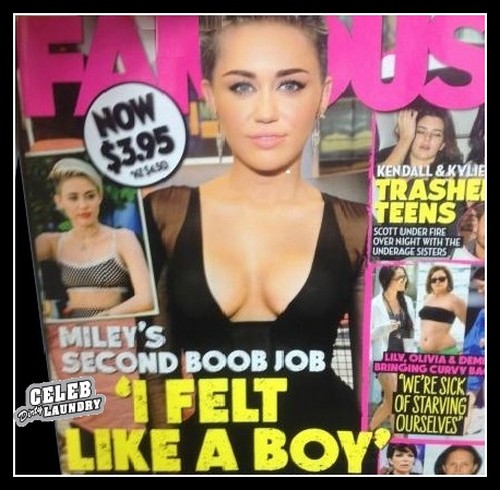 I also feel there’s a sense of tyranny involved in headlines like that above, Miley Cyrus ‘feeling like a boy’ beforehand, the clear inference being she’s not all woman with a decent pair of boobs. And the reader should feel the same way….is essentially the sub-text. I don’t buy it.

In a world where we’re all shoe-horned into convenient boxes, pigeon-holed, demographicised, categorised and exposed to a need to make us ‘fit’, it’s rather nice that naturism allows us -naturists- to accept and acknowledge that there’s no perfect body, that we come in all shapes and sizes. Big boobs, small boobs, fat, thin and all sizes in between, large penises, small penises. After a while the tyranny of the fashion industry floats away and we begin to judge one another on the basis of their personality, not what size our boobs or penises are.

It’s something naturists have said for decades, to the point where it was -and maybe still is- cringing cliche. It also happens to be true.

So, fellas of Essex (and elsewhere), if you want to take that T-shirt off on a hot day, be my guest, and try to remember that it’s not illegal and the UK -for all of its surveillance culture and erosion of freedoms, still a reasonably free country. The one thing I would say in support of the theme park, and quite obviously linked to the old naturist etiquette of carrying and sitting on a towel (no one wants to sit on your sweat or sun tan oil) please put the shirts back on if you’re using the rides, or chairs in restaurants. And get your other half to apply sun block if you do strip off.

While not being a practicing Christian of any denomination, I’ve been brought up in a nominally Christian country, so I suppose that’s what is familiar to me. I work on the basis that I’m happy for you to practice your faith, free from any restrictions, whatever that faith may be….Christian, Jewish, Muslim, Buddhist…whatever…but equally you’re not free to shove your ideals down my throat. And you shouldn’t be free to legislate where your beliefs inform the framework wherein you write laws. Therein lies bad government, particularly in a multi-cultural world.

I’m not going to expand on this much further, other than to say that I’m free to make my own choices, and I really don’t warm to the idea of countries being led by religious leaders, or this constant harping on about ‘peace and love and tolerance’  while simultaneously starting wars for oil, or stoning people to death. Rank hypocrisy, on both counts, but I don’t really expect anything different from those wearing their faith on their sleeve or running a nation based on their interpretations of religious works written centuries ago.

I suppose Easter is the big Christian festival. After all, it’s the whole basis of Christianity, the ‘Resurrection’ message.

And that led me to thinking about religion’s relationship with naturism.

I know there are Christian Naturist groups…for a while there was even a Christian Naturist church (the Grace Church, as I recall) within the environs of the Eden Naturist Estate! I mean, Eden’s name itself derives from The Garden of Eden, wherein Adam and Eve, the first man and woman, are recorded in The Bible (in Genesis, the first book of the Bible) as both being naked, but knowing no shame.

I guess that’s a question for Christian scholars to wrestle with, and I won’t be drawn into the debate. The simple fact of the matter is that some Christians readily reconcile nudity with their faith, possibly despite a need for their church leaders to challenge their decision (look how some people feel the need to impose their will on others!).

I’ve looked at other religious texts in relation to the Garden of Eden story and note that an interpretation of Jewish scriptures suggest history will eventually close the circle on itself and we will return to a Garden of Eden state. Does this mean naked? Does this mean directly knowing God? In a way, I’d argue naturist philosophy is already ahead of the game here, in that for many who commune with nature take time to acknowledge simpler pleasures…nudity bringing them closer to nature and, perhaps, knowing God.

A Christian Naturist does not have any problem in reconciling his nudity with his faith.

A trope in mediaeval writing referred to the ‘locus amoenus‘, a Latin phrase translatable as ‘pleasant place’, that referred to a location of comfort and safety…an ‘Eden’ of sorts.

While man has been able to communicate in written form, then, it appears the Garden of Eden concept is very firmly held.

Islam, of course, has a more complicated relationship with nudity, as we’ll be aware of due to recent controversies regarding Alia Al-Mahdy, whose actions we reported and supported in one of the earliest ever SLN posts. The continuing popularity of that post, I think, shows that there is a complex relationship with the body within Islam. I’m not going to even attempt to criticise that, on the basis that I don’t know enough about Islam’s thinking on the topic to even attempt to make anything approaching an opinion. What I will say is that I know enough about Islam’s attitudes, shared almost exactly with some sections of Christianity, regarding women to dismiss both of them as a patriarchal society continuing to determine that we -women- should have our rights enshrined by men, our freedoms determined by men, our attitudes shaped by men. Don’t you think, Priests, Pastor, Prelates, Popes and Imams, that it’s time to update your archaic views?