…wrote one of our readers, so we asked her to recall a holiday abroad with her family when she was 18 and an eye-opening experience on the first couple of days of that vacation.

‘Foreign holidays were a rarity, my parents preferred to own and keep a caravan on the English east coast. But 20-odd years ago, as I turned 18, they decided that, with me going off to university, and my sister about to graduate and move to another part of the country, we’d have one last family holiday.

So we made it out to Spain, and down to the beach the first morning. My mother and sister bikini clad, me also in bikini and sarong. We have a holiday snap that my father took which is fairly similar to the photo below.

It happened to be a nude beach! We didn’t know that when we booked a nearby hotel, and it was a bit of an eye-opener to say the least.

But what happened next was a bit more of an eye-opener, when my mother -my mother!!!!- whom I’d never so much as seen in a bikini or even her underwear before- decided that the bikini top should go!

Emboldened, my sister (we shared a bedroom, we’d seen each other naked before) followed suit.

While the shock of my mother baring her breasts was sinking in, and a parade of full nudity passed before our eyes hour after hour, I was even less prepared for the moment when my mother and sister began giggling girlishly, and conspired to agree that they would go fully nude. It wasn’t such a shock that my sister would do such a thing, but my mother?????

Worse! My mother went first. My sister took a little longer to pluck up the courage, but by the end of the first day both of them were running around the beach, sunbathing and swimming, fully nude. In the meantime, I’d lost the sarong, at least! 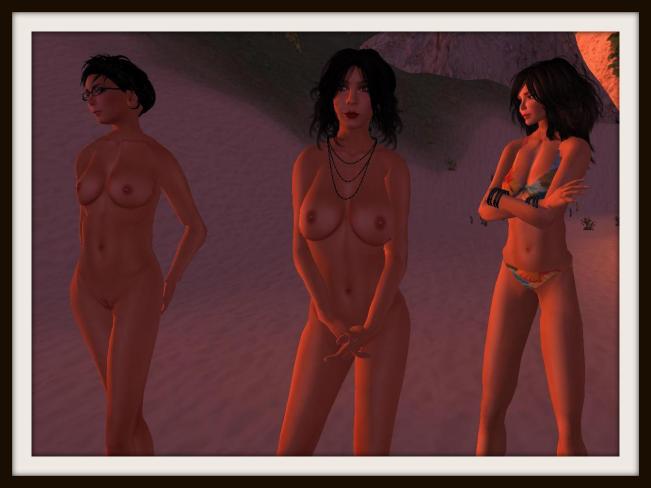 By day two, they both began the day fully nude and…groan…my father had decided he, too, would lose his swimming trunks. Where to look!

While SLN have contrived to replicate many of my memories in virtual naturist form, I should add that no photos of my sister and I exist, although my mother and father did take photos of each other nude, and even got my sister to take one cheeky snap of them both nude on the beach.

By the middle of day two, I admit it, I’d also lost my bikini top, on the basis that I felt overwhelmed by the fact that I seemed to be the only one on the beach in a full bikini. People were, perhaps, looking. I simply blended in by having the top disappear into my beach bag.

And I do recall the moment when, breasts bare for the first time (certainly the first hour), I decided I needed a dip, and walked to the water’s edge, only to come face to face with the fully nude form of the son of other holiday makers who were in our hotel.  I’d identified him as a bit of a cutie….’fanciable’, if you will. And there he was, stark naked and smiling at me!

I didn’t know where to look. Avert my eyes from his manhood? Cover my own nipples? What??? Life does not prepare you for moments like this.

We chatted for a while…and certainly met up in the evening, dressed! back at the hotel.

After that we spent some time together on the beach, in the hotel and…well….it resulted in a bit of a chaste kiss on the last evening of his holiday. I don’t know…did I want more? Did he want more? We’ll never know. It never happened anyway. And he never actually saw me fully nude the entire holiday.

Since then, I’ve never gone fully nude in real life, although topless is pretty much standard beach dress code. I’ve never since seen my mother, father or sister nude. Indeed, my parents are now old-age pensioners. Still with life in them, but older, and settling comfortably into old age.

I often wonder if they think about that holiday, that one-off embracing of the moment, of going nude in public. And I wonder if, when they’re gone, my sister and I are going to do house-clearing and discover some yellowing, nude holiday snaps of a younger and fully alive them.

And I wonder if I missed something by not going naked that holiday. Spiritually, physically and…who knows?…maybe even sexually.

Twenty plus years later I’m now a mother myself, and an SL player. And yeah, I’ve finally, after all these years, been known to embrace nudity even if it’s only in SL.’

My other half -the RL Mr. Whelan- (to borrow a turn of phrase Ella would use) is something of a rock music buff, and we (he, basically) has shelves stacked deep, wall to ceiling, with vinyl LPs, singles, Eps, 10″ collectable items, 78rpm discs, CDs and all manner of turntables and amplifiers attached. And when he comes home he’ll choose something to meet his mood and the scratchy records go on. Last night it was a general ‘David Bowie and associates’ mood, and that began with us listening to ‘Heroes’, after which a contemporaneous release, Iggy Pop‘s ‘The Idiot’, produced by Bowie, got a spin. After that, we headed down a weird, eclectic route. A Mott the Hoople album. A Lulu single. Don’t worry, American friends, if you don’t recognise the names. I’m not wholly familiar with them either, and I grew up in the era they were famous!

Anyway, during our listening and me perusing the sleeves (oh how LP artwork is vastly superior to the CD variety) it transpired Iggy liked, on occasion and to use a colourful turn of phrase, to ‘rock out with his cock out’ (see photo above).

So…how about a conflation?

A nude male model sporting implausible hand gestures? Yes, I asked the photography team to come up with something, and Diane gave me the following shot. 🙂