Hi! I’ve opened a small gallery at Nude Haven, which will hopefully fill up with downloadable images over the weekend. I’ve been planning to open a gallery for some time now, and the opportunity to do it on an urban, naturist sim was one that was too good to pass up. 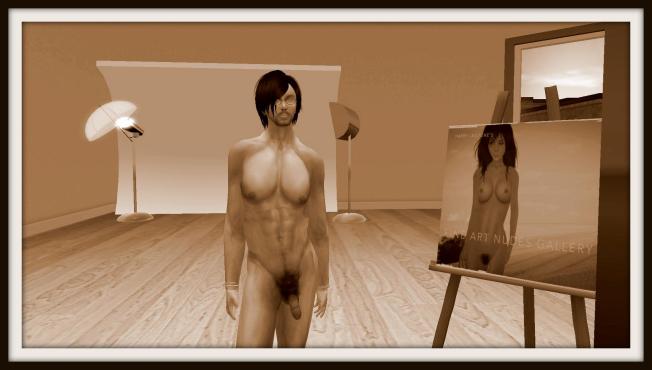 I hope to have the permissions set so that visitors can ‘buy’ (i.e. L$0) anything they like. Items that can be bought will be on the walls, with other photographs on easels around the gallery. Essentially, if it’s on an easel, but you’d like it as something to hang on your apartment wall…ask! 🙂

I’m still working at it, and it’s going to take me most of Sunday to ‘crack’ how to do it all correctly (never having built anything before), but I hope to have it filled up by tomorrow night (at least to my prim limit! 🙂 ).

Please! Stop by! The plan is to run it for a month, and probably rotate the photographs from time to time. Free they may be, but prints are usually done in ‘limited runs’, so once it’s gone, it’s gone! Not even fistfuls of Linden dollars will bring them back once I change them. So please bookmark the gallery and keep checking back.

Thanks for your support.

I’d better be careful how I phrase this, hahahahahaha!

I stopped off at Yoga Poses earlier, and was excited by a poster on their wall, featuring one of their poses called ‘Feeling You’.

And my sense of elation was in regard to the fact that, in the poster, their male model’s penis is displayed. Now, this may not strike you as a cause for celebration, but for me it is an absolute breakthrough in SL shopping. Look…half the world’s population has one…half of SL’s population has one. For those of us writing SLN (or exponents of RL naturism) they’re unremarkable and, well, almost invisible after a time. In RL, I want to hear the brain of a male naturist at work. Engage me with your intelligence and sparkling conversation. In SL, I want the same and am pretty much underwhelmed if you’re sporting an appendage that is less a penis, more a third leg in size. 😦

So well done, and a big thanks from those of us at SLN, for having the bravery to feature it (and properly proportioned, too!). Perhaps now that that particular barrier has been dismantled, we can see more of them in shops (where appropriate, of course) and on blogs. They are a fact of life, and entirely normal. Bloggers and shop owners should not be afraid of this fact and displaying them, where appropriate.