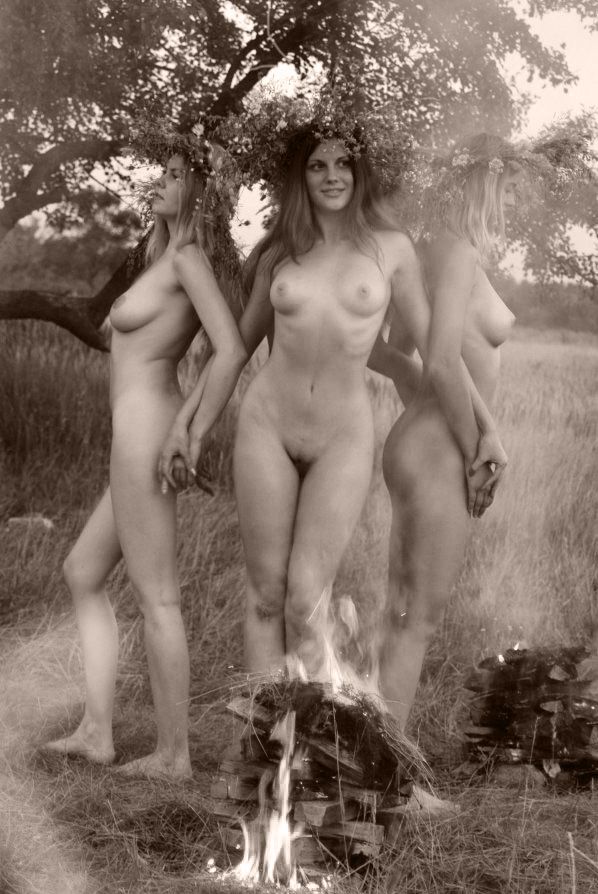 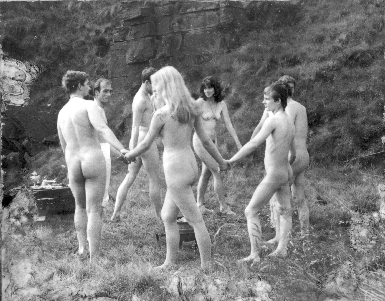 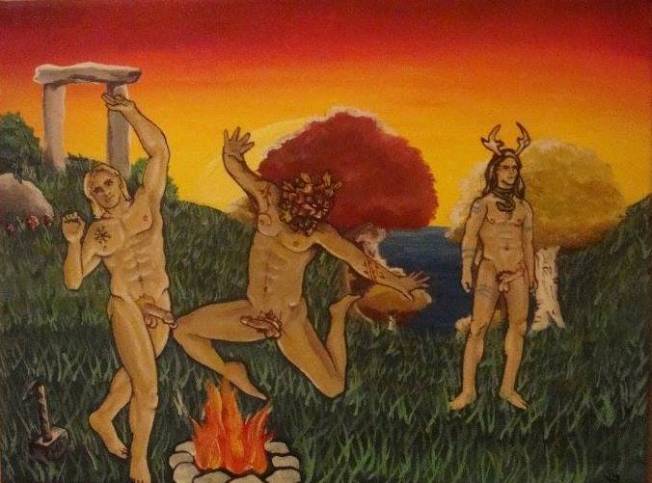 This painting of ‘Mabon’ is strictly speaking an autumnal Pagan ritual, but shows the importance of being ‘sky clad’ and with priapic overtones.

(Edited to add: Priapus, the Greek God of fertility, is often shown with a permanently erect penis. There’s little doubt he has his followers in some SL ‘naturist/nudist’ sims! :-0 : Ella )

I’ve begun with a selection of images depicting ‘sky clad‘, a euphemism in Paganism for ritual nudity. Today’s the Summer Solstice, and it’s a day laden with all manner of symbolism for Pagans. And Ella has already reported that she will be at the festival of St Juan on her forthcoming holiday, a festival that will have some close links, purloined by Christianity, from Paganism. The bonfires, the ritual cleansing (with fire, in water), the associations with fertility.

Clearly, nudity plays an important part of Paganism, so I thought it would be an interesting excursion to go out into SL and see if I could attempt some replication.

I have to say that the day and real life commitments meant I wasn’t able to plan the post and kit any of the models out in appropriate costumes (yes, I know they’re naked, but there would be head gear, cloaks, that sort of thing I could potentially have used). 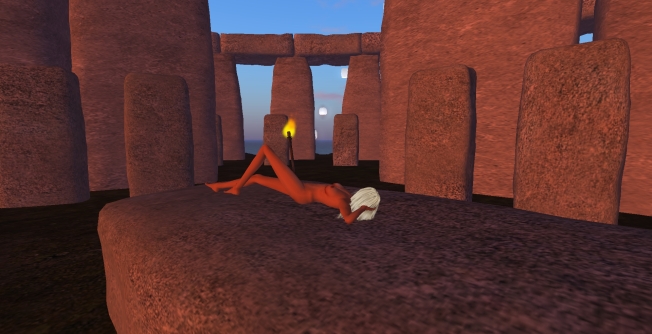 I’ve also added a couple of photos depicting Priapus, but Ella has deemed them unsuitable for the mainstream SLN page. Check out the Harry’s Pix page for these.

OK…my suitcase is packed. And tomorrow evening, just as the sun is setting, we should hopefully be arriving in Vera Playa, our resort for the next week. Here’s myself and Bebe posing for the camera, complete with hefty suitcases. You know, for people who don’t wear a stitch all day, we sure know how to pack a lot of stuff. Oh yes, that’s something of a joke in naturism. We arrive laden with….stuff!….clothes! (for the evenings)…and….more stuff!

Hopefully we’re going to give you a full week of reports, photos and the thoughts and diaries of my two non-naturist travelling companions, Bebe and Nanni.

One word of warning, though. As the TV satellite that served the British community with British TV in Spain was ‘moved’ recently (i.e. they took the signal off it, and moved it to another satellite, thus blocking out all British TV signals) people moved onto the internet to ‘stream’ their TV, this effectively killing off any sort of internet speeds. As far as I know people have bought new satellite dishes and the situation is much improved, but I’ll have to wait until I get there to see how good our internet is in order to get photo-heavy posts uploaded to the SLN site. We may have to move to a ‘lite’ version. Again, everything might be fine. We should know by day 1.

I’ll try and get some more of the backlog of posts cleared this evening, but other than that it’s ‘over and out’ from me until Monday, at some point. Look forward to seeing you then!

I make no apology for one or two recent posts drifting away from SLN’s ordinary ‘naturist’ brief, because I’m rather excited by the way in which builders are beginning to open up different vistas for us to enjoy and, I think, it rather points to people coming to the conclusion that ‘the financial depression’ of the past few years is now coming to an end.

Sims are now beginning to open up again that have no real earning potential, they just exist to look beautiful and enhance our SL experiences, such as this beautiful SL version of Holland.

We must be in Friesland, because those black and white cows are Friesians.

A beautiful Dutch scene, complete with old-style windmill, a canal, and bikes a-plenty around this gorgeous sim

Of course, the modern world impinges on this idyllic scene. Modern, ugly wind turbines blot the skyline across Europe.

A clever build. You can’t visit the polders, but the well constructed sim creates the impression of it going on forever!

This scene of a small harbour reminded me of Volendam or Marken.

‘Yes’, I hear you say, ‘but what has this got to do with SL Naturism?’

Not a lot…right now…but my perception on it is as other types of sim, built for their own sake, emerge, then further naturist locations will surely follow. So stay tuned for that in the coming months.

It also gives me an opportunity to point you in the direction of Dutch Naturist activities.

I’ve been to Holland several times and love it there. Being a keen cyclist, I’m always ready to hire a bike and take off out of Amsterdam, cycling along the dijks, or plentiful cycle paths. Or wander around places like Vondelpark in the centre of Amsterdam, where there are areas where sex, in public, is permitted (read the wiki link, though, for a full understanding of the legality of the situation). Does it happen? Yes. I’ve seen it happen. In the distance, discreetly, on a summer’s afternoon.

I’m not trying to suggest you replicate this in SL, however! I’m merely trying to point out that the cultural breadth of SL appears to be opening up again. And ultimately that will benefit those of us involved in the SL naturist community.

No sooner have I mentioned (moaned) in a couple of posts about the lack of diversity than a bunch of them turn up at once!

Firstly, the Amazon rain forest, which we covered last week, makes a very welcome presence known in SL, and now we have two further ‘different’ type of sims turn up, the first being ‘a Greek island in the Cyclades called Sankonos’, and what looks, I think, as though it’s a Francophone-based island. I’ll try to confirm that, but there’s one or two French language sings (‘Douane’…customs) dotted around. Initially, then, I thought it might be a replication of somewhere like Sardinia, but having wandered around, it’s defiantly, definitely Greek. It looks delightful, a welcome replacement for the much-missed Mykonos sim we lost a while back. A terrific build full of winding alleyways, climbs, detailed cafes, whitewashed buildings. It looks superb. And, of course, there’s a beach. 🙂

I’m guessing Davo isn’t ‘naturist’ per se, but quite possibly naturist friendly, as long as we stick to the beach areas. As in real life, I’d fully expect the sim to replicate ‘lifestyle’, and be quietly accepting of, at the very least, topless sunbathing. The usual rules apply for naturists who may wish to use Davo: be sensible in how much you show off! Don’t tp into it nude, and if you’re going to go nude, choose sensible places to do it, such as its beach. But you’ll still want to throw on a bikini or board shorts to explore its extensive beauty. The sim is designated ‘Moderate’, incidentally, so let this be your guide.

There’s a guide to real life naturism on Greek Islands here. (Note: I got a ‘security warning’ on my computer when I visited the site to make the hyperlink. Please proceed at your own risk if you get the same).

Another site on Greek naturism (specifically Crete) is here.

And Vritomartis, possibly the best known naturist hotel in Crete, has its own website here.

We’re SLN! Of course we’re going to get in a bit of sneaky topless sunbathing!

But until we get some clarity on the dress code, I decided to keep the bikini top in place at times.

The natives are friendly, although the barman’s fishing sweater suggests that the locals idea of a hot evening differs from mine.

You can take a donkey ride around Sankonos.

I do like sims that utilise ‘bots’. They add a sense of life, of movement, to a sim even when there’s no one else around. The sim was quiet when I visited (the early hours of SLT) but bots do give a sense of vibrancy.

All in all, it’s an excellent sim, beautifully built with its little back alleys, shops and so on, and one well worth visiting for photographic potential, naturist, semi-nude, or not. I recommend you visit the island of Sankonos at your earliest convenience. 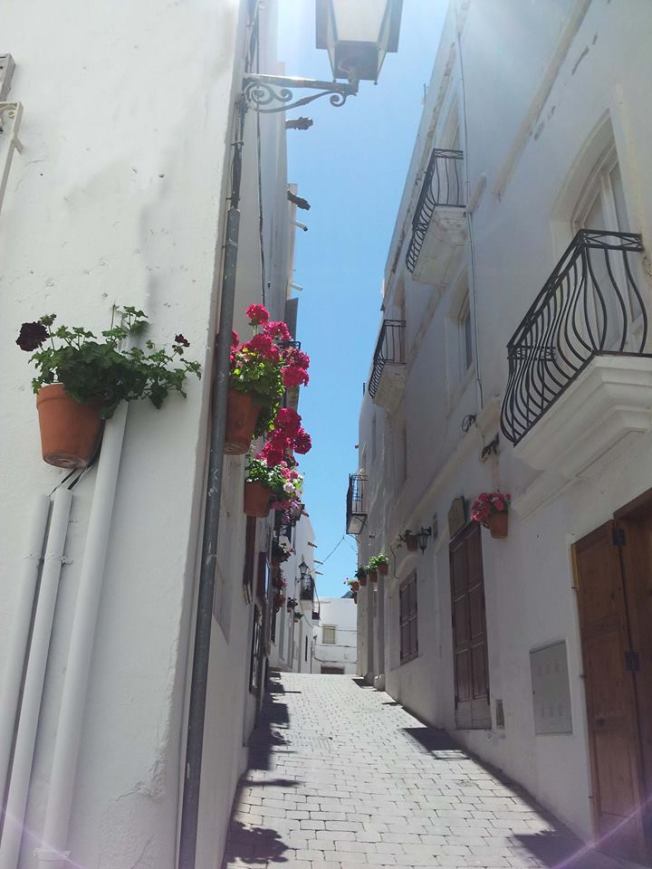 Edited to add: The photo above is Mojacar, Spain, where I’m going next week. You can see how these typically Spanish narrow streets resemble the Greek styled sim, and why sims like this and the much-missed Mykonos always hold such appeal to me.