I’ve decided that, rather than call this a ‘postcard from Spain’, I’d adopt the ‘Dia sin rope’ title for it, although strictly speaking it’s a ‘fin de semana’ (end of the week…or ‘weekend’) that we, Ella and I, are here for.

Ella and I both flew into Spain yesterday, Friday, to different airports and we met up last night. In the end, ‘old hand’ to this part of the world Ella, who arrived before I did, was called to help us out locate the place we’re staying at, as we got horribly lost 🙂 We didn’t end up in Santander….just half a mile from where we were supposed to be…but no wiser as to how to narrow it down from there.

So…I called Ella and asked if she could help. Having identified where it was we were, she provided directions until she had pretty much talked us to the front gate of our accommodation, by which time she and her husband and walked from their apartment and were standing there, Ella on the phone, speaking to us as we arrived 🙂

‘If that’s you in the white Fiat, that’s us waving at you’, she said ‘and if it’s not you then we look pretty stupid right now’.

Fortunately it was us and….wow…Ella looks exceptionally close, in real life, to her avatar. We agreed to meet up the following morning, Saturday. Initially the plan was for our respective partners to run in the naked fun run, as both are joggers, but the weather forecast we’d known of days beforehand had been encouraging both to withdraw their participation as being just too hot for running. In the end, though, they did ‘run’, more of a walk than anything else, but it allowed Mr Pookes to get to know Mr. Keng and for Mr. Keng to show my man some of the landmarks as they semi-jogged the route (and come in well down the field). While they did so, Ella and I walked the short distance from the start line to the finish line, order some coffee from the Puntonat chiringuito, and spent our own time getting to know each other face to face, despite having IM’ed and emailed and texted and called each other previously. By the way…our respective husbands are in the selection of photos below, but I won’t be drawing an arrow at each of them 🙂 And yes, I can see Ella too. 🙂

Other than finding it difficult to remember that we weren’t ‘Ella’ and ‘Pookes’ on this meeting, we already felt that we knew each other really well, and the weekend therefore got off to a great start. 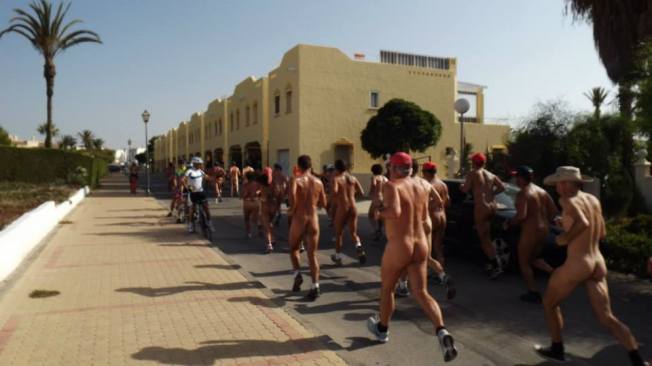 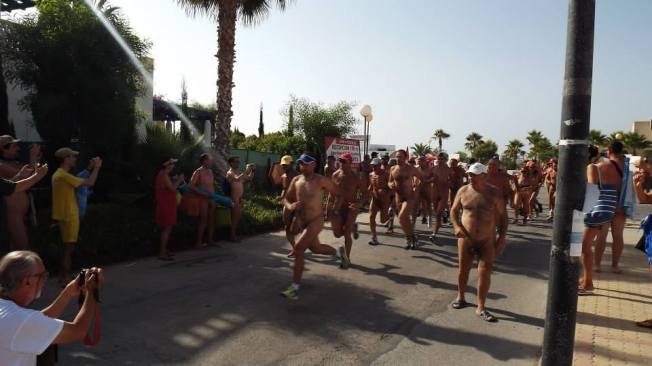 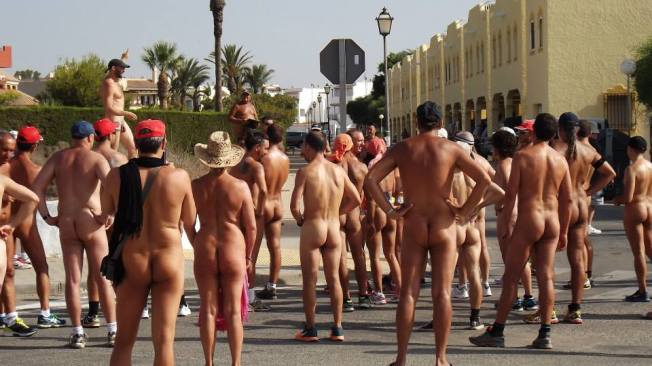 What we’d originally booked for, the ‘Guinness Book of Records Skinny Dip’, won’t be taking place but you’ll be pleased to learn the ‘dia sin ropa’, where beachgoers across Spain, not just here, are encouraged to go nude or, at the very least, be supportive of the idea.

We shall be making our way down there tomorrow and I’ll report back. In the meantime it has become ridiculously hot and humid. If you imagine sitting on the bottom shelf of a sauna, you’ll get some indication of what our apartment feels like. Meeting up with Mr & Mrs Keng and their children later for dinner. I sincerely hope it has cooled a little by then.