I’m going to encourage you to check out Roman Bures’ website. Roman appears to be a Czech illustrator whose site show some charming naturist drawings, full cartoon books, written in Czech, so I don’t know what the story lines are, other than naked people appear to be battling men with guns and triumphing. There may, or may not, be some sort of heroine called ‘Dracica’.

Roman also has a Facebook presence, so if you use that social medium, check it out. 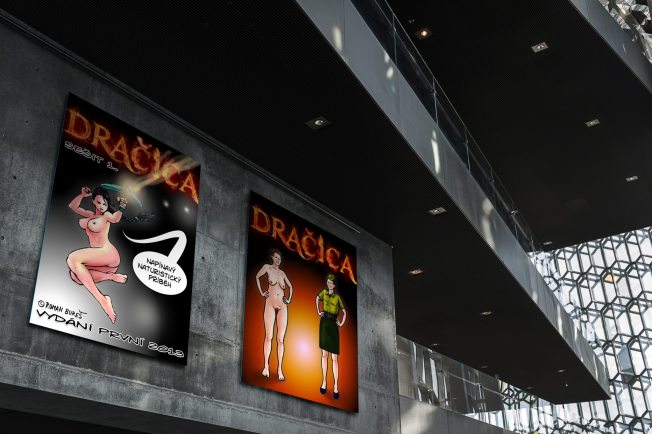 At times like these, Ella would probably be suggesting she wouldn’t show artwork as it’ll be subjected to copyright, so to be on the safe side I’ll do the same and just show a photograph of what appears to be an exhibition of these ‘Dracica’ comics. If anyone in the Czech Republic can provide more information on Roman Bures and his work (in English) I’d be delighted to hear from you.

Why is Roman ‘a hero of naturism’? Anyone creating comics about a naturist heroine is a hero in my eyes. And his drawings also seem to be slipping through Facebook’s ‘no nudes’ net, so he’s a hero for that too. And as SLN did experiment with a ‘comic’ style a while back (Ella’s exploring further options on how the magazine’s formatted in the future), I suppose we identify with what’s going on here -heroic naturists- even if we don’t understand the text. So it seems that Roman really qualifies as an SLN ‘hero of naturism’ three times over.