Earlier in the week I pointed you at an Ice Bucket Challenge pose at Fashowl.

And now another one has turned up at Toby’s Juke Joint, so no excuse not to join the ‘fun’. I think it’s moronic myself. If you want to give, give. No need to indulge in stupid social media memes.

Serious politician? Buffoon? Remember, this is the man who, earlier this week, argued about independence affording Scotland the opportunity to make its own budget on health care. And yet, here he is, effectively acknowledging that, while being in control of that budget he is supporting cash for Motor Neurone Disease (MND – the UK equivalent of the USA’s ALS charity) because it’s…..underfunded? Go figure.

Salmond did it to highlight ‘Gordon’s Fightback’ , a website highlighting one man’s fight against MND, and on that website Gordon Aikman, who is involved in the ‘Better Together’ campaign (that’s the people in Scotland opposed to Scottish independence). You can, as I have, donated via the JustGiving website. No need to faff around with buckets of ice. 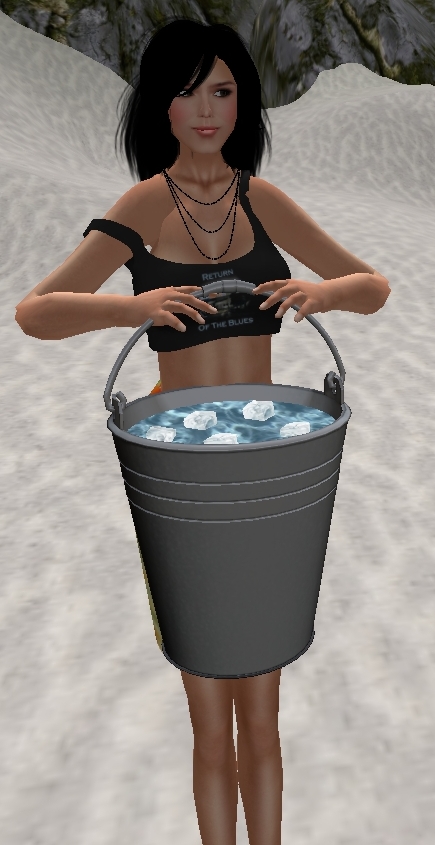 This latest Ice Bucket Challenge pose comes courtesy of Toby’s Juke Joint (you can also pick up free T-shirts, the female one being modelled by Roberta, above). Once again, a post that has precisely zero to do with naturism, and while I persist in the notion that the Ice Bucket Challenge is humans determined to show themselves as sheep incapable of thinking for themselves and displaying an enormous herd instinct, I also think we need to be asking bigger questions of our politicians about why we’re having to indulge in this to raise awareness, on both sides of the Atlantic (and elsewhere). Funding for MND/ALS is quite obviously underfunded if we need to do this to raise cash for it. Perhaps those in the Scottish (and UK) governments need to be asked questions about the pitiful levels of funding for what appears to be a killer disease.