We missed it (curse you, work!) but it’s worth referencing, and we’ll be ‘setting the tatas free’ on SLN tomorrow, Thursday.

The lady in the photo is, of course, Mary Claire from Terra Cotta Inn, showing that with the right weather naturism can embrace all of the seasons.

With just a couple of weeks to go to Hallowe’en, and with SL bedecked in autumn colours, I thought it might be a good idea to get some of our models to do a bit of a scavenger hunt for Hallowe’en-y, naked-y costumes 🙂

And I should apologise for my absence from the blog these past few weeks. A period of training in my new job role has meant RL has taken precedence over SL, but that should be settling down again now, with us getting back to more regular postings. Note that my ‘weekend’ for a while will be Wednesday/Thursday (and Saturday) so that’s when to expect to see new posts published.

Here is a rather strange story about changing room etiquette (from Australia’s Daily Telegraph). I’m not entirely sure if the author is deadly serious or has her tongue in her cheek. I’m leaning towards the former.

I’m not a gym person. I prefer to get my exercise in a pool, or on a bike. But I have, on occasion, used a gym in the past, most recently as a base (in the dead of winter) in which to train for a charity fun run I undertook.

One local gym close to where I live sits next to one of the UK’s  national cycle routes. As I cycle by in summer, the air on my face and ‘a view’ unfolding before me, I sometimes see the doors of gym thrown open, and people, male & female, on exercise bicycles. This astounds me. Why would you choose to be indoors, on an exercise bike, in summer, when you have beautiful nature around you, waiting to be discovered?

But it’s not my place to tell others how to get their exercise, is it?

Equally, were I to join those biking indoors and working up a sweat during my cardio-vascular work out, I imagine that the post-workout shower would, logically, involve a bit of nude showering. You’d agree?

How, exactly, are these Australian women conducting their shower? Is the assumption that these indoor cyclists, runners and pilates disciples should change out of their gym clothes and into a swimsuit after their workout? How silly, illogical and plain crazy is that?

I know that when I used a gym or when I regularly use a swimming pool, the post-workout shower naturally involves me bare in the shower with my shampoo. How else should I properly shower? In a swimming costume? Madness.

If I were to go for a bike ride or a run from home and get back to a shower in my own house, am I putting on a swimming costume to take it? No. And neither are these Australian women.

So it becomes an issue of what’s on display. Well, there’s nothing wrong with what’s on display. 50% of the human population have the same basic bits and bobs, and 100% of the changing room users in that Australian gym will have the same basic bits and bobs. Not be able to accept that says so much more about the article’s author (and her friends, vox-popped on Facebook) than it does about those who will apply lotion nude, post workout. Those lotion appliers seem to have it right. Workout. Warm-down. Shower. And unencumbered by clothes in the shower area!

Adam zoekt Eva is a Dutch television programme wherein a naked Adam is landed on a pacific island and then introduced to a naked Eve and, as far as I can see, it becomes an essay in seeing if the two can hit it off, romantically speaking. In order to spice things up a bit, another Adam (or another Eve) will be added to the mix.

Quite obviously it ‘works’ on the age-old cynical televisual equation of nudity = audience.

I believe that a German equivalent has also been made, and videos of full episodes are easily found online via the main video sharing platforms (along with hundreds of photographs). I watched a couple of the shows and I have to say that it’s quite possibly some of the dreariest time I’ve ever spent in front of a computer monitor because the premise of the show is flimsy, to say the least. It’s simply an exercise in getting naked people on TV. Which isn’t necessarily a bad thing, it’s just that there doesn’t seem to be much point to it other than young, ‘attractive’ (it’s in the eye of the beholder) people who may not be naturist get to play at being naturist for a Dutch (and given the nature of the digital age, global, by extension) TV audience.

Why isn’t Adam 50+ years of age? Why isn’t Eva and larger-sized lady of more mature age? Because it’s not what the audience want, and therein lies the cynical nature of the programme’s pretext. Gimme the perky boobs, the audience practically shout.

OK, normalising nudity on TV isn’t bad in itself, but can’t we have something that maybe reflects real life a bit more? No, we can’t. This is ‘reality’ TV, which to me is an exercise in the vanity of the vacuous. I can’t follow the dialogue (it being Dutch speaking) so it’s hard to know if there’s any depth to the people involved, or if they’re just another bunch of airheads shouting, in a manner of speaking, ‘look at me!!!!’

I suspect that’s the case. I’ve never seen a ‘reality’ TV show yet where it isn’t the case. ‘TV programme seeks vain circus freaks’ appears to be the standard advertisement for reality TV programme makers. 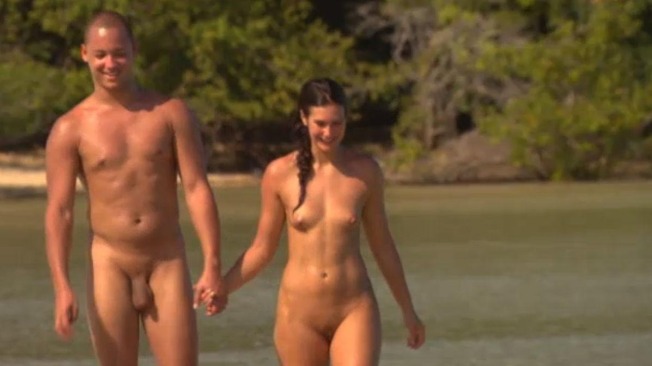 Also worthy of mention in the ‘dumb reality TV nudity’ pantheon must be ‘Buying Naked’ and ‘Naked and Afraid’, shows with equally flimsy reasons for existing, made worse by the fact that they’re utilising the naked angle….and then pixelating it! What? Could there be anything as daft as that? (although in their defence I’d say that the ‘Buying Naked’ show at least reflects the fact that people over 30 still have naked bodies underneath their clothes).

So, you get that I don’t care much for these type of shows, and there are those who would disagree with me.

Naked on TV is fine by me, as long as these involved aren’t pointlessly naked and pointedly one dimensional.