My function, as editor of SLN, has sometimes been to explore avenues I’d previously been unaware of. I’ve written, before, how I’m not overly excited by nudist websites where photographs are the focus.

To me, the textual content of a website is the primary source of interest. Thus: you’ve been to Koversada in Croatia…tell me what restaurants I should try. What’s worth seeing in the area? Even if it means putting on stupid clothes in that heat.

But I’ve been recently going around numerous tumblr websites dedicated to ‘the nudist’ on the basis that they inform my decisions regarding SLN. If ‘body painting’ seems to be a thing in real life naturism, shouldn’t we cover that? If pubic hair, circumcision, genital piercings, swingers or anything else are vexing RL naturists, shouldn’t SL naturism reflect that? Well, of course.

What I see on those websites do have an impact on what SLN covers.

So here’s the deal. You look at a tumblr archive. What’s the deal, in this context? 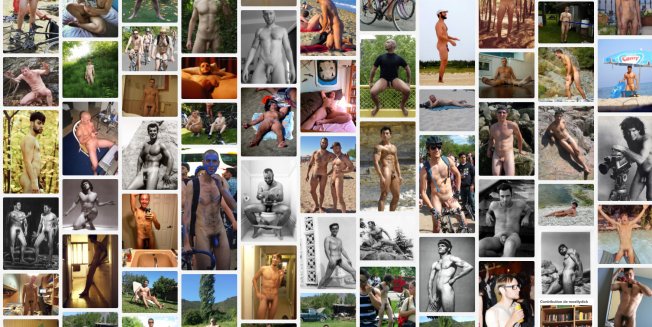 You’ve got it. Eventually it all bends into one, and the focus goes back on ‘people’, not their generally accepted ‘private’ parts. Eventually, you’re thinking ‘that’s a gorgeous beach, where is it?’

Eventually you’re thinking ‘I need to think about booking holiday there, wherever it is’.

We become more than the total of our genitalia.

Admit it. You’ve stopped looking at the photos -too much to focus on- and begun to look at the words -what people are saying.

That’s just what RL naturism is about. Judging people according to their words, their personality, not how big a cock or tits they have.

If you’ve not experienced RL naturism then look at the photos above for a second, then look away. Can you describe anyone in the photos? No. It fades into one large mass.

And the RL naturist beach is like that. You aren’t focussing on an individual. You can’t think of an individual. Some are bigger, smaller, younger, older, more tanned, less tanned than their neighbour. In conversation, you’ll focus on what they say, not how they look. Reflect, too, on whether any individual in the photos might look back at you. No, you aren’t that beautiful, attractive, gorgeous. You’re a human being with bits in the right places.