I do regularly link to Britain’s Daily Mail newspaper because it’s the one paper in the UK who adopts a swivel-eyed, hypocritical stance to nudity or semi nudity. Some print stories/photos of this without further comment, realising that we’re all old enough (be we 6, 16 or 86) to know what a nipple looks like, we all have them. Others quite obviously use female nudity as a device to shift papers.

The Daily Mail, disparagingly called the ‘Hate Mail’ by some, is never one to miss a trick where it can express ‘outrage’ about numerous things in modern life, nudity included, while squeezing every last ounce of coverage it can from its outrage, and I think stands alone as the one UK paper who can express ‘outrage’ while printing story after story about nudity.

Many in the UK will recognise, according to the Daily Mail, everything wrong with the world is the fault of ‘foreigners’. Polish immigrants to the UK are stealing British jobs, apparently (disregarding the fact that many of the jobs they do wouldn’t be filled by lazy, work-shy Britons whose existence on social benefits seems like a preferable life to actually working for a living). Racist, homophobic and xenophobic, the Daily Mail (DM) is a joke, pitching itself as a ‘serious’ paper yet peddling the lowest common denominator of press coverage imaginable. If there’s a Pole, a black person, a gay person involved, be assured the DM won’t fail to mention that fact.

Imagine a good Samaritan type of story. A white, elderly woman is mugged. Three passers by witness it. One, a Pole, gives chase to the assailant, catches the white, British teenage hoodlum and pins him against a car until the police arrive. The gay man is the one who rings the police and ambulance. The black lady, a nurse, administers first aid.

Typically, the DM will report it in the following manner: ‘Polish immigrant Stanislaw, 23, was unconcerned about the scratches on the car to which he held the assailant. Meanwhile, John, 47, a gay man who lives with his HIV positive partner for 20 years, phoned the emergency services after which he and Afua, 37, a Muslim from Ebola-ravaged Sierra Leone, administered first aid.’

The subtext is always that the Pole has caused some damage, the gay man might have HIV, the African nurse might be carrying Ebola while coming to the aid of a white, elderly woman. Get the picture?

Where’s this all heading?

The DM is almost car-crash journalism. You can’t help yourself from looking. I know I can’t. I do try to avoid most of it, but its fascination with nudity, and outrage at the same, keeps me returning, if only for amusement at its Little Englander stance.

Pookes’ post on the #freethenipple film and campaign yesterday led me to follow up on her links and further explore the campaign. And that, in turn, led me straight to the DM and an article about Miley Cyrus posting a topless photo of herself on Instagram.

The DM ‘tastefully’ pixellates her nipples from its coverage, lest we be offended. 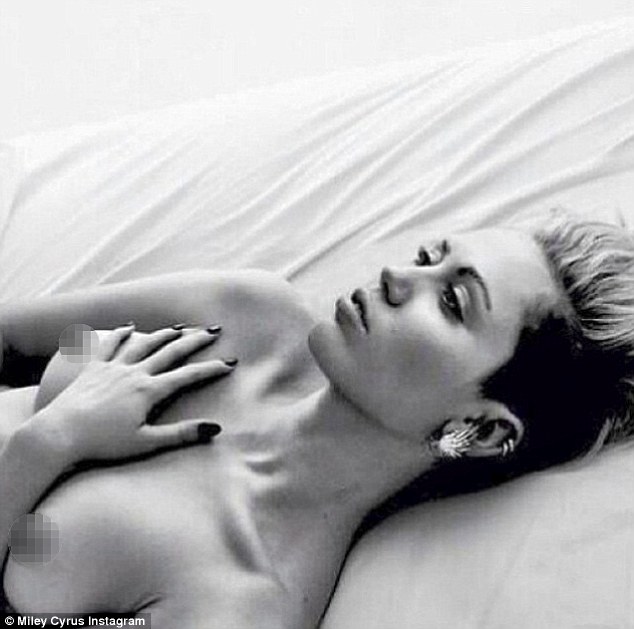 So what do I see? A pretty young woman in a pose that wouldn’t look out of place in an art photography shoot. A dramatic, b&w depiction of the nude form, a staple of art since man began drawing on cave walls, almost.

Why pixellate? What does the mainstream media find so offensive about this? After all, it’s a puritan stance shared by many media outlets, not just the DM.

And yet these social media outlets still continue to allow graphic depictions of violence? Of beheadings? Isn’t it all just a little bit strange?

I think, in 2015, one of our goals should be to #freetheSLnipple, as there are locations within the game where a similar stance to the DM is much in evidence. ‘No nudity’, the signs say in stores, in various sims, yet a guy in a pair of jeans is exceptionally unlikely to be challenged for his mode of dress while a female avatar will be remarked on, challenged and maybe even banned.

In 2014 we’ve promoted and support those stores and blogs who adopt an adult approach to nudity.  We shall do so again in 2015. Isn’t there something strange about a skin store that blacks out the nipples on their wares? Nipples come in a variety of shapes, sizes and colours. Before I buy a new skin, wouldn’t I like to see the ‘full effect’? You bet I would.