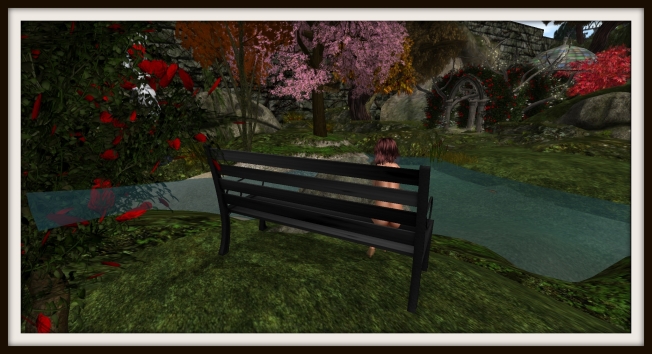 Laugh at my foolhardiness, or gasp with admiration, but the thermometer on the wall outside our back door is reading 13 degrees. There’s no breeze, and the sun is out. So what else would I choose to do other than make a cup of tea, and slip outside as nature intended for 30 minutes under a pleasant sun on an agreeably pleasant spring day. 13 degrees did not feel cold, chilly or anything unpleasant.

It was quite unexpected, but welcome nonetheless. It was one of those spur-of-the-moment things. No one home but me, the garden looked inviting, and…well..why not?

I could have sat longer were it nor for the fact that I’ve got RL work to do, and a school run in about an hour. It simply felt good to be alive at the end of a long winter, and know that from here, the weather will only be getting better, with more opportunities for more RL naturism. Here’s hoping your 2015 naturist season begins soon.

I like the entire concept of ‘Burning Man’. So much so that it’s my hope that SLN have a presence at the SL version this year.

What I like about it is the freedom of expression, the art, the sense of being individuals in an increasingly homogenised world.

I like News, too, particularly news with a societal angle that has ripples from history, particularly in the context of the islands previously known as  ‘the British Isles’ (i.e. the current United Kingdom and the Republic of Ireland). Because that’s part of ‘the day job’.

As a result I do a lot of clicking around news stories that may be of benefit to my job in respect of how their occurrence, and the reaction to these events, do not happen in isolation. I won’t go into much detail about the short, medium or long term history of Ireland, specifically Northern Ireland, because we haven’t got hours for you to even obtain a veneer of knowledge about the subject, and it’s not really relevant to SL or SL naturism.

But this story, from BBC Northern Ireland, caught my eye this morning. Essentially a Presbyterian minister has declared that an art project, built, visited and which will eventually be burned in the city of Derry, as with Burning Man himself, to be ‘pagan’. Hmm…it’s not as if Christianity didn’t nail their colours to the mast of Pagan worship practices in order to make Christianity more amenable to previously Pagan tribes in the British Isles (and elsewhere), is it?

I looked into the Burning Man which is similar to this and a culture has developed that anything goes.

“My fear that is that we go down a similar route to this in the future.

“Dealing with loss is extremely difficult but the burning of the temple is contrary to what the Bible says.

…says the minister in question.

Inclusivity, communal effort, civic responsibility, participation…aren’t these all key elements of the teachings of Jesus?

Perhaps the ‘decommodification’ of society, the rejection of materialism, the lack of ‘coveting thy neighbours goods’ is in line with Biblical teaching too. Am I alone in thinking that the values of the counter-culture are more likely to lead a way to God? (Perhaps not in the sense of singing hymns and so on, but certainly in the sense of a good, Christian spirituality, even if the word ‘Christian’ isn’t used once).

During research for some posts, I ended up on one or two tumblr sites, where the image above seems to be doing the rounds. You know my views on this 🙂

How people choose to tend their ‘lady garden’ is a matter of personal choice, and I’m not about to project my own opinions onto that. What I will say is that it’s an exceptionally weird world that quantifies pubic hair as a ‘fetish’. No, it’s not. It’s natural. If there’s a ‘fetish’ at work, it’s those who are militantly opposed to its presence and regard it as ‘yucky’. Wrong.

I’ll take this post from an SL perspective, something that I think often reflects RL attitudes in so many ways. Six years ago, the presence of pubic hair on either sex was rare. This probably represented the zeitgeist of the time in RL (as well as maybe being seen as an unnecessary ‘luxury’ on which to spend Linden dollars). Today? The sims contain rather more evidence of the lady, or gentleman, garden in place. Not often a wild jungle, but a trimmed, neat and well-maintained lady garden nonetheless.

We’ve written about this before. I suspect we will again.

Let me ask you, though (male or female avatar): have you now begun to maintain an SL lady or gent garden? And is this reflective of RL trends?

A story in today’s Independent newspaper suggests that the NHS (the National Health Service, the UK’s point-of-contact free medical care for all service) will, in future, categorise patients it treats and who have evidence of genital piercings as having suffered FGM -female genital mutilation.

I’m not sure what the picture lookalike worldwide, but here in the UK there is a groundswell of opinion that FGM needs to be outlawed.

FGM -Female Genital Mutilation- is essentially female circumcision. It is practiced widely, and almost exclusively, across northern and central Africa. I would be opposed to the practice, on the basis that there is never a need for it, in terms of health benefits. There is also little evidence of it even being a practice particularly bound up in religion.  At the same time, I wouldn’t be too enamoured with its name. Mutilation is an emotive word which, for me, provides a vital clue into the historical perspective of the practice’s critics : people with an agenda in cultural imperialism as much as anything else. Many of the posters and campaign literature associated with groups keen to see the practice end frame their graphics in similar emotive, blood-stained illustrations.

It would, I think, be better if the practice was referred to as ‘female circumcision’, and have the practice of genital cutting for both men and women described in similar terms.

You can read a UNICEF report on the practice of FGM here.

It’s also easy to support an ending to the practice on the basis (from a western perspective) that it’s a form of child abuse, carried out against minors who are not afforded the voice to say ‘no’ (not dissimilar to the male version performed on infants). The male variant does, in a small number of cases, have sound medical reasons as to why it should be carried out, but these do not normally manifest themselves before adolescence or adulthood, when the person undergoing surgery would have the cognitive power to understand what’s going on and why.

The BBC also provides a guide into the practice of FGM in light of these new rules.

A clitoral hood piercing is, apparently, the most popular form of genital piercing and naturally there are those in the UK who think these latest guidelines overstep the mark. Possibly they do, but there seems to me to be sound reasons why they’re in place. The practice of FGM is illegal in the UK. There are many immigrants who live here and who will be culturally aligned to the practice. So when their daughter is born, where does the cultural practice take place? In back street ceremonies, I would imagine, and thus the guidelines are in place where children, in particular, come into contact with the NHS and it’s a duty to report this form of child abuse.

Within Second Life there are literally dozens of forms of piercings that can be purchased, all very visible within the SL naturist community. 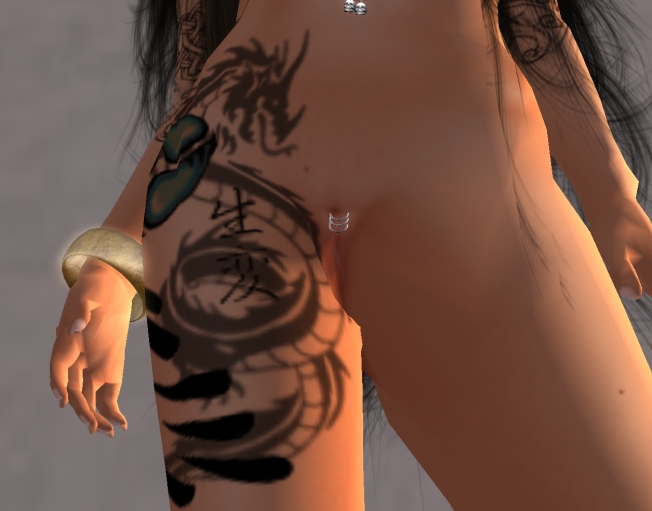 It’s not something I would do myself in RL, or even would wear in an SL context, but despite my personal dislike of piercings (I only ever had my ears pierced, once, when I was a teenager and when my earlobe became infected I swore ‘never again’) I do find myself in sympathy with those who say there is a clear difference between a child suffering widespread mutilation of their genital area and a consenting adult who chose to have a piercing -which can be removed and the area return to its pre-pierced state.

I understand the NHS’s reasons for adopting this approach. I’m less confident in us reading, somewhere down the line, that NHS staff have chosen to report an adult woman’s clit ring as FGM and that a court case regarding it is about to commence. Does that sound silly? Probably, but I live in the UK which has a great track record in busybodies choosing to over-step their remit quite simply to comply with ‘rules’ and without the application of that rarest of commodities,  ‘common sense’.

Readers beware: research into this article has revealed that several (male) journalists are describing this as ‘vaginal’ piercings. You can’t have a vagina pierced in such a manner. The clitoris and labia, yes, the vagina, no. Please be aware of this if following down any links written by (male) journalists. If they’re this good with their personal road map to a woman’s body, one can only despair if they’re trying to negotiate the London Underground. Vagina to Clitoris, one way, with a change at Labia, only to discover they’ve emerged at Anus in error…. 🙂