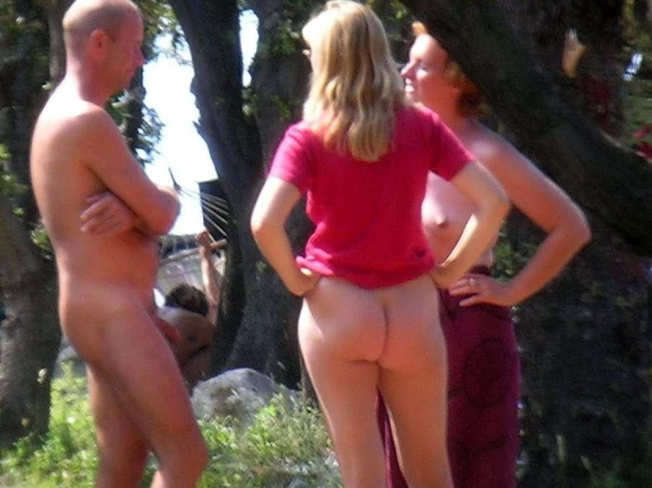 The male is fully naked. One of the females is topless. The other female is bottomless.

CFNM, we learn from wikipedia, is often assumed to be a form of exhibitionism or a sexual fantasy. CFNM means, of course, ‘clothed female, nude male’.

Yet the photo above, taken in a genuine naturist setting, has all of these themes missing (apart from in the mind of some viewers of the image). It’s just a natural thing. Many naturist women, sometimes myself included, will fling on a sarong to walk from the beach to a nearby beach bar, to buy drinks or use their lavatories. Sometimes I cover up totally. Sometimes I tie it at the waist, going top-free. So the woman on the right, in which looks like some sort of camping or beach situation, is possibly engaged in an activity at the time the photograph was taken.

The body language tells me that the male and the bottomless female are a couple, the topless female a friend they’ve met on holiday. The topless female is engaging in conversation with the male, her eyes fixed on his. His nudity is not something she’s focussed on. He is not ‘exhibiting’ for her. He is not engaged in a sexual fantasy.

The bottomless woman might wish to be fully nude, but we naturists are aware of the power of the sun at all times. Ergo, we sometimes cover up. Again, my shoulders can really suffer, so it’s not uncommon to throw on a T shirt to protect one from the sun, particularly during the hottest part of the day. The bottomless woman in the photo is almost certainly engaged in a similar sort of form of protection. She is not exhibiting, or drawing attention to her genital area. The photo says to me that she’s giving her skin, particularly her neck and shoulders, some respite.

In naturism, these acronyms are never a thing. It is only pornography that seeks to make them a fantasy, a fetish, or something unwholesome.