Click over to photographer Samantha Fortenberry’s web page for a mini-series of naked people in the bath. Vibrant colours, pastel shades, and a series called ‘Suds & Smiles’. Looks like a lot of fun to me. 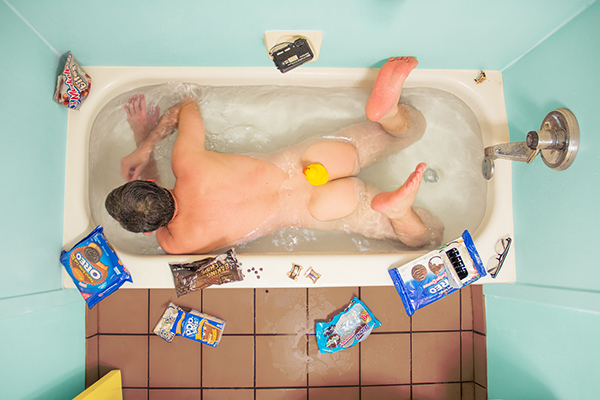 Usually, at this point, I’m citing the ‘we won’t use the photos which are subject to copyright’ argument, but it’s a mini-series, so it’s sort of necessary to use one of them for illustrative purposes.

Madonna’s at it again, instagramming her censored naked body on the social media site to highlight the hypocrisy of social media. All good so far.

But she’s hardly ‘taking a swipe’, as The Independent puts it, is she?

Could it be because her new album is tanking in the US? A bit of perfectly timed ‘controversy’? As if we care anymore? Or ever did?

She’s 56. I think it’s great that she’s still relevant to (some) people. But the hashtags are pretty….hmmm…laughable (a bit like anything I’ve heard from ‘Rebel Heart’ then). Art for Freedom? We’ve all seen better art-nudes. Unapologetic bitch? Surely the unapologetic thing to do is remove yourself from the apparent 3.4m followers you have on the social media site and wait it out until Instagram (or Facebook) has a censorship change of heart? No, that doesn’t work, does it? It’s all about the oxygen of free publicity. ‘Rebel Heart’? Empty platitude.

It isn’t even as if her breasts are something we’ve never seen before, as if this is going to be some ‘stripped bare’ revelatory moment. We’ve seen your breasts, your ass, your intimate parts following a millisecond search of Google. The album is still a turkey.

Despite months, maybe years of swearing never to add any further forms of social media to my life, I succumbed this morning and set up our own SL Naturist flickr page.

Why? SL Naturist can’t possibly publish all of the photographs that we collectively take. I’ve had Harry taking literally hundreds over the years, with Diane, Jose and recently Hugh adding to the collection. Pookes and I also take photos.

Essentially, I just need to illustrate the posts, not flog an idea to death. Equally, many of the shots on SLN can be of the ‘holiday snapshot’ variety. We’re just illustrating a post, an idea, a sim, an event.

As the page stands right now, I’ve only featured avatars with whom I’ve had express permission to photograph if nude.

Our photographers do like to exercise their artistic flair, though, none more than recent addition Hugh, who is evidently just as happy photographing SL architecture as he is nudes.

For these reasons I’ve decided to start the Flickr page so we can show some of this work, including non-naturist SL photography (even though it flies under the SL Naturist banner on Flicker).

At the time of writing I’ve not managed to get a direct Flickr link operational on SLN’s front page, although you will find a working link in the ‘Blogroll’ sidebar, or you can use the link at the top of this blog post.

I’m mentioning the ‘permission’ issue because, for example, in the photo (above) another avatar has his back turned to the camera, so isn’t readily identifiable (even though I know who this avatar is). I would rather hope, though, that I can come to some sort of arrangement where I, or any of the others taking photos for SLN, can get the ready agreement of avatars to ‘smile for the birdie’.