While we’ve touched on gay naturism before, indeed, did we blog the first SL gay kiss away back in September 2013? But its not something that we’ve covered extensively. Not because we have any prejudices against gay naturists, it’s more to do with the fact that, within real life naturism, I don’t find any segregation between people of different sexual orientation and it’s hard to think that we have to have that segregation within SL.

Cecil (left) and Ringo (right) and their kiss from SLN, September 2013

In over six years of playing SL I’ve met very few gay, male avatars at SL naturist sims. By contrast, there is quite a number of  ‘bi’ or ‘lesbian’ females, and while it may not be an absolute truth, my assumption is that a female ‘bi’ avatar  is a man working a female avatar and engineering girl/girl fantasies for his own gratification, almost 100% of the time.

There are strange friendship relationships in SL. Females will make friends with both males and females, but males generally don’t friend other males so often. What’s the deal here? In RL males will always have a ‘group of mates’. A football team, drinking buddies, whatever the interest is, there’s a group of males enjoying it. So why don’t males friend males in SL? Another debate for another day.

I decided it was time that we undertook a comprehensive look at the gay naturist scene in SL, and so I’ve enlisted the help of my friends Ringo (who was one of the participants in that gay kiss mentioned above) and Liz to guide me around some of their favourite gay and lesbian nude locations in SL.

Ringo (with the sandwich), his boyfriend Ori, and Ella discussing the gay naturist scene

‘Yes, I know it’s a backwards looking step for the gay community to actively segregate themselves from other sims when we’re working so hard to not be…off there, somewhere in the real world’, says Ringo, ‘but I understand why it has to be done. Without some sense of segregation there’s the chance I could go to a sim where I begin chatting to a guy, he complains to the sim owner, the sim owner decides whether he needs to bar gay people or homophobes, whatever! It just makes it simpler to say ‘here’s a gay sim, a lesbian sim, you know what you’re getting into if you teleport into it”.

I’ve not spoken to Ringo for several months, and in that time he has got himself a new SL boyfriend, Ori, a man whose avatar is modelled on that of a ‘gay bear’, he admits, and who sports an impressive handlebar moustache that he says he knows is ‘pure cliche, but it’s like a badge that says ‘I’m gay’, that pre-announces my avatar’s sexuality before I say anything, even if I’m at a sim that isn’t gay’.

Ori is an immediately likeable man who speaks thoughtfully of Second Life. Whether I’m lucky to meet the right people, whether I’m working in an area of SL to which thoughtful, intelligent people are drawn, I don’t know, but it’s my experience that those involved in naturism on the grid are almost uniformly bright, witty and deep-thinking. Where local chat and sometimes IMs are a glossy veneer of chat, when you sit down to discuss weightier matters on any topic, sometimes better or best conducted via exchanged notecards, then people tend to let deep and fierce intelligence shine through.

‘The moustache is very out of date in the gay scene, it’s something of a gay cliche as I say, but it does flag things up a little bit. I’m an older guy in RL, and can remember when homosexuality wasn’t treated with the same respect it’s afforded now, when there weren’t Pride festivals, when ‘gay bashing‘ was considered almost normal! It was a time when identification was undertaken in coded ways and, in a way, the moustache is slightly nostalgic for me in that respect.’

We’re at the French Lover’s Resort/Naturist Gay Zone, a long standing Francophone sim in SL, and expansive in size.

It looks marvellous, with lots of French signs and cars dotted around, a beautiful little harbour with a ferry that will take you to the beach at the back of the town (or you can walk).

‘For naturism, this is probably the only gay sim in SL’, Ringo tells me, ‘but naturism is only part of what we do, who we are, in SL. I know we’ve (i.e. Ringo and I) have IMed each other in world before and you’ve nearly always been at a naturist sim while I’ve often been clubbing, hahaha! But if we’re feeling in a beach frame of mind then this is certainly where I’d come. Of course, there are other gay sims with beaches too, and sometimes these will be labelled as nude beaches, but I would say this sim is the only full-on gay naturist one. There’s Spurt Beach, and Sanctum is gorgeous!’

Female avatars are prohibited from Spurt, while Sanctum appears to be less restrictive in that respect, so I was reliant on Ringo visiting both and sending me photos of each. 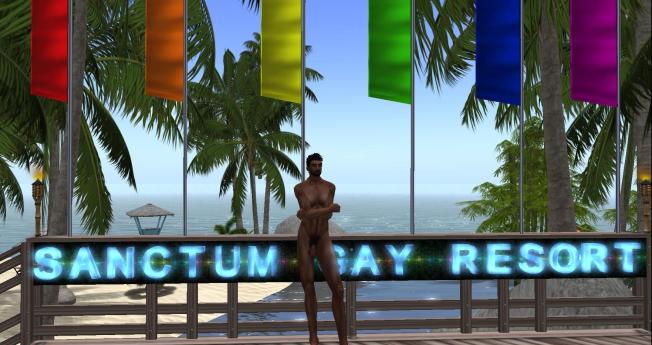 ‘And that, my darling, is probably the very best of what gay naturism can offer in SL’.

I thank Ringo and Ori for their time, and head off to meet Liz, another old friend in SL.

‘There’s only two I know of worth mentioning’, Lizzie tells me, ‘and that’s Lesbian Nude Beach and Bare Buns Women’s Only resort, which isn’t naturist -clothing optional- and is women only, not specifically lesbian. They’re the only two I’d know of or use. A naturist beach probably isn’t the first place I’d be thinking of in SL anyway. I don’t particularly see it as a big thing, as the social element of SL, the dancing and dressing up, would place a bigger role in my SL. I can’t really speak for others as to whether they need or require a lot of naturism. Some clubs will have nude nights anyway, but I think we like the idea of dressing up more and playing roles within SL. Lipstick lesbians…boi…butch…femme….all made for SL clothing expeditions, hahaha!’ 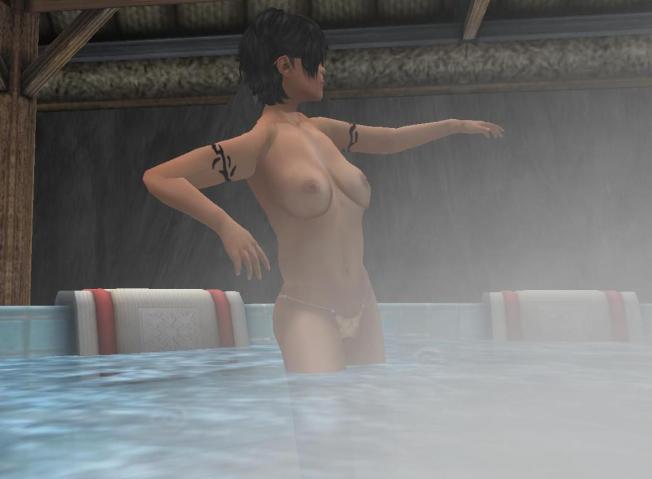 There’s not a huge amount of opportunities out there for the lesbian and gay naturist community out there, and the boys seem to certainly fare better. But there are, at least, some locations, and I was particularly impressed with the French Lover’s Resort/Naturist Gay Zone and with Sanctum, both of which I visited with Ringo.

Many of the posts on SLN are inspired by real life news or events applied to SL, whereas this one, beginning with the SL perspective, led me back to RL, and identification of gay naturism as a SIG -a Special Interest Group- within the umbrella of naturism.

Oh, and Ringo remembers where we first met. Shopping for denim shorts, away back in the days when the looked painted on and dreadful, as oppose to more realistic mesh ones available now. ‘I was brand new…you were a few months old and we probably looked dreadful! Both of us having bad hair days. You might still have been wearing your new avatar ponytail, hahaha!’