Bloggers will take inspiration from others’ ideas, develop, tweak, bend and twist an original idea out of shape to fit their needs. A perfectly valid approach in all manner of writing.

I did this in respect of a post on Canary Beck’s blog, applying a naturist reading and analysis of her poll into SL sex attitudes. (As an aside, if all texts can have a dominant, resistant, ‘queer’ -a more recent addition to the manner in which we approach a book- feminist, or a Marxist reading, would it be possible to have a naturist reading of a text? Or, at least, a ‘naturalist’ or ‘environmentalist’ approach to a book? I must try this with someone fairly short, sweet and familiar to see if I can make it valid in this context 🙂 )

In turn, my post on wanting to be alone has had Becky tweaking that idea. Ideas get shared around, expanded & stretched.

As part of the conversation, Ever Afterr pointed to a blog unfamiliar to me, Prim Dolls, wherein that blog’s author, Deoridhe, has a section on ‘How not to….‘ in SL. How not to…do this or that, with ‘How not to pick up a chick’ being the most expansive section. It’s hilarious reading, and one despairs for some guys and their social skills (or lack thereof).

This got me thinking about what makes for good SL male company and I’ve come up with the answer….older men! (Calm down, Barbara, lol!)

Think about it, particularly if you’re a female SL player. Scroll through your friends lists and make a quick note of what you know about them.

As a lifestyle, naturism is often for older people, people beyond the age of 40, in many instances. Children grown and moved to university…less hangups about their bodies than younger people…there’s a number of reasons why it’s an older person’s lifestyle, and I’m not going to re-heat those reasons that I’ve outlined on this blog many times before.

Maybe it’s people of that age group, desirous to have some familiarity with naturism, who adopt a naturist persona within SL. Sometimes it’s RL naturists, who fit into the RL naturist age demographic, who simply become SL naturists. Who knows? What I do know is that many of my SL male friends are older guys, and either RL naturist, or people who would like to be RL naturist but for one reason or another can’t and thus utilise SL naturism as a substitute. 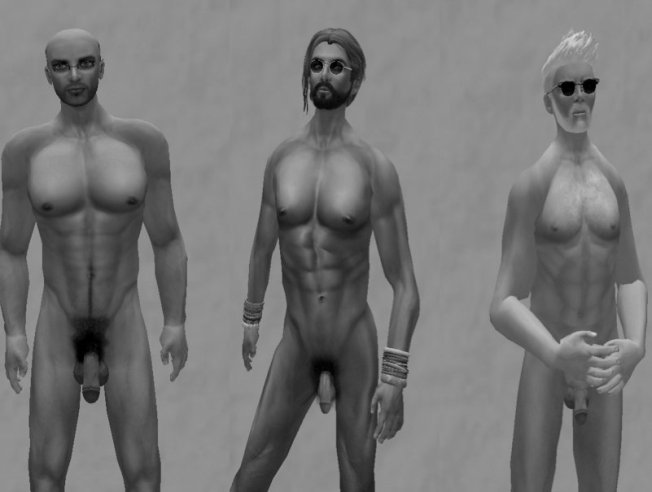 Anyway..you’ve made a mental note of your SL male friends. Assuming, in the course of conversation, you’ve revealed a little of your real selves to that person, what do you notice?

If it’s anything like my experience, you’ll be aware of their RL age (even if it’s rounded to a decade…’I’m in my fifties’), and they’ll have been quite open about their marital status, their children, maybe their job (‘…my wife’s a teacher, I’ve two kids in college and I work in aeronautics….’). You don’t need to know their postal/zip code, obviously, but they’ve been open and honest about their real lives.

While I’m never in a ‘bump pixels’ scenario with anyone, I am very often naked at naturist sims (it’s a kind of logical thing, yeah?) and I will be in conversation with someone who says ‘I gotta go now’, and poofs. Some will be absolutely honest about it…their wife/partner has just pulled up in the drive. ‘Bumping pixels’…well, how are you going to explain that to a wife or partner? ‘I play an online game and this is my cartoon indulging in cybersex.’ Awkward? And then some!

I imagine it wouldn’t be any less awkward to explain ‘this is Ella and we’re just chatting, while our cartoons are naked, on a nude beach in an online game’. It’s easy to understand why they log out, quickly.

Despite that, perhaps because of this, you find that you do enjoy speaking with them online. The conversation flows, there’s no awkward pauses.

I have to confess that I’ve an inquisitive mind, so I don’t mind someone explaining the minutiae of their real life passions. Indeed, I’m often given the names of websites, or of books, about a topic that I will chase down and read. Simply because it sounds interesting. Of course, I don’t really want to buy some wire and fluff and begin making my own flies for fishing, but I am consistently inquisitive about topics such as this from a philosophical perspective. ‘I stick the radio on and can lose myself in my passion for an entire evening’. Yeah, we all identify with that.

Why is this? I have a theory that older guys in SL will have lived life, have a stockpile of memories and anecdotes, have tried different things in RL and thus are capable of speaking on a wider range of topics. Certainly for me there’s no question of these relationships being anything other than platonic, but it’s only on a rare occasion that an older guy has come onto me (they’re routinely muted if they do). Their interest is more in the conversational.

I’m not sure if ‘babe magnet’ is a term that applies to a friendship between a guy in his fifties or sixties talking to a woman locked onto the ‘Big 4-0’ co-ordinates 🙂 but I find that it will always be a case of me chatting to and subsequently friending guys who are certainly beyond the ‘Big 5-0’ or ‘Big 6-0’ birthday cake.

Deoridhe’s tales of approaches by male avatars are, in equal parts, hilarious and tragic. They simply don’t have the life experience to make conversation zip along in a funny, informed, intelligent way. Of course there will be exceptions to the rule. Of course there will be self-assured, well-read, intelligent and conversational guys barely out of their teens, but these are very much the exception.

I’d love to hear about your own perspective on whether your RL male friends experience mirrors mine, or if you feel my analysis is wide of the mark.