I assume, since Dutch & Canadian citizens were also involved, that the media in those countries as well as in the UK are widely reporting the story of tourists stripping at a sacred site in Malaysia.

One British female was involved and thus it has been widely reported in the British press.

The essence of the story is above: people strip off, people get caught, people get stuck in a prison. ‘An earthquake has occurred because you have angered the spirits of the mountain’, the British press reports the Malay people as saying, and thus sensationalising a story in a rather odious ‘oh look at these foreigners and their half-baked cultural ideas’. I find this sort of reporting, diminishing a people’s long-standing culture, odious. We are enriched by cultural diversity, and any attempt to homogenise culture, with the suggestion that the rest of the world should tweak their customs to suit our sense of ‘a bit of fun’ being objectionable.

This sort of behaviour isn’t new. We reported a similar sort of thing occurring in Cambodia in February.

So just how stupid do you need to be to read the stories from February and continue to do it in June? One of the recurring phrases in some of the British media reports was that these tourists were not only guilty of public outrage, but also of ‘a sense of entitlement’. In my eyes, that’s worse than ‘public outrage’. To travel abroad and imagine you can trample over other people’s feelings and culture, just because you’re white, middle-class and European (or north American), is deeply annoying for many of us. Why did you travel abroad in the first place? Oh yes…to experience different cultures. Well then, respect those cultures, don’t ride rough-shod over them.

I know you’re all young. We accept that part of the territory that comes with youth is being stupid. We will take your stupidity as read: don’t go out of your way to prove it further. 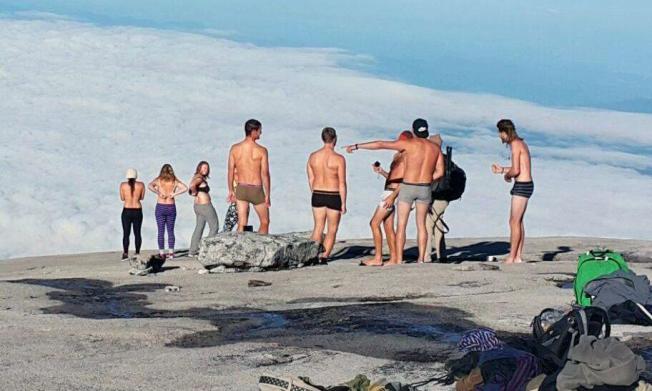 I briefly wrote for a media organisation as I do here at SLN, on matters pertaining to naturism, i.e. the ‘fringe’ aspects of it, as with this story. My career there lasted one column 🙂 I stated, as I have above, that while nakedness is fine, there’s a time and a place. I was immediately attacked for ‘not being a true naturist’. The true naturist, I was told, would support people’s right to go nude anywhere, the naked body isn’t offensive. Indeed it isn’t, but there’s still a time and place. These militant naturists imagined their ‘rights’ should trump all others. To me, it wasn’t the spirit of naturism which espouses respect for all: to imagine that gave these militant naturists priority seemed less in the spirit of the lifestyle, more like nudo-fascism.

If there’s any sense of ‘entitlement’, any western nudo-touristm that has been displayed in respect of this case, then the three day jail sentence (backdated to cover the time already spent in prison) is unduly lenient by the Malaysian authorities. I’m a naturist yes, but I’m not one who imagines anyone has any rights to strip where they wish. This isn’t a popular view amongst some sections of the naturist community, I know, but I really don’t care. To gain respect, you show respect. While these young people are hardly representative of ‘naturism’ in any shape or form (despite being called ‘nudists’ by some sections of the British press) it is exactly irresponsible actions such as this, disrespecting the feelings of others with a sense of ‘entitlement’ (the same ‘entitlement’ displayed by some militant naturists) that represent a danger to naturism. They -militant naturists- will say (as The Naked Rambler does, and we spoke about him earlier this week) they are at the vanguard of those increasing naturist ‘rights’. Without their ilk, the Emmeline Pankhurst’s of this world, there would be not votes for women. It’s comparing apples with pears, I feel. Yes, attitudes change towards nudity. There’s much more flesh on display than ever before. While I welcome that, I am not remotely impressed that there are those who feel the need to offend the cultural and societal rights of others. Not only stupid, but a danger to themselves for….the likelihood is that, even being aware of how events turned out in February, they still thought they had the ‘right’ to do what they did, and probably for the sake of displaying themselves on social media. ‘Look how daring we are! Snigger, snigger, snigger’.

Once again there’s a comparison of apples with pears, in what I’ve said above, and how I act in SL. Yes, we do sometimes get models posing at sims which expressly request no nudity. We run the SL equivalent of being banged-up in a Malaysian prison, being barred from a sim. We continue to do it and haven’t been barred (yet) from any sims because we ensure we are careful not to take photos when others are around, in case we do cause offence.

Still, the possibility exists that a sim owner could read about their sim being used in such a manner and determine to bar us from the sim without catching us taking nude photographs in real time. It’s the chance we take.

Are we being hypocritical? Are we acting in a manner that, in a pixel sense, replicates the actions of semi-nude tourists? Probably. Thankfully, though, the occasions where we do have to move from SL’s naturist or ‘adult’ locations (where nudity can be expected) is rare.

Edited to add. Apparently this is a ‘thing’.  There’s even a website, ‘Naked at Monuments’, with the usual accompanying Facebook page, that marks various sites in terms of difficulty to be nude at.