Rather than my usual unkempt mop of hair, I sometimes make an effort when going out and I do like to try and sport a slicked-back style.

On my travels I discovered a Uw:st group gift which offers just that look. Quite unique in SL hairstyling, don’t you think? 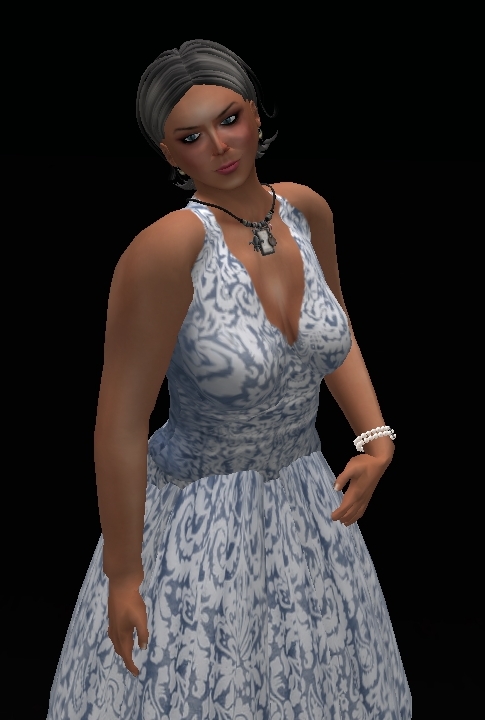 A hairstyle probably best served to a fancy dinner dance, I think, but one I’ve also modelled in an SLN style too. 🙂 To my mind, it’s a style that very much suits older women who’ve almost inevitably gone for shorter hair as they pass through life. When hair is short, there’s a little limitation as to what can be done with it to give it a ‘glam’ look, but this is one of those styles.

While Ella’s holiday may be behind her, I’ve still got mine to look forward to, so I’ve been assembling this year’s wardrobe, in and out of SL.

One thing I have packed is a pair of light, airy pants, something I prefer as evening wear over sundresses. Something similar can be found (L$0) at Sweet Temptations.

A gorgeous pair of voluminous pants, which is paired with a denim jacket. I wouldn’t be taking a denim jacket on holiday, so I lost that 🙂 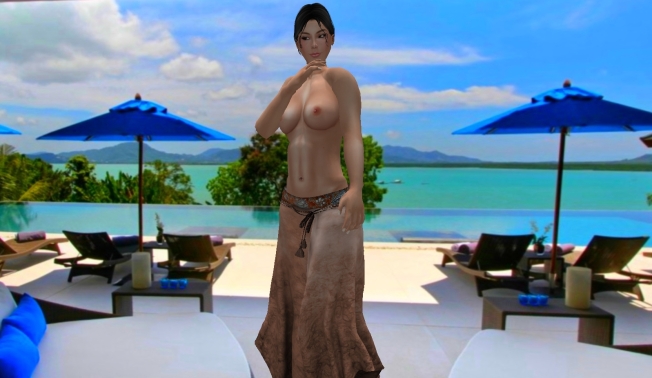 In real life I’d be trying to match it with an equally oversized top, kaftan-like, for wear to and from the beach, should the mood strike me. I have to say that I do have an advantage over Ella in that my self-contained naturist destination has an on-site supermarket so it’s possible to wander down there, or to the beach, without having to dress so 24/7 naturism is possible (and I’ve lived that before, going five days without having anything on, until we decided to take a bus trip to a nearby historical site).

While at Sweet Temptations I discovered they also had dance animations, free, which I also picked up (but which photos don’t do justice) as well as a free male AO. Even though it’s ostensibly for a male, I found it worked quite well on my avatar too.

Just a couple of weeks until I go, wifi is debatable in the chalet, so my contributions may be limited. 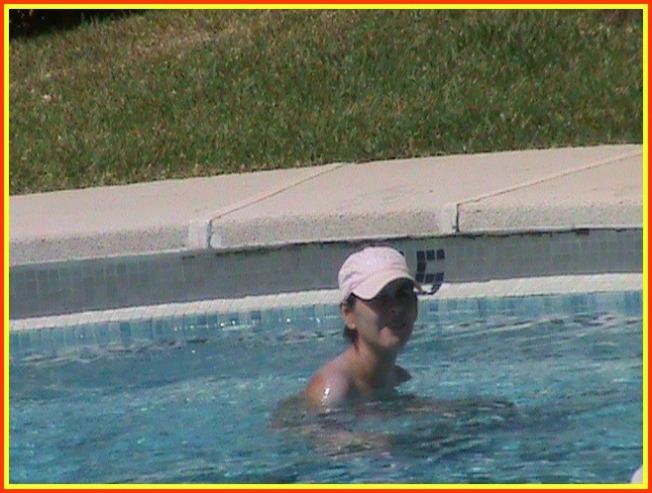 I think it was established last week that, yes, I do like to use a baseball cap as my preferred method of keeping the sun out of my eyes and off the top of my head when on holiday. In the pool, shading my eyes has additional advantages in that I can see the blurry shape of other swimmers. Without my glasses I’m almost in guide-dog territory, and anything that can identify that there is someone else swimming near me is enormously helpful. Half-blind, and squinting into the sun reflecting off the water, we’re looking at me swimming into other people. The baseball cap assists a little. I can identify people shapes. 🙂

When I got home I realised I didn’t own a baseball cap in SL, so I’ve rectified that.

I also picked up the straw hat from Amiable that Pookes blogged last week.

It’s not any use to me in the pool, but will still keep the sun off the top of my head. And this is a point I can’t stress too highly. The sun can be very strong, not just in sun-sea-sand destinations. Even a hot sunny day in your typical northern European or US/Canadian border town can be damaging at this time of year, so if you’re out in it, factor appropriately and cover your head. Sun stroke and heat exhaustion can be dangerous. Spanish radio was reporting last week that even Spanish citizens, more used to the heat than I, were collapsing in the streets as temperatures reached 40 degrees. Cases of skin cancer are rising, so it’s clear what long-term exposure to the sun can do. Be careful out there and enjoy your holiday, wherever you’re going.

Back from holiday, the main problem is a lack of motivation to do anything (other than wash the few clothes required for a naturist holiday). I’m going through a large number of photos, and I’ve popped in world to see what’s going on.

Summerfest is still on, and now that the crowds have substantially thinned, the lag-hell it was two weeks back is no longer an issue. I didn’t buy anything, my holiday is over and I’m not thinking even of SL summer related accessories, but I did spot these flamingoes spotted around the event, which captured my eye because we did actually see flamingoes in the wild while we were away. 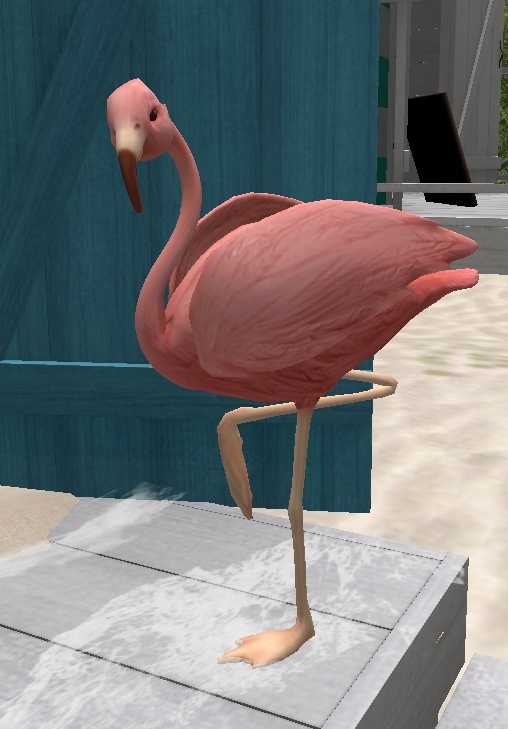 I’ve seen flamingoes before, in zoos, but it was special to see them in the wild. Apparently they are prevalent at the Cabo de Gata national park, about 80 miles from where we were staying, so it rather appears they’re spreading out from there, or use the area where we saw them as feeding grounds or…whatever. I don’t know, I’m not that knowledgeable about wildlife.

After that, I tp’ed around some of the naturist sims and landed in Eden in a lovely dawn light, very much like the sunrises Sylvia and I experienced last week.

So I decided to take a photo of that in our usual ‘SL replicates RL’ sort of way.

After that, I’ve had a poke around the blog sites I’ve got bookmarked, and catch up with what my blogging pals have been doing & saying this past two weeks. It’s going to take me a few days to get back up to SL blogging speed, I’m afraid.