Should you have the misfortune to run into me in Second Life, you’ll find out very quickly that I’m chatty, and instigate conversations rather than simply sitting back. I’ve been out and about in some of the naturist sims recently, stopping and saying hello to several of the avatars I’ve met.

While I’ve undertaken several naturist holidays in real life, naturist sims haven’t been somewhere I’ve particularly gravitated towards in Second Life for the reason that I’ve always found much more to do than just exist around naturist sims.

I do like to dance. I can just as readily be found at a sim like Frank’s Elite Jazz as I can at a naturist sim -until recently. Yes, if there was some sort of well populated dance at a naturist sim, I would certainly attend and have no problems getting stripped down to my pixel birthday suit. Equally, I would also be found shopping for new, exciting ball gowns to wear at Frank’s.

I guess that’s going to change a bit now that I’ve taken on my new role. 🙂

While on my travels I ran into male naturist avatar Malachi at Blue Lagoon, and I got chatting. Malachi admitted to me that he was barely aware of naturism when he joined Second Life. ‘Sure, I knew of nude beaches, but as a community and lifestyle, no. I had no idea’.

Being introduced to a naturist location by a girlfriend, he admits it ‘seemed weird’ taking his clothes off in a social setting, even in Second Life. ‘I suppose it’s like real life. Taking my clothes off in my apartment with Second Life girlfriends is OK but outdoors in a public sim was strange. But I liked the social element of it. So I became a Second Life naturist.’

A year later, he was so consumed by the idea of the naturist lifestyle that he embarked on a naturist holiday. ‘My girlfriend then wasn’t so keen. We finished with each other because I got drawn into real world naturism. Second Life made me a naturist, hahaha! Fortunately my new girlfriend is much more accepting of naturism and seems to enjoy it as much as I do. We’ve been on several naturist holidays together.’ 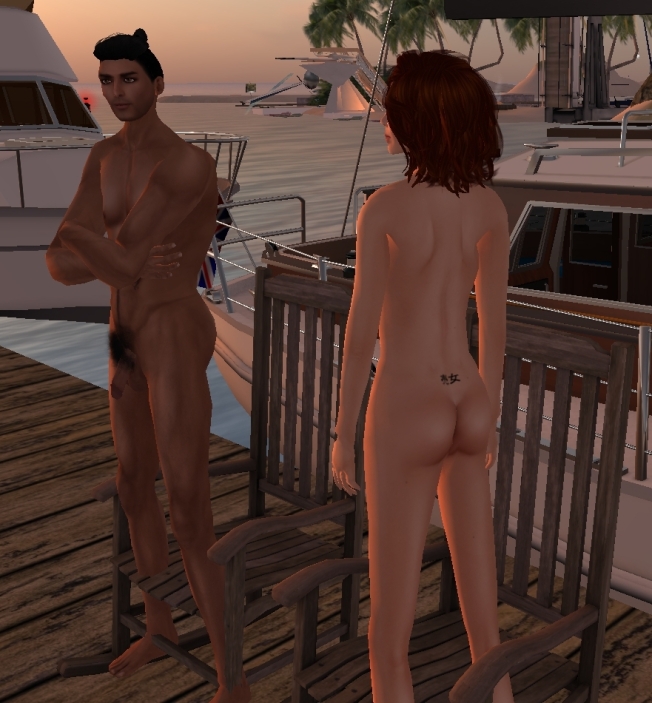 Malachi and Trine at Blue Lagoon