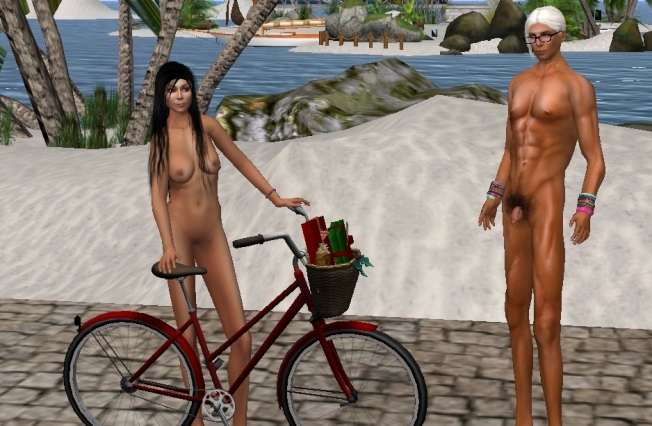 Apparently, Howie holds a ‘Christmas party’ at his SL home each year. In reality, this takes place over several days as not everyone is online at the same time of day, or even the same day., and the event has previously been photographed for SL Naturist. Plans are already underway for this year’s party, and it appears there will be a ‘Photo Special’ on SL Naturist this year, published on Christmas Eve. Howie invites all of his naturist friends, and apparently it’s legendary for a bit of SL ‘networking’ with new SL friendships often made.

In advance of it, model Malgorzata has turned up on her bike, laden with presents to put under the tree which has just gone up.

This three pose Christmas bike set is available on the Marketplace for L$50.

While much of the grid is now covered in a blanket of snow, the nice thing about living in a naturist paradise like the Eden Naturist Estate is that the sun shines all the year round, and it’s warm enough to pursue the naturist lifestyle.

Presents delivered, Howie helps Malgorzata set them under the tree

Thanks to the Fab Free blog for highlighting this pose set.

One thought on “Some presents arrive by bike, rather than reindeer”