Lollygagger Lane Art gallery has an exhibition on right now, featuring a photo series by avatar Fanny Vermont. It, and her photographs on Flickr, are exceptional and we strongly recommend a visit to the exhibition itself (on until the 9th of January, 2016), or Fanny’s Flickr page.

We’re trying to make contact with Fanny right now, in the hope she can provide some background to the exhibition, as well as some further info about herself and her Second Life hopes and aspirations.

Anyone using Google today (at least, in the UK, I know the google doodle is sometimes themed by region) will have seen homage to BKS Iyengar, whose 97th birthday it is today. Who is he? Probably the greatest living ‘father of yoga’.

In parts of the world naked yoga is practiced and is growing in popularity in the west, although its practice has been known since Greek times in western society and the word ‘gymnosophy’ is linked to naked yoga masters.

Disappointingly, nude yoga as portrayed on the internet sometimes feels as if it has less to do with gymnosophy and more to do with gynaecology.

As a yoga practitioner myself who attends weekly (clothed) classes and who is very much a rank amateur at it, I have to say that it does provide a tremendous sense of well-being, and yes, I’ve practiced it nude at home.

There are many, many locations in Second Life where yoga may be practiced (some of them allowing nude yoga, such as Eden Naturopolis’ outdoor gym). 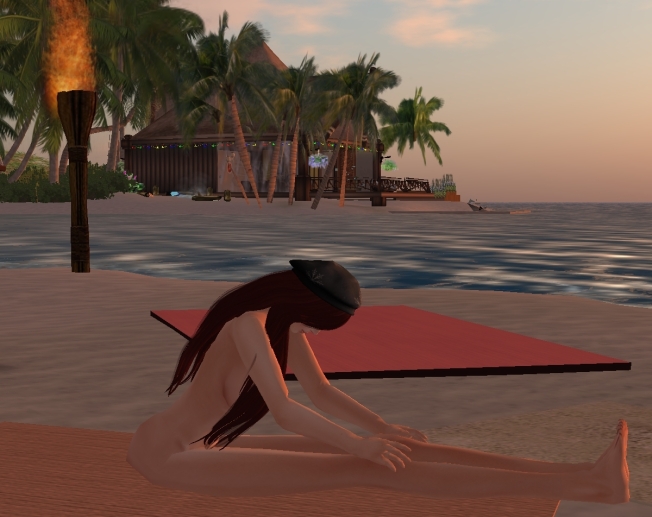 I also took the opportunity to do some yoga at Brahma Yoga Meditation Ashram (although I’d warn that while I went nude, I can’t vouchsafe that it’s naturist friendly, so proceed with caution: I only go nude in places where there may be some doubt about it when no one else is around).

Note: I’ve set the LM to Eden directly at the yoga mats, so try not to land on someone when teleporting in 😉 I should also add that the ‘new hairstyle’ is an Xmas gift from Truth Hair for all group members – it comes complete with beret and a HUD to alter it to your colour of choice. I’ve set it to my usual deep red colour, which you may call ‘African Sunset’ or ‘Titian Red’.