There are well documented health benefits to sleeping nude.

But if you are one of the (admittedly overwhelming majority of) people who wear something in bed, Facepalm have gifts for you.

Wearing both the female and male gifts

The female gift (panties included as part of the mesh outfit)

Wearing the male gift on its own 😉

Of course, here at SL Naturist, we recommend you embrace the skin you’re in!

I’m Silje, whose avatar was created as Silje Krokus almost seven (!!!!!) years ago. Later this month (2th) you can celebrate my rezz day with me 🙂 Flowers are always welcome. Along the way we have adopted the names Silje van der Krokus and Jonny van der Mongrain to give a little idea of where we exist in this real and virtual worlds. And also because our real life names have the ‘van’ in them.

First I shall tell you a little bit about myself, both real life and Second Life.

I discovered Second Life just after I had reached the milestone of 50 years, and played avidly for maybe three years. I formed a Second Life group called ‘Over 50’ which was intended to highlight events, clothes and things that were suitable to the Over 50s. So dances with The Beatles and The Stones music was in, modern dance music out. The group worked well for a while (it still exists, join if you feel like it!). I would send group messages out to ladies about what clothes were available to people of our age. I started exploring an ‘older’ looking avatar with some passion. My husband Jonny (created as Jonny Mongrain) joined me in SL about a month later and we had a lot of fun, together and alone, exploring this new world.

About two years ago we stopped playing. Not because we were bored with it, but because of a life event.

We were both teachers of English in schools in Belgium (we met when both employed in our first job in the same school 30 years ago) and both starting to get close to retirement age. Retirement age for teachers. After 55 you get encouraged to take early retirement and maybe get offered a good pension package. We both decided we should retire, as our youngest child had just moved out of the family home. We sold our large house, moved into a smaller apartment, bought two motorcycles, took our pensions and took to the roads of Europe for a summer. When the weather turned a little bit colder we returned home, bought a hippie van and took to the roads again until almost wintertime!

Not quite this paintwork, but this style of van!

Second Life wasn’t possible on the road, so we lost the habit. I opened up the ‘Over 50’ group for anyone to post on, and they did! 🙂

In Second Life we did discover nude beaches and made some friends there in Second Life but my Second Life was as occasional nudist. On our trips we discovered naturism in the real world. For sure, we had maybe visited a nude beach on holidays in the past and joined in 😉 but now we stayed at campsites living the nude life for a week or more at a time rather than just an afternoon. We loved it and became committed naturists in real life maybe two years ago. Now, our trips are based around naturist campsites exclusively, mostly in France. We will return to the road and naturism in the spring, and I shall maybe report on these trips?

At home, in winter, I discovered this blog by the accident. I loved it. The mix of real life and Second Life and all a celebration of our naked selves. I became an avid reader of SL Naturist when at home and I could play Second Life (Please note, there is wi-fi in naturist camps, but if we travel by bike and camp in our tent things like a computer is considered non-essential to pack. First priority is a phone to make contact with family and collect emails. All other computer work is non-essential).

Jonny on his Electra-Glide in Second Life. 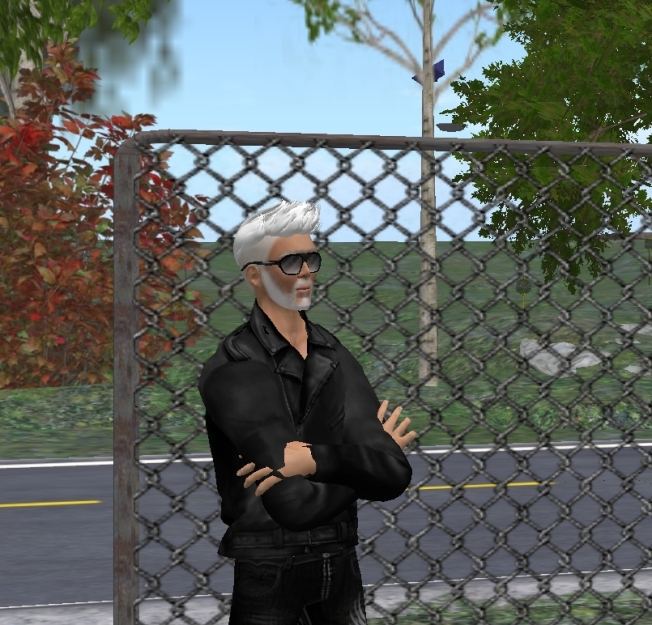 I should make it clear we don’t own bikes in Second Life, because there is not a big enough sim to create the feeling of the open road for us. For me, I would want a sim the size of Arizona, lol! 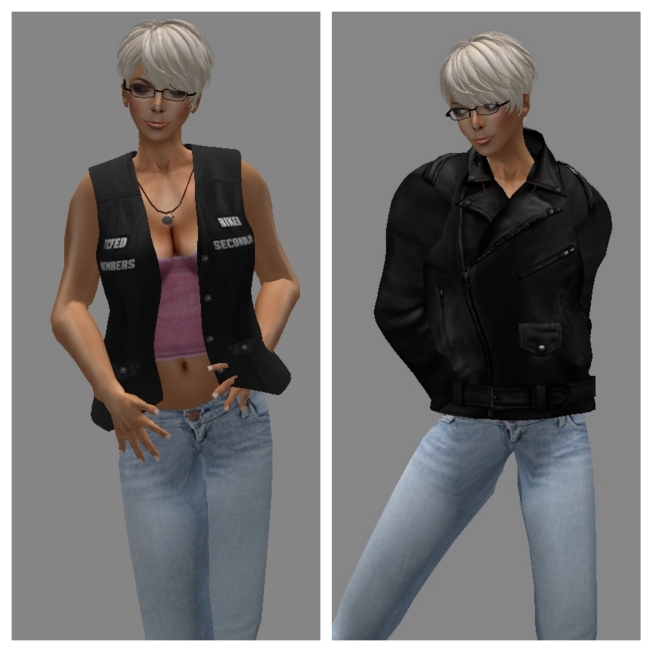 Me, dressed for the open road 🙂

OK. So that is us in real life. What will I bring to Second Life Naturist?

The danger is to focus on clothes, which is the opposite of what SL Naturist is about. I do like clothes that suit an older looking avatar, and I will not make apologies for sometimes making older avatars aware of clothes that suit them well. Also for hair and skins, particularly skins. But more than this I wish to bring a feel of the older naturist attitude to SL Naturist. There are many older naturists in real life, because they have been so for decades or because like Jonny and me they came late to it and are now disciples. As people get older and less shapely, maybe, the contrary thing is they grow more in confidence of being nude. They realise no one cares about how they look. They are themselves and content. And this is a beautiful thing because all bodies are beautiful. However, as I say the ‘danger’ is to focus on clothes, it’s also going to be something that defines us, an older looking avatar. And so, yes, I will blog about age suitable clothes, but always within a post on which there is some naturist emphasis, I think. The clothes thing will just be a little additional thing. Skins and hair will be a main focus, and I would wish for Jonny to tidy up a little 😉 (so much in Second Life is like real life, yes girls? 😉 )

For example, just today I have been searching the sims of Second Life for age appropriate clothing and I have, from left to right, a Little Black Dress from Modanna, a nice cocktail dress from Sweet Temptations, and Christmas lingerie from Sass. All are free/Group Gifts right now. No linden dollars need be spent. And while the christmas lingerie looks Christmasy with the cropped brassiere top, without it it is the perfect slip to wear on a clothing optional beach 😉

I wish to convey this all in SL Naturist.

It is a fact. Avatars are now adopting older avatar skins in greater number. I see them all the time. Good looking older guys, in particular, maybe more than beautiful older women. I wish to make the guys aware of the older skins and get Jonny to model. And I should maybe wear the older female skins to give confidence to others to wear them, be themselves, be beautiful even if there are many candles on the cake! 🙂

This is my dream and my role in SL Naturist. I hope to speak soon to you and continue our friendship.

Source: Why Some Parents are Afraid of Bare-Chestedness