Meet Stephen Gough, Britain’s ‘Naked Rambler’. SL Naturist has covered his story before, and he essentially has now spent several years in prison for refusing to wear clothes, being re-arrested every time he leaves prison and refuses to dress, with various police forces in the UK then locking him up again immediately.

Accompanied by his then girlfriend Melanie Roberts

The British press have often taken a critical view of the law’s stance, due to the costs of taking him to court and keeping him in jail. 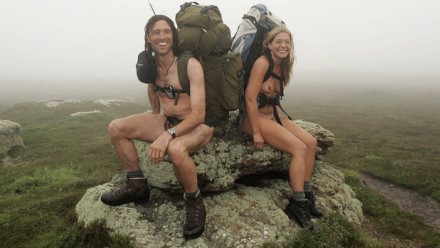 He divides opinion in the naturist community, with some saying that he is the vanguard of those who seek to make nudity a legitimate form of public ‘dress’, while others claim he sets the naturist movement back several years and is seen as ‘a bit of a nutter’. Either way, it can’t be right that he keeps getting locked up, and I’d hazard a guess that there must be a more sensible solution than the current one of returning him to prison. He’s not in the news at the moment, but…

…’inspired’ by Stephen Gough, avatar Jimmy has decided to become SL’s own Naked Rambler. Wearing hiking boots, a hat, a backpack and nothing else, Jimmy has embarked on a year long (!) trek around the sims of SL naked.

As he says in a notecard for anyone who challenges him :-

I’d ask you to read the story about the UK’s Naked Rambler, Stephen Gough, locked up continually for choosing not to wear clothes.

In Second Life, there is a similar situation wherein we are asked to dress in a ‘no nudity’ sim, as if the naked body is something to be afraid of. It’s not. It’s natural. It seems we carry our fears and learned ‘taboos’ from real life into Second Life.

Bloggers insist on ‘no naughty bits’ in photos while offering clothes that accentuate female sexuality. Low cleavage, high cut panties. Skin designers self-censor their products in their own freakin’ stores! Nipples and the crotch areas usually blacked out. It’s madness.

And so in a one-man support for Stephen Gough, and the hope that I can walk the sims of Second Life without challenge, I’ve set off on a year-long trek around the world we inhabit, and I’ll be blogging reactions to my nudity, taking photos on my travels and recording the sometimes idiotic and hypocritical stance taken by many avatars who bring their own real life hang ups into the game.

Jimmy tells us ‘I’m not trying to offend anyone, just like Stephen Gough, but I’m trying to highlight the ridiculous element of the way many bloggers and designers have this hypocritical and nonsensical attitude to nudity. I’ll be tp-ing into sims, probably photogenic ones where the photos might look good, and walking. No running, no flying. I tp out again when I’ve exhausted the sim or run out of land. I’m working with the maps set to off, so basically I’ve no idea if I’m headed towards another avatar or not. If challenged, I’m offering my notecard to highlight the situation. We should not be extending body-phobia from real life into Second Life. In a sense it’s a challenge to people’s body phobias, the same as Stephen Gough’s. I won’t get locked up, but I may get slung out of a sim or barred from it. It’ll be interesting. A year seems a long time but I’m an irregular SL player, maybe doing a few days in a row followed by two or three weeks not logging in, so it’s not like I’ll be tramping around the grid for a couple of hours each night for 365 days!’

We wish Jimmy well, and we’ve asked for regular updates on his travels.