I decided to make it my quest to locate good quality black skins (I’ll repeat the experiment for Asian skins in due course) with a maximum spend of L$300. I know that this might be beyond the pocket of some avatars as it is, but my reasoning was that 7 Deadly Skins, which offer a monthly free gift, have a maximum group join fee of L$300 for their group gifts, so in a sense it could be expected that white avatars would make that spend, so it’s not unreasonable to suggest this as an outlay for decent work.

In this research, I’m being joined by model Nadifa, who is African-American, and who is assisting in leading me through the pitfalls of buying.

‘The first thing you need to understand is that, by ‘black’, we can have many different skin tones, from the darkest skin through to lighter tones. I’m dark skinned myself, and so my avatar is reflective of this. However, due to the limitations of the viewer or monitor, the darkest skin tones sometimes don’t work, no matter how you might wish them to do so’.

Nadifa’s regular skin is by Izzie’s, a shop still operational in SL, and it was a hunt gift that she says ‘suited and never much saw need to change’.

I’ve used the same photo twice. The top one is as it appears on-screen, so you can see what Nadifa means about it being ‘too dark’ for the SL viewer/monitor, and the lower one has been lightened a little in Picasa to draw out the detail.

Nice….but can we find Nadifa a skin she might admire and use daily, for less than L$300?

Have we hit pay dirt on our first step, Journee? 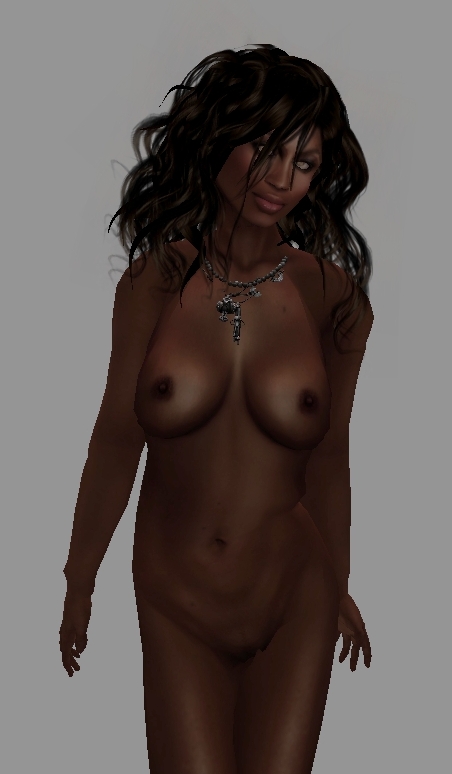 Nadine thought so, particularly as our L$289 also provided her with an outfit (now shown), a necklace (shown), new flexi hair, and a new AO she got particular excited about, besides her enthusiasm for the skin. Her only gripe was that we couldn’t find demo versions of the skins in order to do a comparison with her existing skin. ‘I might have gone a shade lighter, more to cope with the SL viewer/monitor than to be a paler shade of black’, she said, ‘but all in all I’m very pleased with this skin. The hair and the AO are also an unexpected bonus!’.

We tried loads of stores thereafter, but the only one where we discovered anything worth picking up was at LAQ (see below), which is a free group gift in its darkest shade (LAQ appear to label them, 1.5, 2.0, 2.5 etc…so this…4.0 or 4.5…is the darkest tone.

Nadifa liked it even though it was lighter than she’s used to, or lighter than her actual skin tone ‘but looked well on the viewer. I’m still properly black, but not lost in the limitations of a monitor screen’.

Indeed, we tried demos in prices ranging from L$500 to L$1500, but Nadifa came back to the LAQ or Journee ones time and time again. ‘Journee is more realistic for me, LAQ maybe plays better on the screen’ was her conclusion. We pondered over one specific skin at L$600 for ages (I won’t mention the store’s name) and Nadifa said the nipples on it ‘looked more realistic than LAQ’s, from a personal perspective, but definitely not worth paying L$600 for’.

As things stood, then, she had spent less than L$300 to get a new skin, and decided that even though she loved the hair that came with the Journee set, she would like to look for hair ‘suitable for a black avatar…cornrows, braids or something. It’s not my personal style, again, but it’s something I’d like to explore just to give me a specific sort of look I could use from time to time’.

One hair (discounted) at Emo:tions later… (see above) and Nadifa’s brand new look is complete. Almost…

The addition of one of the classy, free outfits at Designer Showcase gives Nadifa a look she wants. Professional, businesslike. Which is a good point to end this post, before moving on to Asian skins and male skins, because as Nadifa says, ‘where you do encounter black, female avatars it’s often in the context of being a hooker or a stripper at a club or in some urban sim. Which is also the way the media portray us, as a cliche. The idea is to present black womanhood more as Michelle Obama than some two dollar ho’, I think’.

And that’s where I’m going to pick it up next time. Donning a LAQ skin for my Trine ‘alt’, I’d like to examine if SL’s portrayal of black women is that: a two dollar ho’. Do we stereotype avatars? Are black avatars (run be black or white people) liable to be operated as pimps or hookers? By extension, perhaps we need to also examine if anyone running an ‘Arabic’ avatar is likely to be equally portrayed as a terrorist. Lots to think about and research.

And, staying true to our core ideals, I want to examine why black and Asian naturists are so thin on the ground in real life and the societal issues that may influence that.

(we’ll be picking up on this mini-series towards or even over the weekend.)

One thought on “Black Skins”