Over the years, there have been many articles that were written by Ella, Pookes and others but not published, and we have a huge repository of unused photographs as well.

There is also something of a ‘folklore’ about the fabled ‘SLN12’ magazine, an international edition Ella began and abandoned at least twice. I could probably assemble a version of SLN12 together from the archives if I so desired, but it’s not something on my radar right now, particularly as many of the locations and avatar accessories referenced are no longer available.

What I did find recently, though, was an article intended for SLN12 about India’s fabled naked Jain monks, Sadhu. 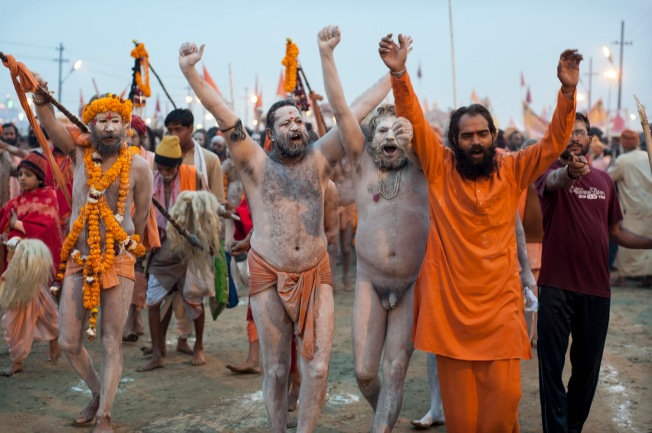 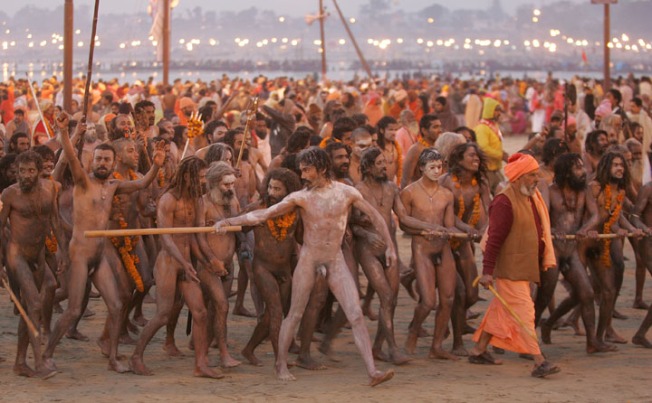 These holy men reject everything, including clothing, and despite India not necessarily being a hotbed of nude activity, these men wander at will and without threat of arrest for public nudity, as the population understands their religion.

Jainism also has its own ‘nuns’, or sadhvi, but by contrast it is forbidden that these ladies go naked. Instead, they wear a white robe and often have a little mouth cloth. 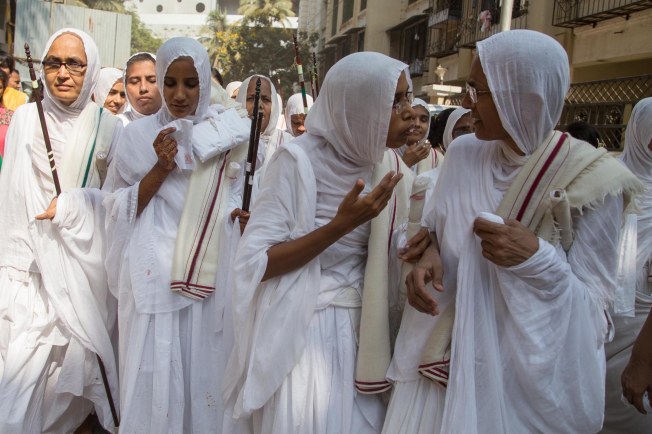 Other bloggers will put together ‘a look’ on a regular basis, and so I decided I should try to do the same. To this end, I asked two Indian avatars I know (they’re British born Indians, on the same time zone as me, but they generally live their Second lives with a ‘western’ approach to fashion) to fulfil the roles of the sadhu and sadhvi. Once I’d completed the look, I got Priyanka, my female model, to simply replicate the following instructions 🙂

On the Marketplace, I found a free (L$0) mesh sari from Auralia Fashions.

Originally red and gold, by changing the texture on it (I used the ‘white tile’ texture in inventory textures, although you could choose your own white texture), we moved from this, the original… 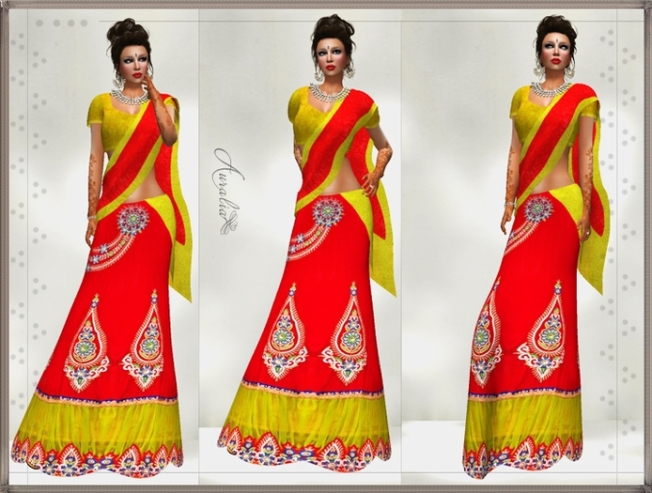 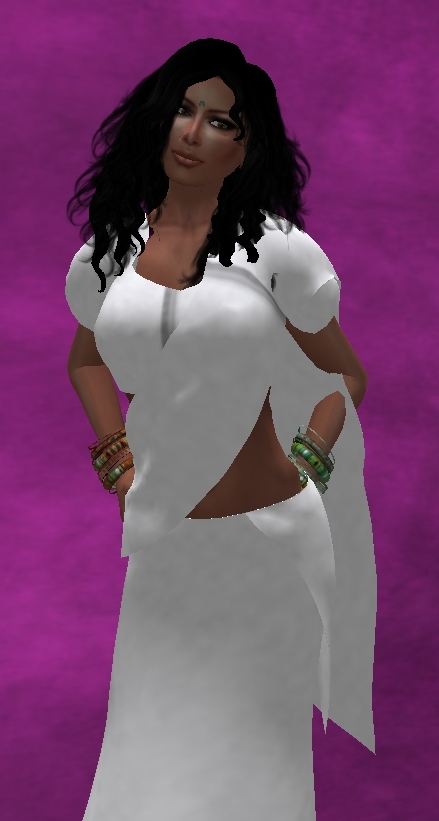 I also discovered a white (Islamic) hijab dollarbie on the Marketplace, so I bought that, and ended up with the following look…

Of course, a bare midriff isn’t an ideal Jain nun/sadhvi look, so I returned to the Marketplace to discover another dollarbie, another Islamic dress, more modest, from Harbiye Design.

Once again, changing the texture from the original black, to white, created a more realistic sadhvi look.

The ’tile’ effect of the texture produces lines on the sari I used, so maybe not ideal, but then I looked at the photo of real life sadhvis above and noticed that their clothing includes similarly styled scarves, presumably to indicate their particular order, so I thought the tile effect on the clothing could represent something similar. The glasses used in the last photograph, to give Priyanka a more studious look, are part of your inventory (Delilah mesh glasses).

In effect, then, this sadhvi look was created for one linden dollar…

Deepak, my male model, was of course much easier to recreate in SL. He just had to, in the main, take his clothes off! However if you look at several of the photos above, the priests are carrying a brush. The religion demands they hurt no living thing, so the brush is, apparently, to brush insects from their path, or from where they sit.

Deepak headed over to Plausible Body, on my instructions, where he bought…wait for it…a French Maid’s outfit!

I asked him to get this because it contains a feather duster. The feathers come as white but by using textures again, I was able to get him to change these until we reached a look that looked a little more accurate. We settled for a ‘dried mud’ texture in the end. 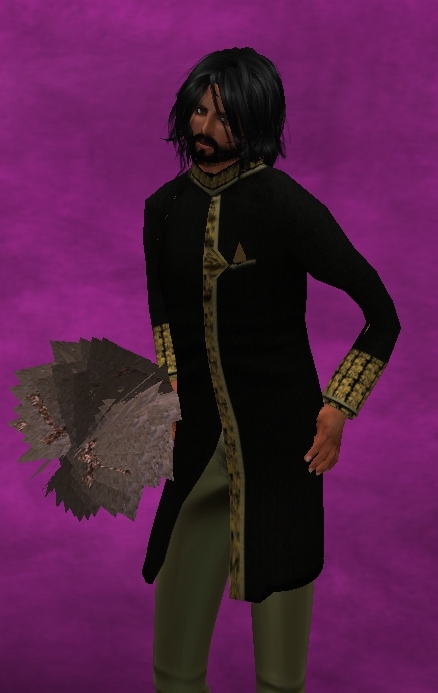 Incidentally, if you do wish to give a male avatar an Indian styling, utilising a ‘nehru’ styled coat as worn, Deepak told me he’d picked it up at Hayas (a shape previously unknown to me) as a free group gift (no join fee).

You’ll also notice in some of the photos above the priests are wearing garlands. So it was onto the Marketplace again to get Deepak a free Hawaiian costume. It was just a hunch that a ‘lei‘ would be included to replicate a garland of orange flowers.

Photographic evidence shows that some of the priests have shaved their heads, while others have long hair and beards. I’m unsure what the convention is here, but the long-haired, beard wearing Deepak was allowed to keep his hair.

Finally, it was over to Bhaktiville, and a Hare Krishna temple, where Deepak was able to get some free items, including a couple of animations. 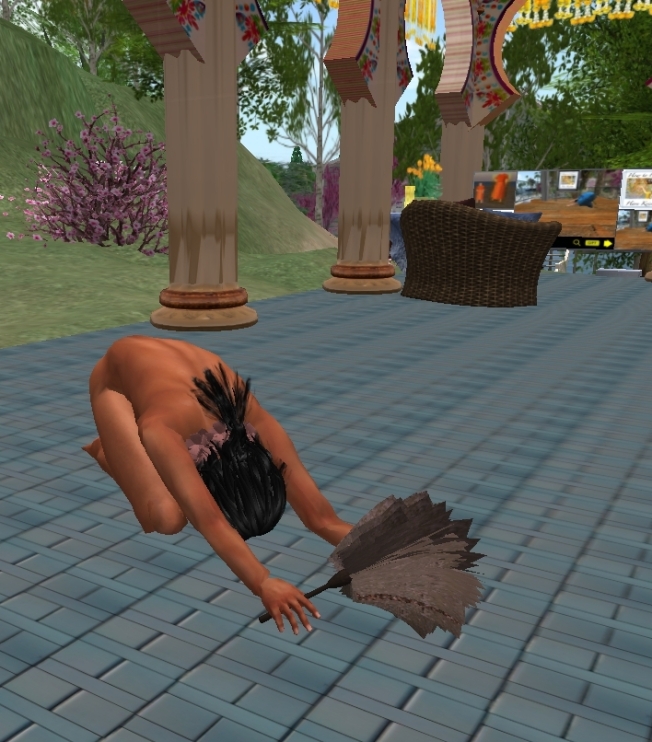 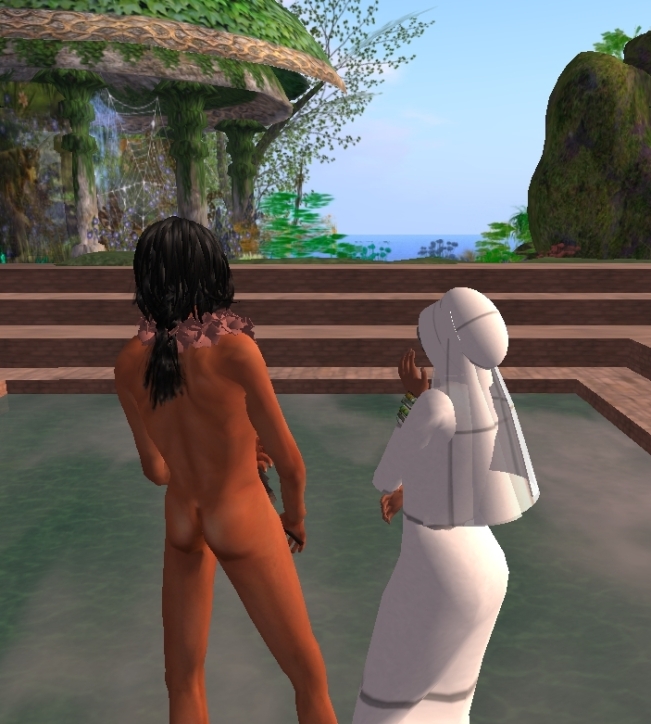 In the photos above, the Jain monks bathe in the Ganges. In this photo Deepak uses the Bhaktiville bathing ghat to replicate it.

In a rather moralistic Indian society, where nudity is generally frowned upon (despite a long history of depicting eroticism in its art) the nude, Jain priests are something of an anomaly, but nonetheless something worth examining in the context of nudity in society.

4 thoughts on “Nudity in Jainism”