There was a time when I would never have considered using photographs of myself when blogging. Last year, on the SL Naturist site, that changed.  The use of hats, soft focus, a bit of post-production, left me confident enough to allow my own photos to be used. With my face largely disguised, I even appear topless!

Granted, I’m not about to give you a full-frontal nude of myself, grinning widely (although, Lord knows, there are plenty of those in the home albums). But I’m more confident about my naturism in real life now.  How do we change attitudes to naturism unless we declare it, show it, express the beauty of it?

My husband is a much better photographer than I am, with a much better camera as well, and he captured these shots within the last hour of me by the pool while the children (cropped out) are in the water. They have all the necessary armbands on, and I’m standing guard…just in case either should get into difficulty.

Hopefully both shots demonstrate the beauty of family naturism and life as it should be lived. 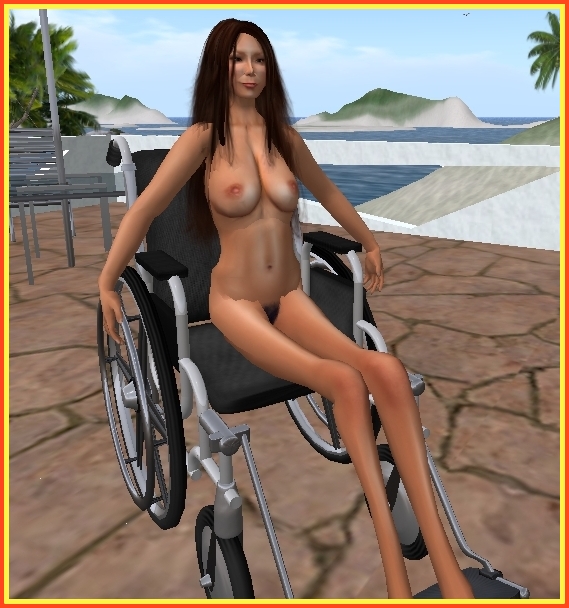 Where we holiday, there’s at least two wheelchair-bound naturists. We’ve noticed how the area has made huge strides in recent years to ensure that disabled naturists aren’t excluded, with ramps and other changes quite rightly being put in to ensure everyone can follow the lifestyle of their choice.

This morning I was talking to one poor lady who’d had an accident in recent weeks and is currently wheelchair bound. She can’t walk far, and her partner is having to wheel her around, but despite being wheelchair bound right now it isn’t spoiling her holiday.

Out to dinner last night, I noticed there’s a new shop opened this year selling ‘sexy’ clothing. This resort was always ‘family orientated’ but in recent years there has been a slight shift in its mood, one that has concerned some residents and holidaymakers alike. And that’s its ‘slide’ towards a Cap D’Agde type of market.

That does not mean people performing sex acts for others in sordid Cap D’Agde, simply that one or two places have opened up that changed the mood and theme of the place.

The first was a flamenco bar that became a ‘swingers’ club. I’ve never seen it open, apart from one time we were coming home from a spectacularly late dinner, but I guess it must attract an clientele as it has been around for 2-3 years now.

I’d also guess that the main body of its clientele are guests at the naturist hotel, but I wouldn’t have thought ‘swingers’ were so plentiful there as to create a viable custom.

There was also the incident when one of the urbanisations ended up with a ‘block booking’ (organised independently of the organisation) of ‘gay bears’, which also perturbed the more traditional naturists. I’ll develop this theme in a subsequent post.

This new shop selling ‘sexy’ clothing offers a selection of fishnet type clothing, and I did see one woman wearing a fishnet dress to the beach yesterday afternoon before taking it off to sunbathe, swim and then put it on again for her walk back to her apartment. In a naturist area, why bother? Why bother with fishnet at all? If you’re going to show yourself, show yourself. Why semi-hide it under fishnet, particularly in a naturist area?

As there are no purposes in which I’d wear a fishnet dress in Second Life, I’ve opted not to buy from the marketplace and replicate RL inside SL. But the very existence of the shop does, to me, indicate an ever so slight shift in attitudes here.