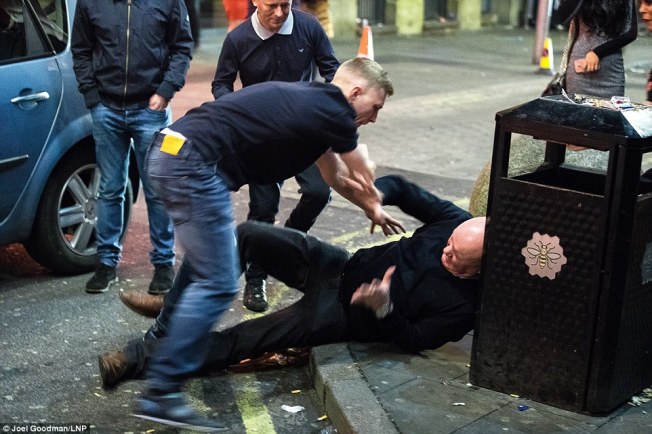 And we often wonder why the Accident & Emergency departments of our hospitals are so full on a Friday and Saturday evenings?

We can all have a drink. I seem to have somehow managed to polish off most of a bottle of white wine myself last night, the difference being that once I began to experience that little drunken ‘buzz’, I knew when to stop. There’s a difference between being merrily drunk and going too far.

You may have noticed we did a ‘set up’ photo tagged at the very end of a gallery of photos from the SLN Xmas BBQ. 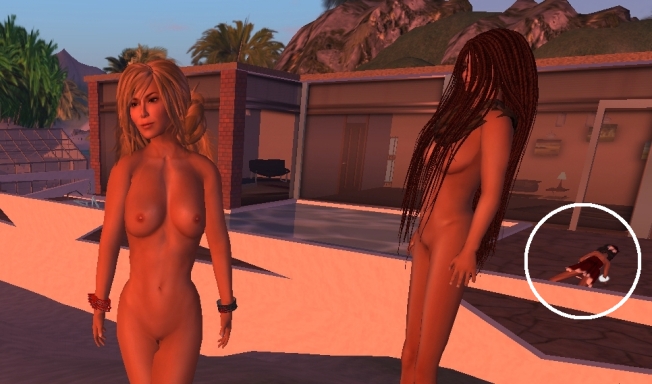 ‘Mrs Claus’, circled, is clearly drunk, courtesy of a ‘Drunk AO’ on the Marketplace (L$10).

Mrs. Claus, hat lost, one shoe missing and the other broken, is now vomiting at SLN HQ. 😦 courtesy of a ‘sickness AO’ (also on the MP priced at L$250)

Now separated from her friends, drunk, drugged or both (because someone slipped something into her drink when she was in the lavatory), phone battery dead, and no money to get a taxi -not that taxi drivers in the UK would contemplate stopping for someone so badly drunk- Mrs Claus has lurched into an alleyway in a part of town she doesn’t know.

I don’t want to over-egg the dangers. There are as many gentlemen out there as there are slimy, potential rapists. Some may do the right thing and pour you into a taxi and pay your fare out of the kindness of their hearts, but that’s rare. Indeed, in a modern day culture of date-rape, sexual assaults and not knowing when no means no -or even being falsely accused of rape due to their own, or the female’s incapacity- the chances are that the nice guys won’t want to get involved.

So where are you, or your friend, right now?

In some seedy lavatory/restroom, knickers half way around her ankles, (panties down pose on the MP at L$55) unsure where she is and certainly in no position for sexual consent. 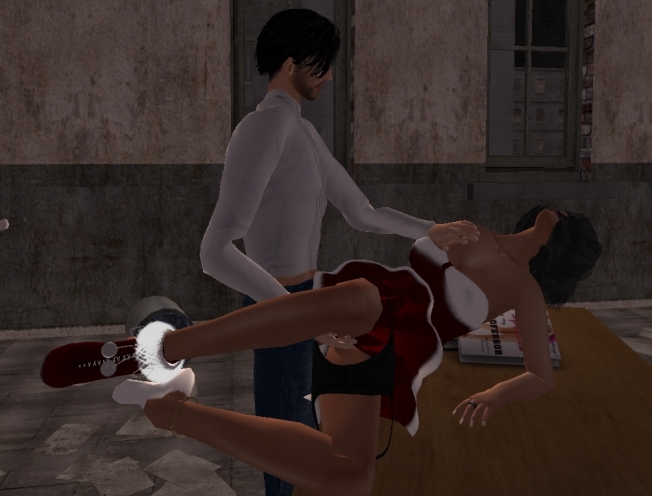 Not that any of this matters to the would-be rapist. He wants sex, and won’t care about consent. Because of excess alcohol you, or your friend, are now in serious danger! Indeed, you have been since you starting drinking beyond your limits.

These are not typical SLN photos. These are not our usual territory. But I make absolutely no excuse for setting them up, getting some of my SL friends to play the roles involved, or publishing them. There may inevitably be those who’ve had an opinion before (which I never asked for) about SLN straying from ‘genuine naturist’ content. I want to put over as strong a message as I possibly can this Christmas time about the dangers of excess alcohol, and the situations it can lead to. I make no apologies for this post whatsoever, and SLN doesn’t need anyone’s ‘approval’ for publishing this non-naturist post.

By all means have a great time, and include alcohol in your great time if you must, but follow simple ground rules.

Stay close to your friends, don’t get separated.

Always let someone know where you are and what (approximate) time you’ll be home.

Know your limits with alcohol. It’s possible to be ‘merry’, still know where you are and be aware of the potential dangers around you. I’ve copied and pasted the following from an Australian website.

When going to a party, there are a number of things you can do to ensure that you and your friends have an enjoyable and safe time. Many of these are linked to the safe and sensible consumption of alcohol. When too much alcohol is consumed, drunken behaviour can spoil a party.

Getting to and from the party safely

Look out for one another

Those rules appear like good, common sense for any party situation, anywhere around the world.

PLEASE STAY SAFE THIS CHRISTMAS. PLEASE BE IN A POSITION TO LOG INTO SL ON JANUARY 2nd, SAFE AND WELL.

Fortunately…for our victim of alcohol, and a sleaze ball prepared to take what the victim was in no position to consent to, there was a sort of happy ending…

Howie actually is that rare breed of gentleman who looks out for others (actually, as the man who bankrolled SLN for most of its existence, this appears to be as true in RL as it is in SL, his largesse has made SLN possible), and was concerned for his guest, Mrs. Claus. We saw him talking to her in a previous gallery about the SLN Xmas BBQ. (It’s actually weird seeing him in a clinch in the photo below, as he maintains very gentlemanly conduct in SL). 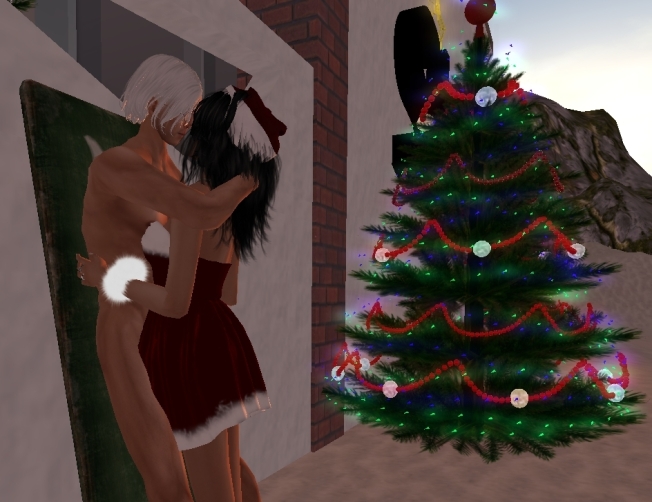 Following her, he happened to see she was in a desperate situation, and some pugilism (not something we support, incidentally, except in extreme situations) was required. Howie has drunk sensibly, has his wits about him, and manages to down our would-be rapist. (Fight pose, Marketplace, L$75)

Gathering up the victim of the sexual assault -happily he arrived before it turned into rape, although some countries rightly record sexual assaults as rape- he delivered her to a hospital and waited with her. 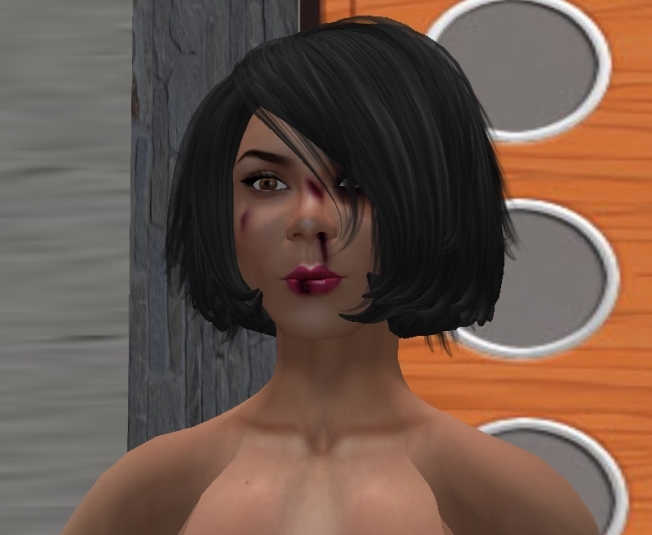 The bruises (Marketplace, L$50) will heal in a few weeks. The mental scars may last a lot longer, and affect the ‘lucky’ victim for many years.

For the would-be rapist…

…and it’s the best possible place for him, for a very long time.

My thanks to Howie for playing the role of post-party ‘hero’ (it was his actual party that initial photos were taken at, so asking him to play that role seemed obvious, and I think he rather enjoyed an elongated SL session after spending most of the past year out of SL), to Letitia for playing the role of victim (‘anything to highlight the dangers at this time of year and, come to that, any city centre any night of the week. As someone who has been in exactly the same situation as we’re placing my avatar in, the photo-essay resonates with me’), and for Jack who played the role of rapist, a role he was less than keen to associate with as it was something out of his sphere of SL knowledge (‘I don’t even do SL sex…I’d no idea these sort of places existed in SL…I’m a bit shocked and appalled, actually’). Apologies for the slight continuity error involved where Mrs. Claus’ hair at the party changes in the post-party scenario. Shorter hair in the subsequent events made for a clearer face so best to illustrate the dangers.

To conclude then…if there’s parties you’re going to attend in the run up to Christmas or the New Year, follow the rules and stay safe!