Yesterday was exceptionally mild, to the point where I was out at our bins (trash cans) in nothing more than a (long) T-shirt and bare feet. I could have undertaken these trips -so many bits of wrapping and packaging to grade for recycling- au naturel had I chosen to without being particularly cold.

Last night the temperature sank like a stone again, though, and snow and more high winds are forecast, although that’s all likely to be much further north than us as ‘Storm Conor’ sweeps in (I hate this recent phenomenon of naming winter storms. They’re just storms).

Boxing Day. For many, simply a return to more shopping. For others, a time to get out for a walk. Car parks at beauty spots will be full, riverside walks like rush hour in Oxford Street or Times Square as many of us seek to ‘walk off the turkey’, simply take some exercise as an aid to digestion. While we’re a family of cyclists, Boxing Day isn’t one for cycling as there’s simply too many people on the paths we might use to allow any continuity to it.

While it’s not snowing, as it is in the photos, I loved this set which Harry & I put together a couple of days ago at the Winter Flakes sim, as they’d certainly summon up the exact mood of Boxing Day had we had some snow (they also show a step up in quality each time Harry does photos, rather than my own ‘snapshots’ when photographing Second Life).

And it also gave me a chance to put on the female version of the coat I blogged a couple of days ago in its male version. It’s still available from American Bazaar, priced at L$0, with no group join fee.

For those of you shouting ‘hey! That’s not naturist!’ at your screen right now, you’re correct. But remember that naturists are sensible, logical people. We put appropriate clothing on at the appropriate moments just as readily as we divest ourselves of them in appropriate weather. Being a naturist doesn’t mean being foolhardy. Being a naturist means logically working through the idea that swimsuits are overpriced and unnecessary in almost every given situation.

Naturists are, of course, fun-loving people and we like nothing more than to run out into the snow, fully nude, if the opportunity presents itself. 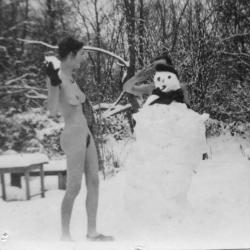 So…while we were over at the Winter Flakes sim… 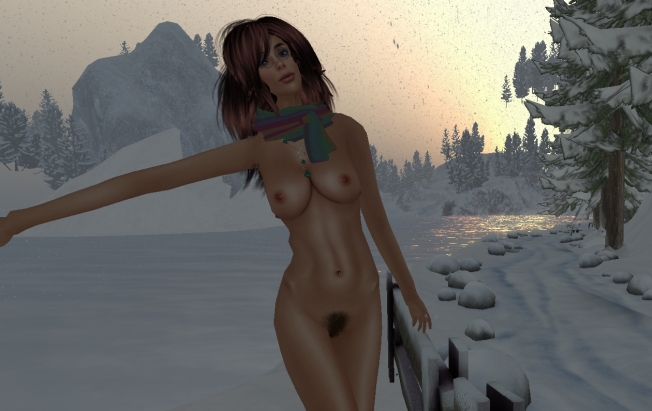 …why not avail of the beautiful morning light and show that being naked in the snow is a lot of fun, in real life as it is in Second Life, as well?

One thought on “Boxing Day”