Everywhere else in the world it’s New Year’s Eve, but in Scotland it’s Hogmanay.

It’s an excuse for even wilder drinking than the wild drinking Scots already are famous for overindulging in, quite often, and to my mind there’s a case to be made for the Scots being wilder drinkers than the Irish. 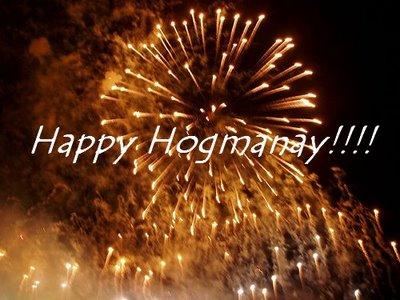 Not everyone overindulges, but many do. Some -even if they have been overindulging, and even if they’re still under the influence of alcohol- participate in a New Year’s Day swim.

With the Firth of Forth rail bridge (Edinburgh) in the background, Scotland’s New Year’s Day swimmers take to the water at Edinburgh

This year, Jim and I will have Granny looking after the children while we spend the night at a Hogmanay dinner in a castle not too far from home. While Burns Night has a very rigid menu (haggis, tatties and neeps) the Hogmanay menu is rather more flexible -with vegetarian options, not so readily available for Burns Night although this is changing with the introduction of vegetarian haggis.

Whiskey, of course, features on the agenda of Hogmanay (and Burns Night). I’m not an enthusiast and have previously voiced that view, on SL and in RL, something that drew a sharp intake of breath through gritted teeth from the assembled throng in RL. I am, after all, a Sassenach. Sometimes I feel I’m barely tolerated amongst Jim’s friends 😉 for daring to be an Anglo-Saxon blow-in.

When we got married, Jim adopted the full Scots regalia…kilt, sporran, even the sgian-dubh, a ceremonial dagger.

It’s not regalia he wears regularly, our wedding and Hogmanay dinners being the exception.

I also wear something of a Scottish style of tartan dress for the occasion. While I’ve not got any Scottish blood I know of, there’s a tartan for a clan whose name is quite similar to my own, and very similar to the one I bought on the Marketplace for L$199, more coincidence than me choosing one similar to that I wear on occasion in RL.

Jim’s outfit also came from the Marketplace for L$190. 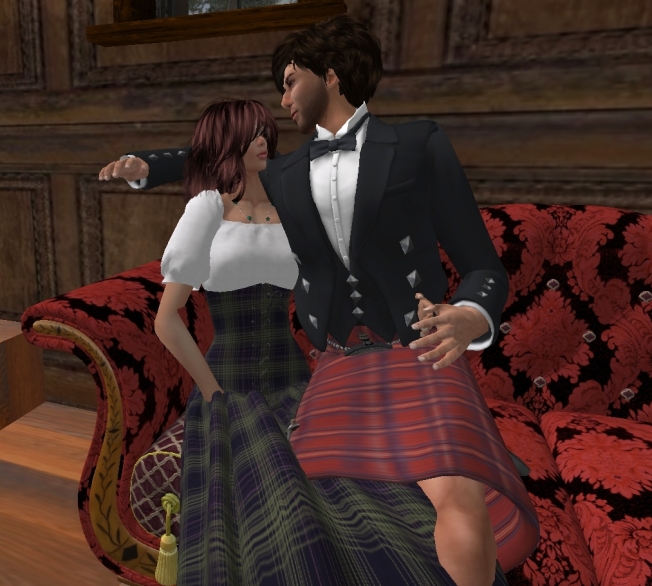 Jim and Ella celebrate another year.

I have to say that when a few Scotsmen and women get together for a bit of a party, and some highland dancing, the No True Scotsman fallacy is often in evidence.

This runs as follows…

Consider this in the context of kilts…

And just how true is that?

A survey found that 70% of Scotsmen ‘go commando’, wear nothing, under their kilts.

Imagine, if you will, several large, burly Scotsmen, slightly drunk (or more than slightly drunk),  taking to the dance floor in kilts, and performing, shall we say, with exuberance.

And when they sit down, they also tend to forget they’re in a kilt sometimes, as Queen Elizabeth can probably testify…

And yes, I can also testify…

What does Jim wear under his kilt? 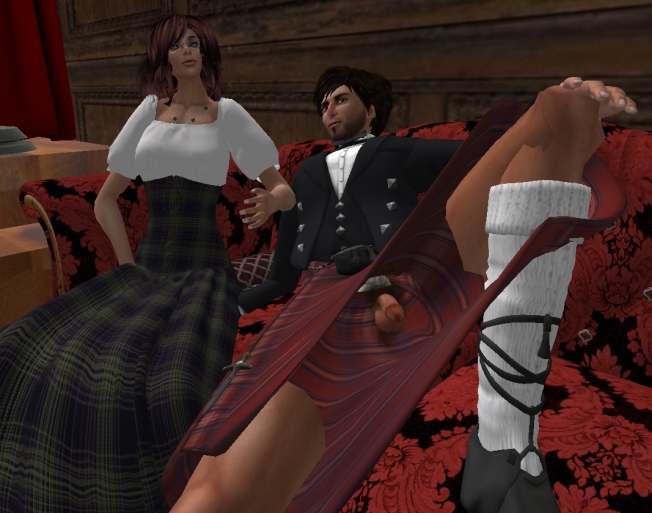 Nothing in worn under kilt…it’s all in perfect working order! :-O

Lucky, as a naturist, I’ve seen all of this before. and not easily shocked.

Listen, I love Scotland, its people and its culture, and even though I’ll always be a blow-in Sassenach, my children are firmly Scottish, given that the older two have learned Highland dancing at school, love the skirl of the pipes, my older son (London born, incidentally) loves his kilt and Scottish heritage and both have learned some Gaelic at school. I think we’re here to stay, and I, for one, am happy with the lovely lifestyle we lead away from the grime, noise and sardine-tin existence of London.

For all of the above, written with a slight twinkle in my eye, there’s a serious, naturist-related point, though. In the context of local cultures, there’s often a long tradition of semi or complete nudity. No policeman in Scotland is ever going to step in and arrest a kilt-wearing Scotsman for inadvertently ‘showing all’.

In aboriginal Australia, Polynesia and Swaziland (whose ‘reed dance’ for the King was covered in SLN on several occasions) nudity is part and parcel of local cultures, and accepted as such, even within a body phobic society. 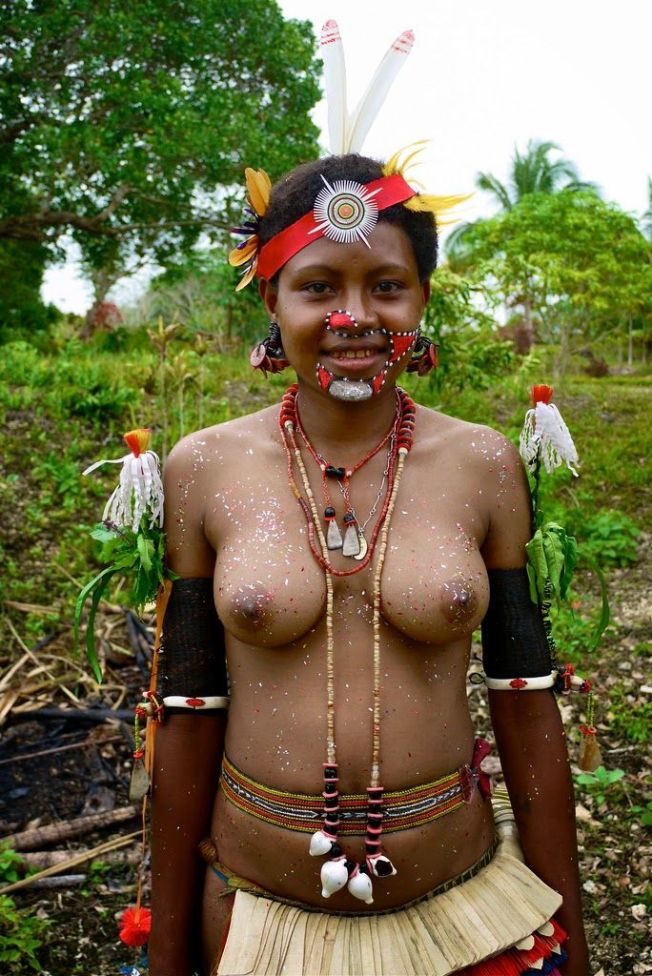 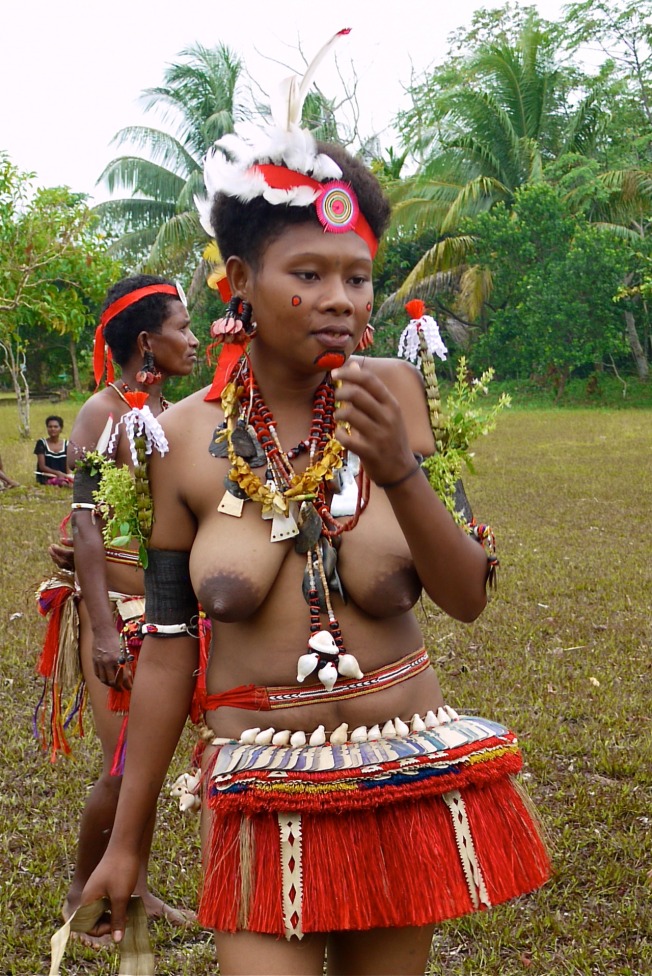 If we’re ‘broad minded’ enough to celebrate elements of nudity as part of expressions of culture, why aren’t we as broad minded when it comes to accepting that, for many, casual displays of nudity are part of the zeitgeist, and that the world has moved on from uptight Victorian values that still ripple across society? When will the time come when we accept that nude bathing is simply nude bathing, without connotations of exhibitionism? When will the time come when we accept that stripping off to swim in the sea is a tradition -a cultural tradition- as old as humanity, and that the sight of a penis, vagina or breasts is part of who we all are? When will the time come when we usher the ‘offence’ caused to a minuscule minority when faced with the unclothed human body away with a chuckle and advice to ‘grow up’?

No further posts today and conceivably tomorrow, given that we’ll be ushering the New Year in and dancing (with alcohol involved) until maybe 400am. I’ll see what tomorrow, and the beginning of another New Year, brings. In the meantime, wherever YOU are, stay safe tonight and all of us involved at SLN will speak to you again in 2017!

(Ella adds…much of this post was set up during the past week. Many SL Naturist posts are set up in advance…probably not a great revelation to many of you…days and sometimes weeks in advance.  It’s the nature of SL with avatars on/off/on the grid according to RL. So a bit of this was set up prior to my fall earlier this week. I’m fine, but I don’t imagine there’ll be much dancing later this evening. A bit of limping in the direction of the dance floor, and looking like a total Sassenach despite efforts to learn how to do Scottish dancing in recent months. Next year! I promise! Anyway, that’s another year over with SL Naturist. We’re back next year (i.e tomorrow) with further posts and I hope, your hangover permitting, you can join us in 2017. We -Jim and I- are off out for the evening, in Scottish regalia, but the dancing may be limited unless I gobble down a few more pain killers and a couple of drinks. (I’m not a huge drinker at the best of times, but I need a couple to get me on the dance floor -and maybe diminish the back pain…it’s getting better, honestly, since Wednesday but my lack of inhibition on a dance floor never leaves me, regardless of the quantity of alcohol involved). Anyway, whenever your New Year’s Eve started and finished in the context of SL -and it’s possible it’s not begun or finished by the time you read this- I hope it was great. Please, read the posts of the past week, about makeovers, naturism, confidence and anything else and take note. You can make 2017 in SL your best year yet. If you’re interested in naturism, in RL or in SL, and to varying degrees, note that we’ll be here throughout the new year to report on both SL & RL naturist events. Please, join us. Happy New Year! )