On the ‘About Us’ section of the blog, a correspondent writes…’Why do you pretend this is about fresh air and living in the Natural state. It is all about loads of on tap Sex for sex addicts. # So many liars snd fakers out there’

To which I have  (initially) responded…

That’s not an untypical response and yes, there are ‘naturists’ for whom the lifestyle is just that…an opportunity for sex. One or two real life locations do cater for that, such as Cap D’Agde in France and Hedonism in Jamaica. They aren’t, however, typical of the naturist lifestyle. They are an anomaly. I don’t need to ‘pretend’. For most naturists the lifestyle is about fresh air and living in the natural state, and the notion that it’s ‘on tap sex’ is risible. In some resorts the demographic is 50-70+. That’s not to say 50+ year olds aren’t capable of having, or enjoying sex (and not necessarily even with a life partner), but it’s laughable to suggest it’s ‘sex addicts’. Yes, there are liars and fakers out there, not so different from any other lifestyle grouping in society as a whole. The blog has a very clear agenda, and that’s to ignore the liars, fakers, sex addicts (in real life) who would seek to use naturism for their own ends, and promote it as it overwhelmingly is, a celebration of fresh air, living in a natural state, eating healthily, taking exercise and so on.

Does she seem sexually aroused? Or simply living life for the moment, without the encumbrance of unnecessary clothing?

Focussed on the game, not on her, and entirely unaroused by her naked form. Living life naturally? Or a ‘sex addict’? 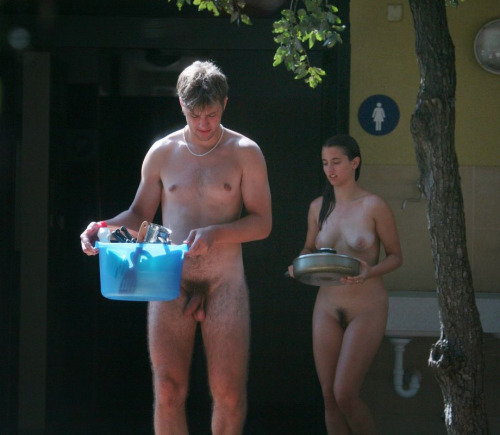 Washing dishes. Not exactly a situation that will lead to ‘on tap sex’.

Naturism is a family orientated lifestyle.

This ‘sex addict’ is clearly in the wrong place for ‘on tap sex’.

I won’t labour the point further than I have in the captions to the above photographs. I suspect we’re being trolled by liars and fakers, but in an increasingly conservative world it’s sometimes hard to tell. With ‘fake news‘ being the mot du jour, I suppose we’ve got to be aware of ‘fake replies’ to our blogging too.

Yes, the periphery of naturism, i.e. ‘naturist’ blogs and tumblr sites who only ever feature one gender in gynaecological poses or in various states of arousal certainly are authored by liars and fakers or resorts where group sex or wife-swapping are part of the agenda aren’t filled with liars and fakers who aren’t genuine naturists. The fact remains, though, that the overwhelming majority of naturism is about fresh air and living in a natural state without unnecessary clothing. Nothing more, nothing less.