My day begins early today with my usual trawl of the news websites. This is often ‘work related’, but occasionally a story involving nudity will catch my eye and work its way into the blog.

One story, widely reported in the UK media, involves a rather bizarre naked protest at Auschwitz, the former Nazi concentration camp in Poland, wherein they killed a sheep (!?!?) at the gates, then stripped naked and chained themselves together before the police were called and the protestors removed. 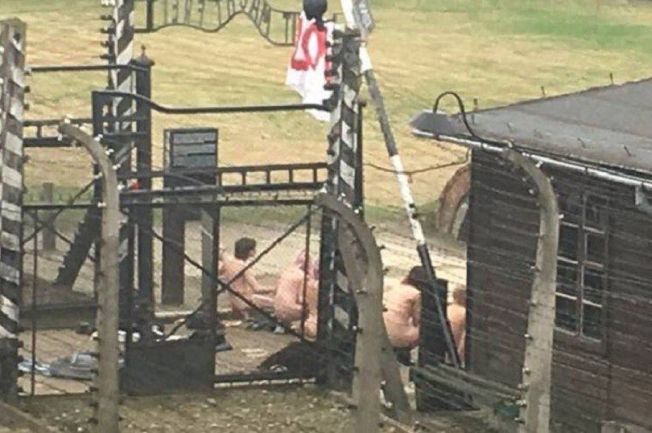 Unfortunately, the nature of ‘news’ is that it’s often not followed up, so it may be that we never hear the motivation behind this bizarre protest. Some media reports suggest it was in protest against conflict in the Ukraine, and while this is laudable, their choice of venue is not, besmirching the memory of so many people who were forcibly stripped in order to humiliate them when they arrived at Auschwitz, before going to their deaths. And killing a sheep? Naked protest still has a power to create media interest, and publicity, for causes around the world, but there are some places where it’s unacceptable. Auschwitz would be one such location where the memories of those who lost their lives to a horrible, screwed-up ideology needs to be preserved and protected.

1.1m died at Auschwitz, mostly Jews. It’s a harrowing place to visit. I’ve been and was rendered speechless just by the enormity of the hatred that took place there. It will be interesting to know if the 11 arrested, aged between 20-27, will be revealed to have the slightest comprehension of the enormity of history, and man’s inhumanity to man, that occurred there. Quite simply, an awful, ignorant way to protest.