Marcia, an SLN reader in Australia, writes to tell me that she and her husband live in the ‘outback‘. They enjoy getting out and about, and go kayaking on a nearby (250 miles???) river. ‘We get naked out there’, she says, ‘but would you say it’s proper naturism, given that it’s just the two of us and a couple of kangaroos for company?’

Yes. Of course it’s proper naturism. Naturism is a lot of fun in a social setting, but that doesn’t negate any naturist activity done alone, or as a couple.

Our models try to recreate kayaking in ‘the bush‘.

Your Australian setting reminded me of the movie ‘Walkabout‘, wherein a teenage girl and her brother are lifted stranded in the outback after their father drives them out there and then kills himself. The remainder of the story is their chancing upon an aboriginal boy, who is on a walkabout, a ritual that leads from childhood to manhood. In the film, there’s a nude swimming scene, seen as very risque at the time of the movie’s 1971 release. The girl was played by the then 19 year old Jenny Agutter, the native boy by  David Gulpilil.

Gulpilil would be almost fully nude for the entirety of the movie, Agutter being nude in a skinny dipping scene as the trio attempt to survive the harsh Australian outback. 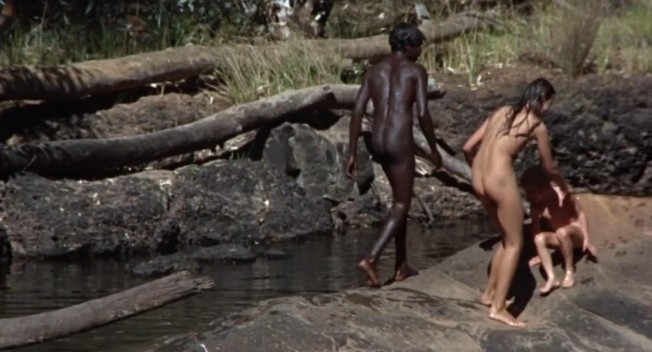 Replicating a scene in the Australian outback wasn’t quite achievable, but we did manage to capture a photo of a schoolgirl with a Masai warrior, once again demonstrating that most scenarios, however odd they seem, can almost certainly be achieved in SL.

The scene in the film can be described, to my mind, as a naturist one, and being naked in the great outdoors with your husband also very much qualifies as a naturist scenario. Enjoy your naked time in the wild!