Last October, Harry Leistone, our photographer, dreamed up a back story wherein a rock star, John Smith (you can’t get a more ‘everyman‘ name than that in English) had recorded a long playing record, a concept album and rock opera, called ‘Eden’.

In this ‘rock opera‘, the world, clothed since Adam and Eve ate the apple and suddenly knew they were naked (i.e The Book of Genesis in the Christian Bible), rediscovers its innocence and a sense of peace and harmony via naturism (or, at least, the non-sexualised naked state). Peace spreads across the world which becomes a huge Garden of Eden.

You’re with me so far?

Given the world we’ve inhabited since October, the election of Trump, the decision to press on with ‘Brexit’, a fracturing world punctuated with idiotic acts of mindless terrorism, the concept stands up quite well! Under our clothes, we’re all the same (one of two basic models) and, suitably unclothed, not so very far different from one another in our hopes, dreams, ambitions and aspirations. Peace might just reign, or be more achievable, if we were all naked, quite literally stripped of the uniforms of ‘power’ and need to subjugate one another.

Harry got some of our model friends to pose in roles, we took photos, I got to play a hippy, we mocked up covers to magazines and generally had a bit of fun -mostly clothed- in wearing some outlandish rock star/hippy clothes.

There was the publicity shots…

…and the subsequent breakdown by John Smith, his creative genius and mental capacity destroyed by his drive to complete the double album.

He moves to Morocco with his girlfriend, turns to drugs and subsequently has a spiritual rebirth and decides to live an ‘Eden’ life rather than write about it. Which is the hook we would hang a bit of SL naturism on. 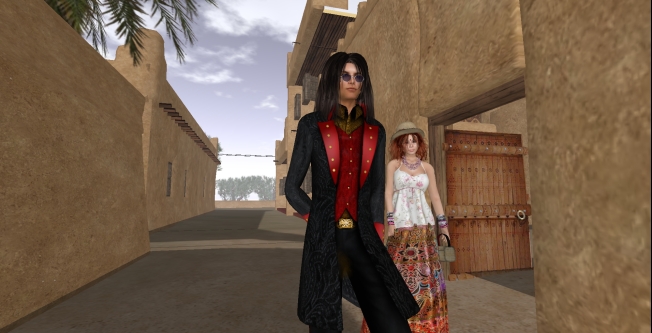 I’m not sure why we then abandoned the whole thing. Possibly the inability to make magazines look authentic. It certainly wasn’t ‘the concept’ itself, as daft and unhinged and wonderfully, deliciously mad as any rock opera or concept album ever issued. From the made up back story, we would move seamlessly to the real life sixties, Woodstock, for example (see the small b&w gallery below) when attitudes to social, communal nudity were changing fast. We’ve not published the SL photos shown above before.

We mentioned the entire idea, briefly, in a blog entry called the Wild Rock and Roll era. And then we moved on without pursuing it further, apart from a ‘naturist as rock star’ post I did in January called ‘Hendrix‘. Many elements of those blog posts had been cut and pasted from the original ‘John Smith’ posts we’d planned.

I’m bringing this up today because another of those ‘dandy rock and roll hero’ type suits Harry (or John Smith) used in the original idea came to my attention, with Carson Caiben at the Fab Free blog modelling it (in the context of a theatre visit).

And it has me wondering if there’s any appetite for a series of posts outlining ‘John Smith’s’ sojourn for enlightenment through naturism. Even if there isn’t, it reminded me that there are parallels between ‘John Smith’ abandoning a pop music career for naturism in Beau Brummel, a South African pop star who had minor hits in England. (not to be confused with San Francisco group The Beau Brummels).

He also made a video called ‘Africa’s Naked Tribe’, which can be seen on youtube.

I’ve not decided yet, but there may be some mileage in the whole ‘John Smith’ back story just yet! In the meantime, click the links to read about a pioneer, perhaps the pioneer, of South African naturism.