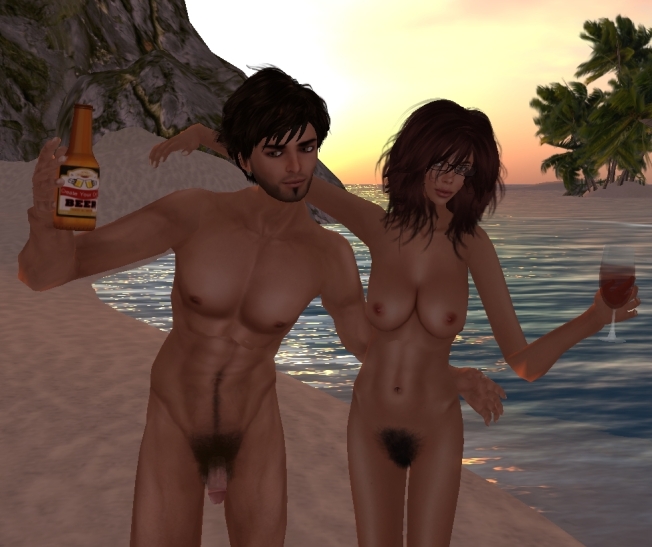 We’re off in the morning to Spain, so I’ll be picking subsequent posts up as ‘Postcards from Spain’ for the next 10 days. That’s a reason to ‘celebrate’ (although the early morning alarm call much less less so).

With children in tow, and also mother-in-law, who loves to fulfil her role as ‘Gran’ and ‘babysitter in chief’, we certainly act responsibly at all times. Where, pre-children, we could go out at 6pm for a quiet drink and still be out after midnight, our ‘partying’ now usually involves a barbecue on the terrace, a glass of wine (or two at most) and sitting chatting after the children have fallen exhausted into bed.

I’ve been over to Zen Creations, where a number of poses are available for free, and there’s no group join fee!

One, called ‘Celebrate’, caught my eye in particular. It comes with attachable wine glass and beer bottle too, and if you ‘buy’ it you can also transfer the prop to the person you’re posing with.

It reminded me of a barbecue we got invited to at a naturist campsite by a river in France. We ate, the drinks came out, and then some guitars and it must have ended up with about 30 people, families and couples, all sitting round the fire in the early hours, singing stuff that came into our heads. We staggered off to our tent around 200am and suffered the next day from dreadful hangovers! 🙂

While those days are behind us, we still have much to celebrate. Going on holiday, the magical world we live in, people, family, togetherness, the great variety of naked bodies all celebrating being alive! The spirit of togetherness naturism fosters, a less to the world.

Speak to you from Spain…probably on Thursday night when we’re all settled in.