Our week in the sun is at an end. Of course we’ve grabbed the last moments of sun that we can, the only things not packed away are my laptop and…my clothes 😦

I shall only wriggle reluctantly into those as we’re practically going down the steps of the apartment.

OK…time to head back to the airport and our flight home. Bet it’s raining when we get there 😦

I’ll close of our week in Spain with another couple of my son’s photos, including yours truly having coffee yesterday afternoon, and myself and my daughter on the beach, digging in the sand while my son wanders off on yet another adventure… (to be fair, he was with Jim, returning from the beach bar with some cold drinks, not unsupervised)

…in case you can’t spot us, above, I’ve circled us, below. 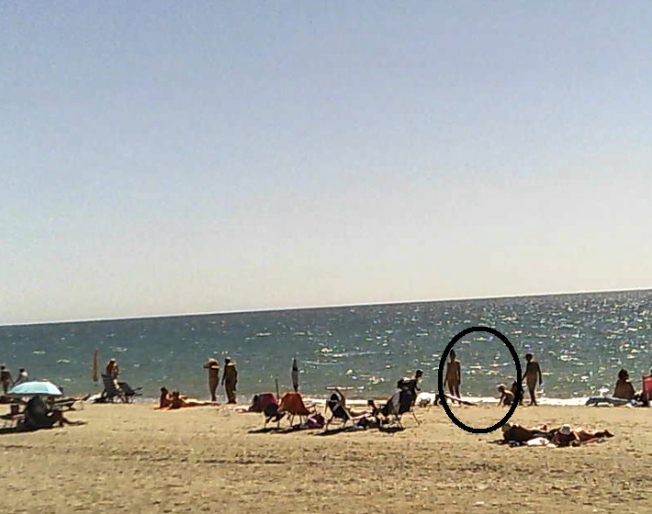 Probably no posts tomorrow, but normal SLN service should return at the weekend.

Our eldest son has reached an age where technology fascinates him and his grasp of it, like most children of the 21st century, is such that he’s far, far better at it than we are. With the younger two slumbering in granny’s company, we headed out for a walk first thing yesterday morning, our eldest boy tagging along with his camera.

He’s also getting to an age where it’s not enough to take photos, but also ‘experiment’ with the end results on his tablet, thanks to various bits of software.

Some are excellent. Whether they turn out this way by accident or some emerging talent, I don’t know. As his mother, though, I’ll suggest the latter. 🙂

He was trailing behind us yesterday and grabbed this shot of Jim and I, the three of us being the only people on the beach a little before 700am!

I’m currently going through some of his images with him to see if there’s any other ‘experimental naturist’ photos I might be able to utilise here. Although I’ve also had to give him a gentle, motherly talk about not infringing other people’s privacy. Nevertheless, there’s some photos I may try and utilise in the blog at a future date.

I’ve posted many times about naturists and their use of towels, something they spread across a seat for hygiene purposes.

Any photographs you see of genuine naturists on the move will often show them carrying a towel over their shoulder for this purpose, and I’m drawn like a moth to a flame by any towel pose in SL.

I was delighted to see another towel I could add to my collection at the Fab Free Cart Wash (K&A Designs cart).

Priced at L$10, it’s actually part of a lifeguard’s swimsuit set but naturally we dispensed with that part of the outfit 🙂 and I’m just wearing the towel part. What I like about it is that it’s a large towel. Many towels are often smaller over the shoulder or around the neck type, but this one looks like a large beach or bath towel slung over my shoulder.