Most of the attendees at Howie’s parties are mostly RL naturists. Those that aren’t are SL naturists with a desire to try naturism in real life. Often, it’s only the lack of local naturist facilities that stops people from participating in RL naturism. I often think of that ‘build it and they will come’ ethos. If we were able to provide more naturist facilities, more naturists would suddenly become visible.

Lastminute.com  did a poll that revealed over half of the UK’s population would bare all on a beach (35% of men, 17% of women).

There’s little doubt that we’re out there.

I mean, that’s over half of us in the UK, which is a relatively body-phobic society.

At these parties we tend to discuss where we’ve been on holiday, where we’re going next, what restaurants we’d recommend in which resort and so on. Another major topic of conversation is -given that we’re all SL users- our favourite SL naturist destinations and…other SL-related stuff.

Poses are, for me, a hot topic as I’m always keen to utilise poses into the photography I use on this page. Which is where the photos (above) come in…

Someone said there was an event on called ‘The Men Jail’, which featured a set of poses called ‘Naughty Santa’. Next thing I know, Howie has teleported away from his own party, only to return five minutes later with the set purchased.

The top photo has a lovely sense of ‘welcome to my party’ about it, the second in which he’s added the strategically placed Santa hat. L$225 for the full set at the Men Jail event.

Just a bit of fun for our Christmas party.

Diego and Camille at the BBQ 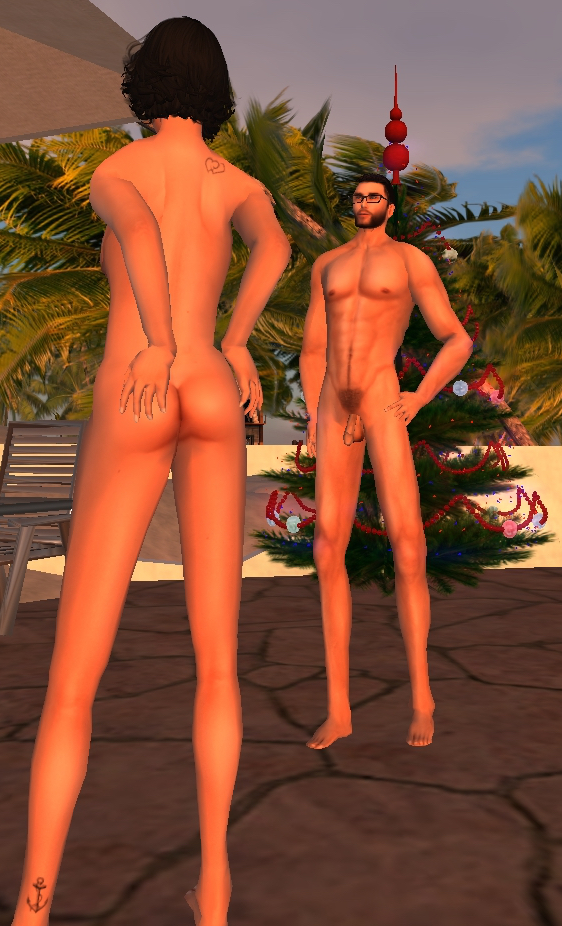 Melanie stayed ‘dressed’ in a net ‘cover up’ that covered up nothing. Here she is talking to Henry

I have to say that, based on observations from when I was at the party, and from other photos received from Harry, things were a little more…cuddly around SLN-HQ this Christmas than previously. Of course, part of this comes down to the props made available from Howie. But the general mood of the party, when conversation drifted to the real world, was that holding someone close in times of real-world uncertainty certainly captured the mood of our times. A year into Trump, 18 months into Brexit (note : this comment isn’t intended to be political, just a statement of fact that these events have created uncertainty, regardless of which side of the Trump/Brexit politics we stand on), too bloody long into the unhinged threat of North Korea…all of these and more dwelt on our collective minds and I picked up on a ‘hold me tight and let’s make it through next year’ kind of mood.

Jill and Hugh get close by the pool

Time for the food!

Howie brings the cake out for Helene’s inspection. This is intended to be a ‘naughty’ Xmas pose (available at KPoses at the Hipster Men’s Event, priced at L$150, but it doesn’t work so well at a naturist event, does it? 🙂 )

While Howie goes off to find a knife to cut the cake up, Helene and David pose for Harry’s camera beside the tree (below)

I’m informed that there may well be a Part 3 (and even 4) to the Xmas party next weekend, but that’s rather dependent on whatever else SL can throw up in terms of naturist partying.