I’ve tried to do articles on the Indian sub-continent and its attitudes to nudity and sexuality before. Most of those articles remain in the ‘drafts’ pile due to me not ever getting an acceptable handle on a culture which I know little about, and SL isn’t exactly thick on the ground with female Indian avatars (in my experience), despite Indians being fairly active in SL.

Regardless of that, a story emerged on the BBC pages a few days before Christmas about an Indian actress and playwright, Mallika Taneja, and her play Thoda Dhyan Se (Be a little careful) in which she strips nude.

That would have some ‘shock’ value, still, in some parts of Europe. So to do so in conservative, patriarchal India????

The play is meant to provoke people into thinking about whether women’s clothing really has any correlation with sexual violence, and that’s an important message to be sent out in India’s rape culture, where dressing in ‘revealing, western clothes’ is given as a defence in rape cases.

“But girls here can’t be like girls in the West. They have to dress decently and watch where they go, who they are with. If they don’t observe these restrictions, they are perceived negatively by men and will be at risk,”, one man is quoted as saying in the article linked directly above. 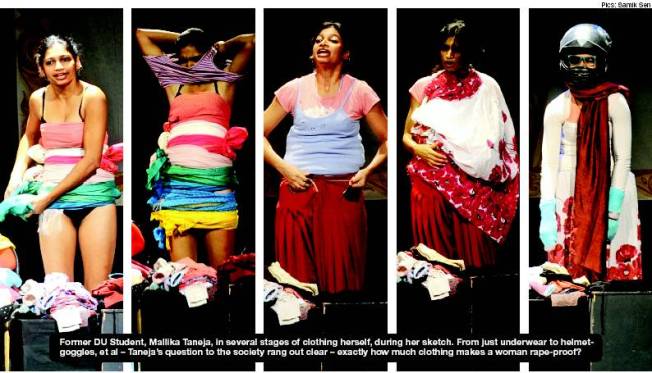 The message of her show? How much clothing makes a woman rape-proof?

Her play is an important message that needs to resonate across India, and if not seen by all Indian males, they should all be made aware that how women dress is never an excuse for rape or sexual assault.

I’m loathe to single India out as a sole location where this ‘asking for it (because of how she dressed/drank/behaved)’ mindset. It exists here in western culture too.

One thought on “Be a little careful (in India)”