A decade or more ago the presence of a camera could have got you thrown off a naturist beach, and still would if you were just there to photograph naked women and then upload them to the internet. And you wouldn’t get off the beach with your film stock intact, or digital memory card in place, even now, if being ‘pervy’ about it.

That’s not to say there’s still not people out there doing just that, taking secret photos and exploiting the subjects.

But in the past couple of years I’ve detected a much more relaxed view to the appearance of a camera. 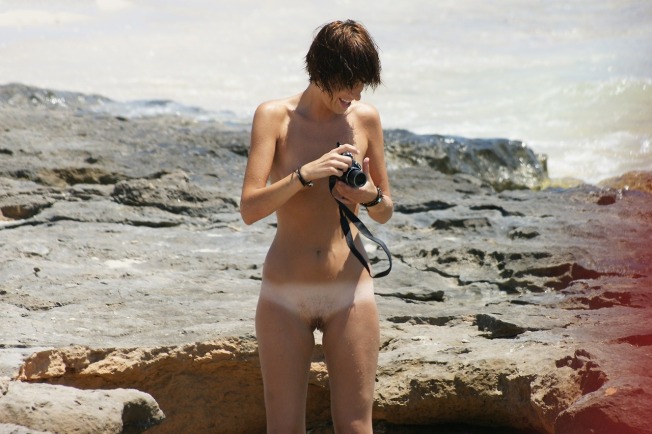 Many beach users will take photos of friends, who seem happy enough to appear nude in front of the camera. Who knows? Some of this is probably being shared (at least in private message form) on social media. The simple fact is that people don’t care quite so much about turning up on the internet any more, at least in some places. In the likes of France or Spain the word ‘naturist’ can be worn as a badge of pride and honour, maybe less so in uptight Britain or the United States, where being a naturist is probably a more secretive thing than being in the Illuminati.

One of my Spanish friends, Mercedes, who has commented on these pages before, says that where she lives most people will have some experience of the naturist beach. They may not call themselves naturist, or be regulars, but they will probably have tried the beach, nude, on one or more occasions.

‘I don’t understand you Brits for whom it is something you keep secret. If people ask me what I’m doing after work, I say ‘the beach’. Friends, colleagues, managers, bosses. They all know which beach. They all know I will wear nothing at all. It does not impact on my employment, my promotion chances, anything. Because many of us use that same beach and are similarly unclothed.

‘My friends and I have a group chat on social media and we sometimes publish photos. Maybe we are naked. Maybe not. I’ve had photographs of me naked where the first comment to me, by a male colleague who saw it was ‘that looked like a red flag day…no swimming’ [Note: the beach operates a ‘traffic light’ system for how safe the water is for swimming purposes] He didn’t seem interested that I was naked. More disappointed for me that our only day off in the week wasn’t a good swimming day’.

From personal observation and primary oral/textual input from friends, do I detect a sea-change in how some people regard their naked beach photos entering the public arena?

3 thoughts on “Cameras on naturist beaches.”